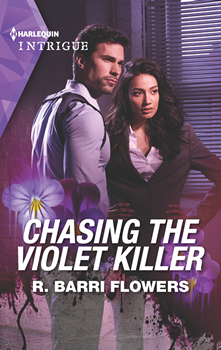 R. Barri Flowers’s latest romantic suspense novel showcases his knowledge of crime scene investigation, which imbues the entire book with authenticity while multiple metaphors add texture. It took a few pages to adjust to his distinctive writing style, but after the first chapter, one can appreciate how well Flowers weaves fact and fiction to create an enjoyable and insightful novel.

At the outset, the reader is presented with a contemporary twist. While the protagonist, Naomi Lincoln, and her uncle are on a video chat, he is murdered.

As a Secret Service agent, Naomi has the skill set to investigate crimes. This works to her advantage but also to her detriment. The dichotomy between her personal and professional lives is evident when she returns home to Pebble Creek, Oregon, to plan her uncle’s funeral and inserts herself into the investigation of his murder.

Complications continue to pile up when Naomi must work with her ex-boyfriend, Dylan Hester. Their temporary partnership formed in pursuit of truth and justice is tenuous at best and contentious at times.

Below is an exclusive interview with R. Barri Flowers, the award-winning criminologist and bestselling author of CHASING THE VIOLET KILLER and more than 100 books—both fiction and nonfiction—for adults and children.

While at Michigan State University, what piqued your interest the most about the “scientific study of crime and criminals”? You started your career as a criminologist and are well known in that field for your expertise. With more than 40 nonfiction books to your name, and after receiving accolades for them, what inspired you to write mystery/suspense novels?

As an MSU student majoring in criminal justice, I wanted to get beyond the acts of criminality in and of themselves and the justice system at work by digging deeper into the dynamics of criminal behavior and the correlates of antisocial conduct. Studying crime and criminality as a criminologist gave me greater insight into this that I was then able to share through my writings with other criminologists, sociologists, researchers, law enforcement, and laypersons interested in the subject matter.

With more than 40 nonfiction books—including academic, criminality, sociology, and true crime—I have been able to establish myself as an authority on deviant behavior, what makes offenders tick, and of course, the processes of the criminal justice system dealing with those who break the law, from investigating through to arrest and incarceration.

Writing mystery, suspense, and thriller novels was a natural progression for me as a writer in using my knowledge on criminality to delve into the world of fiction. Having enjoyed reading mystery novels since childhood, I have always had a creative mind and was able to apply this in writing in the mystery genre.

Moreover, given my nonfiction writings and research, it allowed me to give my mystery and thriller fiction much more verisimilitude than many such novels in terms of credibility and attention to details in getting into the heads of criminals, as well as laying out modern investigative techniques.

In addition to CHASING THE VIOLET KILLER, if you had to name one other book (that you’ve written), what is your personal favorite and why?

That’s a great question. With respect to CHASING THE VIOLET KILLER, I am the first male author in the modern era to write for the Harlequin Intrigue line, which I take pride in as a good fit for my thriller and romantic suspense fiction.

As for a second book I’ve written that I would put down as my favorite, it would have to be my historical thriller, Dark Streets of Whitechapel, which is a fictional account of the infamous Victorian-era serial killer, Jack the Ripper. Having written extensively about real serial killers, including the Ripper, I am a Ripperologist and, as such, thought it would be interesting to take my knowledge on the 19th century killer of prostitutes in the East End of London and reimagine the events as a thriller novel. It was certainly challenging, but I was pleased with the final product and received accolades on the novel.

Which do you enjoy writing more—fiction or nonfiction? Why?

Another great question. I enjoy writing fiction more than nonfiction, as the former allows more latitude in creativity and telling the story with various angles and points of view, whereas nonfiction is much more structured and, of course, factual in the writings, which is necessary for its intended audience.

Where did the idea come from for CHASING THE VIOLET KILLER?

Having routinely done video chats in this modern era of communication, it came to me one day that what if someone fictionally were to witness a relative’s murder in real time during such a video conversation, but not see the face of the killer? And then I asked myself, what if the witness was in law enforcement and had to return home to help solve the crime and rekindle a romance with the lead detective on the case? This was the foundation for CHASING THE VIOLET KILLER, and it flowed naturally from there.

With respect to the witness and heroine being a Secret Service agent, I wanted to step away from some of the usual law enforcement in romantic suspense fiction and try a different agency. It also allowed me to show that the Secret Service is involved in much more than the presidential protection detail—including intelligence, financial crimes, cyber investigations, and forensics.

The knowledge you have of firearms is impressive and imbues your story with authenticity. Have you always loved guns? Did you develop insight while working as a criminologist or did you do a tremendous amount of research?

My insight was developed largely through years as a criminologist, true crime author, and research, along with an appreciation of the seriousness in the proper and legal use of firearms by law enforcement and for self-defense in today’s society, as well as the unfortunate role of illegal guns in many crimes of violence. In all instances, I certainly wanted to present a credible picture of firearms in relation to the storyline.

In your novel, Jared Falcony is easily convinced to share his agent with a different task force in a city where the agent isn’t based. In the real world would that happen, or did you use creative license to suit the story?

In real life, as in CHASING THE VIOLET KILLER, any law enforcement agency can request the use of the United States Secret Service for a criminal investigation, often as part of a task force, in utilizing their special skills, to that effect. The USSS, which has been within the Department of Homeland Security since 2003 as a result of the 9/11 attacks, routinely participates in various investigations with other law enforcement agencies around the country, including homicide cases.

What do you wish other fiction writers did better in regard to crime scene investigation? Do you have one pet peeve?

Well, as it relates to criminal and crime scene investigations, each writer has her/his own style of telling the story and to what degree. That being said, as a fan of mystery and thriller fiction, I prefer stories with more and accurate details on the crime and illustrating advances in both the investigation know-how and technology today that is critical in solving cases expeditiously.

Some authors have been known to learn a new skill to better understand how to portray a character in their story. In CHASING THE VIOLET KILLER, you have a character who effectively uses jujitsu. Has there ever been a time when you have intentionally learned something new just for the benefit of accuracy in a book?

That’s another great question. Though I have never learned jujutsu, it is certainly a useful form of martial arts for self-defense. With regards to accuracy in a novel, I have taken up running and a bit of hiking in scoping wooded territory, if you will, as a natural setting for both victims and offenders in criminality.

Could you please share the secret to being such a prolific author?

I have written well over 100 published books, encompassing various genres of adult and teen fiction and children’s books, as well as academic, criminology, social science, psychology, and true crime books. As to the secret of being a prolific author, it comes down to discipline, dedication, and determination as a writer, along with the joy of writing in different disciplines and expanding my reach to a diverse audience of readers.

To this end, along with CHASING THE VIOLET KILLER, I also have an explosive new legal thriller, Exposed Evidence, and in 2022, two new Intrigue thrillers coming out, The Big Island Killer and Kidnapped on Kauai. Both are part of a four-book Hawaii-based crime series called Hawaii CI.

What would you like readers to know that no one has asked before?

Great question, once more. Let’s see … perhaps that even with many of my waking hours spent working on books, I actually do have a life outside of writing. I love to travel, exercise, watch television, read history books, participate in sports, and celebrate holidays. Life is never boring, that’s for sure. And I wouldn’t have it any other way!

The January 2022 Edition of The Big Thrill