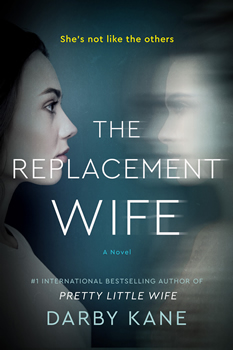 After working on Capitol Hill, a career as an attorney in Washington, DC, and writing more than 40 romance novels, bestselling author Darby Kane now gives readers her second psychological thriller, THE REPLACEMENT WIFE.

Elisa and Harris Wright have worked hard to provide a loving home for their son, Nathan. They want Nathan to have an idyllic childhood—Harris supported and raised his younger brother, Josh, after their alcoholic parents died in a car crash. Now, Josh eats dinner with them almost every night and spends weekends hanging out with Nathan.

Josh’s wife died in a freak accident years before, and his fiancée, Abby, vanished seven months ago. Elisa has tried hard to include Josh in their close family, supporting him through his grief. But that changes when Elisa stumbles across something hidden in a closet in Josh’s home as she looks for the vacuum.

Now, she just wants Josh out of their house and out of their lives. Even being around him makes her ill, and Harris can’t understand her change in attitude.

Elisa wishes she could tell Harris what she’s found that might prove Josh is a murderer, but she’s not sure he’ll believe her. Since a shooting at her workplace 11 months before, she’s suffered symptoms of PTSD. She’s anxious and fragile, still taking meds to take the edge off. Everyone considers her unstable.

When Josh brings a new girlfriend home to meet them, Elisa can’t believe he’s dating when Abby is still missing. Although Josh insists Abby left him, Elisa knows she wouldn’t have disappeared without saying goodbye—they’d become close friends. And how many “terrible tragedies” can one man have?

Now, Josh and his girlfriend, Rachel, seem to always be at Elisa’s house, letting themselves in without even knocking on the door. Rachel is quick to act like Elisa’s ally, but then strange things happen that unsettle Elisa. She doesn’t know if Rachel is a friend or foe.

Elisa knows she’s not crazy, but everyone else is not so sure. What she doesn’t know is that her family is on a predetermined course for implosion. Can Elisa prove that Josh is not who he seems before another of his women turns up dead?

Kane writes the narrative from Elisa’s point of view, but tantalizingly inserts chapters by an anonymous character who’s biding their time to commit the perfect crime. Here, she talks with The Big Thrill about her inspiration, how her prior career as a DC attorney informs her novels, and writing thrillers besides writing romance.

What was the inspiration for the story in THE REPLACEMENT WIFE?

I read and watch a lot of true crime stories. About two years ago, I saw this string of documentaries and Dateline-type shows, each featuring a different family where a man had more than one missing or dead woman in his past. One wife drowned in a bathtub, another disappeared. One wife fell off a cliff while hiking, another got shot by an unknown intruder. The circumstances of these lost women were terrifying, desperate, and sad.

I couldn’t imagine sitting around at Thanksgiving with the family and not noticing how all the women in my brother’s life met with mysterious ends. That got me thinking about how a scenario like that might work, about what we forgive or don’t realize about those closest to us, and about who would be the one to finally notice and speak up.

Why did you go from writing romance novels to writing thrillers? How are the two different from a writing standpoint?

I’ve read mysteries and suspense my entire life. When I started writing romance and figuring out where I fit in the genre, every chapter would include hints of secrets and danger. I realized romantic suspense—where I could add mysteries or villains—appealed to me. As for changing genres, romance novels promise a happy ending for their readers. While I love writing romance, I started considering plots where the characters didn’t end on a happy note and thriller pieces dominated the books, so I knew it was time to try something new.

Everything I learned about craft while writing romance—character development, plotting, voice, setting, point of view, etc.—applies to both genres. I became less of a pantser and more of a plotter when writing thrillers. I’m probably a hybrid, needing to pre-plan pieces of the thriller and spending a lot of time contemplating story components, but I love those moments when the ideas I didn’t expect begin to flow at the keyboard.

How did your career on Capitol Hill and your subsequent career as a DC attorney affect your novel writing?

Both of my previous careers helped me understand that people are multidimensional, flawed, and often very different on the inside from what they project on the outside. That helps when developing the people in my books and what they believe. Being a lawyer also helps, at least a little, with some of the criminal aspects of the thrillers. I know enough to stop and wonder, “could that happen?” and then go look it up.

Tell us about your theme of family members keeping secrets from each other.

Writing about secrets is one of my favorite things. I will also buy almost any thriller or suspense that has “secret” in the cover copy. It’s so intriguing to think about the information we don’t share. (Hopefully the secrets are small and not about killing a spouse!) I love playing with the idea that things happen to people, people do bad things, and that it all combines with other factors to shape who they are and how they react.

The message is about mental health. The main character, Elisa, was involved in a traumatic situation about a year before the book opens. She struggles with anxiety and depression. Most of the people who love her want her to feel better, but no one (including Elisa) is realistic about the power of trauma and the need to address it in a healthy way. There isn’t an appropriate timeline or a “right” way to heal.

My first two thrillers were domestic suspense. The one I’m writing now is more of a psychological thriller. I refer to it as a “star chamber” book. A secret group of professional and powerful women believe the formal justice system has failed… so they create one of their own. It’s tentatively called The Last Invitation and will be out in late 2022.

This career isn’t fair. It doesn’t get easier to write (which is so frustrating). It’s about putting your butt in the chair, writing when it’s hard, pivoting when you must, not being led by trends, not piling on excuses that derail you, and perseverance. Don’t compare your career to others because their careers are irrelevant to yours. Most importantly, don’t read Goodreads reviews. Ever.

Tell us something about yourself your fans might not already know (that doesn’t involve French fries).

First, my love for French fries is absolute.

I grew up in a tiny town in Pennsylvania, in the heart of Amish country. I was naïve and a little awkward, and the idea of writing books wasn’t a dream because it seemed too impossible, too unreachable, to be on my radar. So everyone should have more faith in themselves than I did. Dream big.

Darby Kane is the pseudonym of a former trial attorney and award-winning romantic suspense author. Her thriller debut, Pretty Little Wife, was a #1 international bestseller and a recommended read in The New York Post, The Skimm, Huffington Post, Refinery29, Book Club Girl, Style Caster, and Popsugar. Her next domestic thriller, THE REPLACEMENT WIFE, will be released in December 2021.