True or False? With the Best Swindlers, One Can Never Tell 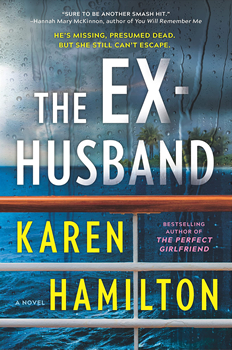 Bestselling author Karen Hamilton takes readers into the art of the scam and its dangerous consequences in her most recent thriller, THE EX-HUSBAND.

A text from an unknown number lights up Charlotte’s phone: “I know what you both did.” Even though Charlotte’s six-month-old venture is legitimate—an event-and-travel-planning business tailoring luxury European destinations or seaside escapes to the rich—she can’t seem to escape her past. Charlotte used to “have the Midas touch.” Now she has no control. She’s been kidding herself “thinking that she could turn over the proverbial new leaf without fully exorcising the past.”

Charlotte “imagines the words truthfully or untruthfully being automatically placed at the end of her sentences, like a comic strip. True or untrue. No middle ground.”

Four years before, Sam and Charlotte met on a Caribbean cruise—she a travel consultant and he a blackjack dealer in the ship’s casino. Sam was suave, handsome, and mesmerizing; Charlotte fell for him completely. Being with him, she’d developed a hunger for the finer things in life; they made her feel special. That’s why she’d been seduced by him.

Together, they scammed wealthy cruise passengers for money and jewelry. But Charlotte always justified it with her belief that they only targeted those who had a sense of superiority and had money to spare. She thought Sam operated by the same rules—they were his, after all—but she was wrong.

Eighteen months ago, Charlotte and Sam’s partnership ended in Barbados when they disembarked from a cruise ship. Sam left her in the hands of customs agents while he escaped with their money. Charlotte vowed to get her share of their spoils back, along with a divorce.

Now, as Charlotte hosts an event for the uber-rich on a private superyacht in the Bahamas, Barbados, Trinidad, and Tobago, someone—a person she’s dubbed “Whoever It Is”—stalks her every move as if they’re watching her. They demand “blood money.” Sam had tried to contact her, but she didn’t answer her phone. Now he’s not responding. It terrifies Charlotte that someone is confronting her for her past wrongdoings.

As the blackmailer continues to hound her, even leaving clues on her pillow in her cabin, Charlotte tries to figure out who is out to get her and why. Soon, accidents happen. She’s certain that Whoever It Is not only wants revenge, but also wants her dead.

As the narrative bounces between Charlotte’s prior life as a con artist with Sam and her current life as a travel consultant, the intrigue of the scam comes to the forefront. It’s evident that even when you try to come clean, the past sometimes leaves a stain that good intentions can’t remove.

In this interview with The Big Thrill, Hamilton explains the inspiration for the novel, how her personal travels have given her a wealth of background, and how she escaped the pandemic by writing during lockdown.

What was the inspiration for the story in THE EX-HUSBAND?

The inspiration came about when my husband worked on a ship a few years ago. He sent me photos of the onboard housekeeper’s amazing towel art, and it got me thinking, “What would it be like for a character to come back to their cruise ship cabin and find something sinister, rather than something fun or creative?” I wanted to develop a character with a secret past, a reason someone would want to frighten them while trapped onboard a ship or yacht. I decided this character would be a con artist, so I researched scams and their impact on victims.

How have your world travels informed your novels?

I love travelling. I miss it, so I pour the destinations I wish I could visit or revisit into my novels. Because I worked for years as cabin crew, I love the sense of being in a different time zone or culture. One year, I visited Seattle in the lead-up to Christmas and shopped at the market for gifts to take home—that’s why the novel features Seattle. I have such fond memories of visiting there, among many other places. I also loved a trip to Barbados as crew—my only time to visit the Caribbean—so I wanted to include it as well.

How did the cruise ship in THE EX-HUSBAND and the Caribbean location give you an escape during lockdown?

I felt fortunate to immerse myself in a different world as a distraction. I was also very lucky that my husband and I could go on a mini-research cruise in December 2019. We went to visit the Christmas market in Antwerp for 48 hours. On our return, the stormy weather delayed us, so I felt trapped out at sea. Although I suffered from seasickness, I recovered enough to explore the ship. It gave me plenty of ideas for the lifestyle Charlotte and her ex, Sam, would’ve had.

Chapters in the book are divided into then and now. I wasn’t sure about the future of cruise ships, so I changed the now sections to a superyacht instead. The world of superyachts was amazing to explore, doing most of my research online. I loved creating The Cleobella, the superyacht in the novel, and designing the luxurious features on board. It was wonderful escapism.

Why did you write Charlotte as such a flawed character?

I wanted to create a character who is tempted by the finer things in life, whether she envies other people online or sees things in real life that she can’t afford. Her ex, Sam, is very manipulative and domineering; he knows how to twist things to make her believe that what they’re doing isn’t wrong. The more time she spends with him, the more he influences her. I wanted her to internally wrestle between what is right and what she wants to believe. Although she knows what she did was wrong, she remains tempted by the amazing lifestyle she lived and experienced with Sam.

Things aren’t always what they seem, whether it’s online or in real life. I tried to explore the difference between the people who work hard to make life easy for others and those who appear to “have it all.” I also examined how envy and greed can drive a character given the right circumstances.

Rival colleagues in a luxurious travel company compete for a lucrative prize on a work trip to Tanzania. They soon realize that someone in their group will kill to win.

Our tutor at the Faber Academy used to tell us to “keep going,” and I think that’s brilliant advice, whatever stage of writing you’re at. I also believe that nothing is ever wasted. I’ve featured parts of books I’ve deleted in later books. Also, when I started writing, I found that entering writing competitions was useful. It taught me to edit to fit the word count. There was also always the hope of winning, which happened once when I came in second. It was a real boost.

Tell us something about yourself that your fans might not already know.

When I worked as long-haul cabin crew, I had little routine, but now I’m a morning person. I love writing early in the morning before everyone else wakes up. I’ve also gotten back into jogging in the early morning. It’s the perfect time to clear my head, mull over plot points, and dream up new characters.