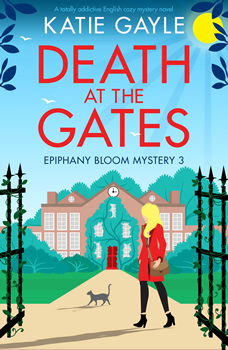 Katie Gayle is actually two South African writers—Kate Sidley and Gail Schimmel, both bestselling authors who write across a variety of genres. Apparently, it seemed natural to try their joint hands at a cozy mystery series—although, they admit, wine was involved.

The series is set in England and their protagonist, Epiphany (Pip) Bloom is a young lady of many talents—at least in her own mind. Her latest adventure, DEATH AT THE GATES, is set at an upper-class girls’ school where Pip goes undercover as a sports teacher—an unlikely role as she isn’t keen on sports and knows very little about most of them. Nevertheless, she soon develops relationships with the teachers and the students. Almost all of them seem to have motives or opportunity to be involved with a clever scam to sell exam papers. Pip feels she’s making progress until the school fete where the murder of one of the parents is discovered. After that, things get a bit out of hand.

If you enjoy a clever, cozy mystery with good laughs along the way (and who doesn’t need a good laugh these days?), then don’t miss the Epiphany Bloom series.

Both Gail and Kate live in Johannesburg, with husbands, children, dogs, and cats. However, unlike Pip, neither of them has ever stolen a cat from a vet.

In this interview for The Big Thrill,  Kate and Gail talk more about the series and writing together.

Epiphany (Pip) Bloom is a delightful character. She’s smart and funny but naïve and poignant at the same time. How did you come up with her, and how do you keep her sparkling through the series?

Our initial vision was that we wanted a hapless heroine—we’d actually pictured the comedy as being more physical. We thought she would trip over things and land on clues. But then she took on a persona of her own, and while hapless, wasn’t quite as hopeless as we’d originally pictured. She was really such fun to write that she sort of carried us along in her wake.

Pip comes with a cast of eccentric characters in tow. Her mother traded in a boyfriend for some llamas in South America, Pip has two tentative romantic interests—an ex-bouncer and a computer nerd, and a sister with truly strange dietary beliefs. Did you have them worked out in advance or did they grow with the series?

We knew that the characters would be unusual and, obviously, hilarious, and we had the mother pictured quite early in the planning, but the rest of the characters appeared as we wrote—sometimes taking on much stronger roles than we expected. One of the things we love about writing is finding ourselves surprised by where the characters or story take us.

Why did you decide to set the series in England although you are both successful writers in South Africa?

We were wary of setting a funny cozy mystery in South Africa—there’s so much history and complexity here, we didn’t know if we could write what we wanted without getting drawn into explanations and discussions. It was somehow easier to step outside of our environment.

Strangely, we hardly even had a conversation about setting it in England. We think that it must have been a partly commercial decision in keeping with the cozy genre, but we can’t remember any conscious thinking about it! Maybe Pip just told us that that was where she needed to be.

Katie Gayle is actually the two of you. What persuaded you to write a series together in the first place, and how does the process actually work for you?

Well, we think that we are cumulatively hilarious. So over a glass of wine, or two, at a Franschhoek Literary Festival, we agreed that we are so funny that we should write a book together. The unusual part is that when we got back to Johannesburg, it still seemed like a good idea. And the even more unusual part is that we actually wrote it. It was picked up by the first—in fact the only—publisher we sent it to, Bookouture in the UK. Now that’s seriously unusual! We’re working on Book 4 together and still having fun, so something about the partnership just works.

In terms of the process, we plot together, and then Kate takes the role of lead writer. Gail travels behind her, adding and tweaking, until we hit a plot challenge and unravel it together. With the latest book we’ve started taking turns running ahead, which Gail is enjoying greatly.

We’ve been very open and honest with each other. We each have to be prepared to have some of our darlings killed, to compromise and to discuss difficult things like time and money and why that line really isn’t actually funny even though you wrote it and you love it like your own child. That last one is probably the most difficult.

Do you design the plot in detail before you start writing and just add the funny bits, or do you just set the scene and see where it goes?

We have found that with joint writing you HAVE to plot quite carefully from the word go, and we have gotten better and better at this with each book. Now, we plot roughly the first half up front and have a good idea of where it will end up. But we are always insistent that we have to leave space for the magic to happen, which it does. It must be said that if Kate thinks of a joke she wants to make, she has been known to change the plot, take a tangent, and write five pages to get in one pun. And we won’t even talk about what happened when she got into Llama Puns.

The thing about writing humor is that you can’t really just add the funny bits. You have to set yourself up for humor—your environment, your characters, their relationships. If you do that right, they all have good comedic potential and then you have to be primed to take advantage of weird and wonderful ideas as they present themselves.

Death at the Gates is peppered with amusing recollections of previous remarkable happenings in Pip’s life. She has a checkered past behind her and a checkered future ahead. This one is the third book in the series. Are you planning more Pip adventures? Or are you moving on to something new?

For now, we are moving on to a new series. We are delighted to have been signed by our publishers, Bookouture, to write a more traditional cozy mystery, involving a heroine called Julia Bird and a naughty chocolate Labrador called Jake and their life in the Cotswolds. As much as we are loving the new world we are making, we miss Pip—so never say never. Also, people really want to know if she ends up with Tim or Jimmy. We know, but we’re not telling.