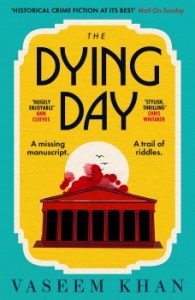 Bombay, 1950. For over a century, one of the world’s great treasures, a 600-year-old copy of Dante’s The Divine Comedy, has been safely housed at Bombay’s Asiatic Society. But when it vanishes, together with the man charged with its care, British scholar and war hero John Healy, the case lands on Inspector Persis Wadia’s desk. Uncovering a series of complex riddles written in verse, Persis—together with English forensic scientist Archie Blackfinch—is soon on the trail. But then they discover the first body… Harking back to an era of darkness, this second thriller in the Malabar House series pits Persis, once again, against her peers, a changing India, and an evil of limitless intent.

A terrific puzzle that challenges their intellectual vanity, but also a learning experience about a period in Indian history that is not well documented in fiction, namely the 1950s, just after Indian independence.

Historical crime fiction uses the past to teach us something about the present. Persis Wadia, operating in 1950s Bombay, is India’s first female police detective. As the lone woman on the Bombay force, she’s consigned to the city’s smallest station, Malabar House, with a gang of fellow ‘undesirables.’ She operates within a society in turmoil. India in 1950 is still reeling from Independence, Gandhi’s assassination, and the horrors of Partition. Yet Bombay remains cosmopolitan, India’s ‘city of dreams,’ where nightmares take root.

Creating The Da Vinci Code-style riddles and trail of clues. I wanted them to be erudite, engaging the reader’s mind in a battle of wits, whilst also showcasing some of the history of Bombay. The really hard part was getting them to rhyme! Of course, this was also a great opportunity because I knew these would hook in that Dan Brown readership!

That Bombay’s Asiatic Society not only houses a 600-year-old copy of Dante’s The Divine Comedy, a treasure for which Mussolini once offered $1M, but also other incredible historical treasures such as a Shakespeare First Folio dated 1623 and a copy of both volumes of A Voyage Towards the South Pole and Round the World by James Cook.

Too often we expect female detectives from traditionally paternalistic countries such as India to be willing to tread softly around their male colleagues just to be able to be allowed to do their job. Persis has none of that grace. She has the social skills of a bull in a china shop and isn’t afraid of stepping on male egos when the need arises.

The fact that this story took shape almost twenty years ago when I was living in India and visited Bombay’s Asiatic Society and discovered that they housed a 600-year-old copy of Dante’s The Divine Comedy. It later occurred to me that it would make a terrific story to see that manuscript vanish. I just needed the right plot and protagonist. That all came together with Inspector Persis Wadia, India’s first female police detective.

Michael Connelly, author of the Harry Bosch series. I love his complex plots and the way he depicts Bosch as a crusader for justice who doesn’t care about social niceties. There’s a lot of Bosch in Persis.

Vaseem Khan is the author of two crime series set in India, the Baby Ganesh Agency series of ‘gritty cozy crime’ novels set in modern Mumbai and the Malabar House historical crime series set in 1950s Bombay. His first book, The Unexpected Inheritance of Inspector Chopra, was a Times bestseller and an Amazon Best Debut, now translated into 15 languages. The second in the series won the Shamus Award in the US. In 2018, he was awarded the Eastern Eye Arts, Culture, and Theatre Award for Literature. Vaseem was born in England, but spent a decade working in India. Midnight at Malabar House, the first in his historical crime series, won the CWA (Crime Writers Association) Historical Dagger 2021.