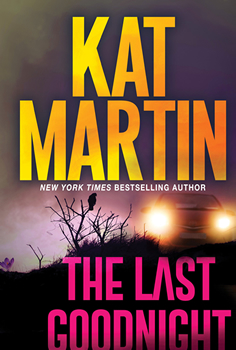 New York Times bestselling author Kat Martin never intended to become a writer. It was her husband who planned to launch a writing career, but after helping him with his first book, she was bitten—and bitten hard—by the creative writing bug. Before long, both Martins were committed to supporting each other in their separate quests to become successful authors.

It was an exciting time, but it wasn’t easy.

“The change was pretty much a disaster for the first five years,” Martin says. “We spent all of our savings and ran up a huge credit card debt, but both of us were determined to succeed and eventually we did! I think my former career as a real estate agent was extremely helpful. I had already developed work habits few writers possess. Setting writing hours each day, and long-term writing goals. In real estate, there are constant ups and downs, money-wise, so you have to budget, and you have to persevere.”

And persevere she did. While her husband pursued a career as a Western writer, Martin was drawn to historical romance and romantic suspense. Her first novel, Magnificent Passage, was published in 1988. Since then, she’s published a staggering 70-plus novels and landed on the New York Times bestseller list more than 15 times. More than 17 million copies of her books are in print, and she’s been published in 20 foreign countries.

With a track record like that, she clearly has an effective writing process, but it’s one she evolved over time. “I started as a plotter,” she says. “Long outlines and knowing the story front to back. As my books became more complicated, I had to become more flexible. Now I know the basic plot, but not what happens in the middle, sometimes not even the ending until I get closer to finishing. It’s a scary way to write, but in order to writer bigger plots, I had no choice.”

As for her writing environment, she prefers ultimate quiet, saying, “I like to see the book in my head.”

With such a demanding publishing schedule, she admits that writer’s block can be a killer. “I find doing research usually helps. Sometimes you run across a kernel of information that gives you a whole new direction and inspires new ideas.” Then she adds a word of advice for beginning authors: “Write what you like to read. Write from the heart and never give up until you achieve your goal.”

For her latest book, THE LAST GOODNIGHT, Martin wanted to write a ranch story set in Colorado. The result was a novel in which a fiery private detective helps a handsome rancher heal his wounded heart and bring his estranged wife’s killer to justice.

“I started with a cold case murder,” Martin explains, “and since ranchers often face extreme hardships, the plot evolved from there.” Asked where the evocative title came from, she says, “I love this title, which my editor and I came up with together. I am generally terrible at titles.”

Not this time. THE LAST GOODNIGHT is a perfect fit for this story’s theme of letting go of the past. Ellie Bowman is a strong heroine, competent and compassionate, committed to her values even at the risk of losing the man she finds herself falling for. Kade Logan is a flawed hero, guarded and often possessive, still haunted by his dead wife’s infidelity and unable to trust the possibility of a new life with a new love. Martin says, “I took a risk with him, because he is so volatile and angry as a result of his past. I was afraid readers wouldn’t have sympathy for him, but the heroine was his match, I think, and perhaps that helped.”

Kade and Ellie definitely strike sparks. They also complement each other. “I generally see how the characters respond to each other,” Martin says. “Kade was tough, so he needed a tough woman who could stand up to him. But he would also want a feminine woman to complement his masculinity.”

If Ellie is Kade’s path toward a fulfilling future, the villain (unnamed, of course) is Kade’s dark mirror, someone as locked inside the past as Kade, but with devastating consequences. Asked if this was planned from the beginning, Martin says, “It just happened. My mind kind of works that way. I liked the way it deepened the story line and the resolution at the end.”

She admits Kade is her favorite character, explaining, “I love cowboys.” Next on her list of favorites are Kade’s brothers, Gage and Edge. In fact, Gage Logan stars in Martin’s next book, The Last Mile, in which the world-renowned explorer finds himself on a treasure hunt.

THE LAST GOODNIGHT covers a lot of ground—modern-day ranching, private investigation, an old mine with a history, and more. Martin relished the opportunity to dive into the historical aspect of the plot. “Lots of fun historical facts about the old days of mining. I’m a history nut, so that was intriguing. I always wind up doing a LOT of research.” In one especially harrowing scene, she blends her own fears with her new knowledge of abandoned mines to evoke a feeling of claustrophobia in the reader.

Like all writers, Martin has her favorite authors. Of her literary influences, she says, “Wilbur Smith is one of my idols. The Eagle is the Sky is my all-time favorite romantic thriller. Kathleen Woodiwiss for hard-hitting romance. Ken Follett. I read all the Jack Reacher books. I like bestsellers, page turners.”

In THE LAST GOODNIGHT, Kat Martin has crafted a page-turner her readers are sure to enjoy.

New York Times bestselling author Kat Martin, a graduate of the University of California at Santa Barbara, currently resides in Missoula, Montana with her Western-author husband, L. J. Martin. More than seventeen million copies of Kat’s books are in print, and she has been published in twenty foreign countries. Fifteen of her recent novels have taken top-ten spots on the New York Times Bestseller List, and her novel Beyond Reason was recently optioned for a feature film. Kat’s latest novel, The Perfect Murder, a Romantic Thriller and final book in her Maximum Security series, was released in hardcover at the end of June 2021. One Last Kiss, a novella and the first book in Kat’s new Blood Ties series, will be available on August 31st. THE LAST GOODNIGHT, a hardcover and second book in the Blood Ties series, will hit shelves on October 26, 2021.