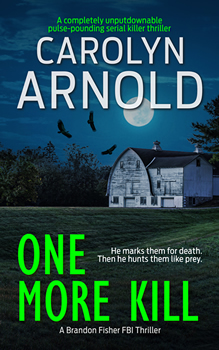 He told her to run. And she did. As fast as her legs would take her, but it wasn’t fast enough…

The bodies of a husband and wife are found in a patch of woods in small-town, rural Arkansas by a neighboring farmer. They were shot with an arrow, gutted, and left to bleed out. The killer also removed their eyes and replaced them with large cat’s-eye marbles. The murder method and signature are too bizarre to point toward an isolated incident, and FBI Special Agent Brandon Fisher recognizes this right away. His boss with the Behavioral Analysis Unit, Supervisory Special Agent Jack Harper, confirms that he’s crossed paths with this killer several years ago, and he has a voracious appetite for blood. In fact, Jack’s seen his work firsthand—six times, three couples, in three states.

Brandon, Jack, and the rest of the team head to Arkansas for one purpose: to bring down the ruthless and elusive serial killer who calls himself “the Leopard.” Versatile and adaptive, this madman hunts his prey like a wild, hungry cat—tracking them, then striking with swift viciousness. But just as the FBI think they might finally be getting closer to the Leopard’s true identity, he adapts his method and starts killing people faster than ever before.

Racing to catch up and struggling to get one step ahead, the FBI comes to uncover buried family secrets that aid the investigation—while at the same time, flipping it on its head. Suddenly, the hunters are now the hunted. And while this case has haunted Jack since he joined the Bureau, things are about to get more personal and dangerous than he ever would have imagined. If he and his team aren’t careful, one of them—or someone they love—may become the Leopard’s next victim.

The Big Thrill caught up with award-winning author Carolyn Arnold to learn more about her latest thriller, ONE MORE KILL:

Life can take turns we never expected, but it’s how we react to these twists in our path that come to define us and influence our experience.

I love being able to tap into the dark minds of serial killers and find out what makes them tick. Crime fiction also makes a reader think, and by doing so, the reading experience becomes immersive. The reader is not just following along with a story; they are part of it.

This is a rather complex plot with lots of moving parts, and it was challenging to make sure they all lined up. The killer himself is very complicated—his motive and his method—and it took some time to understand him enough to present his story clearly on the page.

Well, as with all the books in the Brandon Fisher FBI series, the story is told in multiple points of view and switch from first person for Brandon to third person for everyone else.

Carolyn Arnold is an international bestselling and award-winning author, as well as a speaker, teacher, and inspirational mentor. She has several continuing fiction series and has many published books. Her genre diversity offers her readers everything from cozy to hard-boiled mysteries and thrillers to action adventures. Her crime fiction series have been praised by those in law enforcement as being accurate and entertaining. This led to her adopting the trademark POLICE PROCEDURALS RESPECTED BY LAW ENFORCEMENT™.

She currently lives near London, Ontario, Canada with her husband and two beagles. To learn more, please visit her website.

The Dying Day by Vaseem Khan

Death on the Shelf by Allison Brook