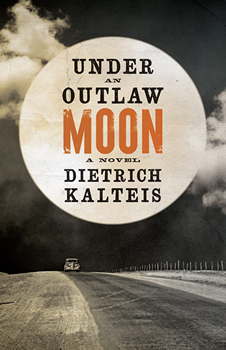 Not many teenagers celebrate their 16th birthday by robbing a bank. Of course, not many 16-year-olds marry an aspiring bank robber, either.

Dietrich Kalteis’s UNDER AN OUTLAW MOON is based on true-life couple Bennie and Stella Mae Dickson, who meet at a bowling alley and fall for each other soon after. In order to have the life they want—marriage, kids, the house—Bennie decides the quickest route is by robbing a bank. Their first attempt is successful, but doesn’t bring in all that much cash. They pull off another—bigger—heist, and the manhunt is on with FBI Director J. Edgar Hoover taking a special interest in their capture and declaring them “Public Enemies 1 and 2.”

Dietrich Kalteis’s previous work is mostly in crime fiction. So what drew him to Bennie and Stella—and what made them worthy of a novel?

“While researching for another novel set in the 1930s,” Dietrich says, “I came upon their story and was intrigued. They were newlyweds when they committed their first bank robbery around Stella Mae’s 16th birthday. After waiting for the time lock on the vault to open, they got away with just over $2,100, then drove across the state border and hid out at Bennie’s family farm in Tyler, Minnesota.

“It wasn’t long before Bennie was talking about a bigger score,” Kalteis says. “Walking into the bank in Brookings, South Dakota, they were faced with another time lock on the vault—having to wait an hour and a half this time. Bennie posed in plain view as a bank inspector, his shotgun and pistol hidden out of sight, compelling the bank staff to deal with the customers as if nothing was wrong. Stella waited by the door as more than 50 customers came and went to do their banking. They got away with over $17,000 in cash, and another $16,000 in stocks.

“Having committed only two robberies—and being dubbed ‘The Time Lock Bandits’ by the media—and despite the lack of violence,” Kalteis says, “they came to the attention of J. Edgar Hoover, who considered them Bonnie-and-Clyde copycats. So Bennie and Stella quickly found their way to the top of the FBI’s most-wanted list, the agency putting its resources and manpower behind the manhunt to bring them down—dead or alive.

“In getting to know them,” Dietrich says, “I found two decent human beings clinging together, one wounded and one misguided. There was a sense of fairness about Bennie in the way he dealt with others, and in spite of her naivety, there was a depth to Stella that went well beyond her years. I came to understand how the hard times of the era shaped them and their choices. There was kindness in them; they were devoted to each other and their families. How they were depicted in the media was in sharp contrast to who they really were, and how they were hunted down was brutal and unjust.”

The American public has always been fascinated with bank robbers—I asked Kalteis why.

“Particularly in the era of the ’30s,” he says, “bank robbers held that folk-hero status due to their crimes being aimed at institutions that had failed the common man. It was a time of dust storms, drought, rising unemployment, and hardship across the American Midwest. Land prices and farm income fell to an all-time low, leaving many families staring at a bleak future. Although there were government relief efforts, the only things on the rise were hopelessness and taxes. To the public, the bankers were the villains, foreclosing on mortgages and having families thrown off their land. So the bank robber came to be seen as a modern-day Robin Hood: someone bold enough to strike back against a system that seemed rigged against the common man.”

So what did the research process for this novel look like?

“I read everything I could find on the Dicksons and life during those times in the Midwest,” Dietrich says. “There were several books on the subject, plenty of FBI files, daily newspaper clippings, and personal accounts. Once I compiled the details I wanted to include, I crosschecked every fact and planned out the sequence of events, adding the color, fleshing out the characters, and bringing the scenes to life. This was a departure from my usual approach for writing fiction where I begin without an outline, researching as I go, and moving on scene to scene.”

UNDER AN OUTLAW MOON is very dialogue-driven. What was it like to find Bennie and Stella’s “voices?” How much of their scenes together were based on research and how much came from Kalteis’s novelist’s brain?

“Once I got to know them through my research,” he says, “it was easy to give them distinct voices. Writing dialogue-driven scenes supported the telling of the story two-fold: It helped me paint my version of their 1930s world, and it was also important to show who they were beyond the tainted portrayal of them by Hoover and the media. What is revealed beneath a character’s words can say so very much about them and who they really are.

“That’s the part I love best,” Kalteis says, “when the characters come to life and do the talking, and I feel like I’m just typing their words and letting them carry the scene. I wrote the novel for a modern-day reader to understand the customs, lifestyle, and attitudes of a bygone era, so there remained a fine line between taking liberties and staying true to actual events. The fiction couldn’t stray far from the facts.”

The story is told through three different POVs: Bennie’s, Stella’s, and FBI Agent Hamm’s. What were the challenges and benefits there?

“I chose to tell each scene from the character’s perspective that best suited the situation,” Dietrich says, “switching from Bennie to Stella, and occasionally telling it through the eyes of the FBI’s man, Werner Hanni, who Hoover referred to as ‘Hamm.’

“Changing perspectives from scene to scene wasn’t a challenge. It allowed me to slip in bits of backstory and aspects of personality through their individual thoughts, words and actions. This tells the reader so much about who each of them was, doing it without the need for additional narration, which kept the wording economical and helped to move the pace along.”

If Kalteis could put his dream panel together for ThrillerFest—participants need not be living to be invited—who would be on the panel, why, and what would the topic be?

“Not your typical ThrillerFest lineup,” Kalteis says, “but writers who are sure to thrill. I chose those who’ve been a strong influence in my life—who have the kind of greatness I’d like to be in a room with. The panel would include John Steinbeck, who wrote some of the finest novels ever written. There would also be Leonard Cohen, an extraordinary poet, novelist, songwriter, and fellow Canadian. I’d add Harper Lee, who wrote my all-time favorite book, which I’ve read over and over throughout the years. Charles Bukowski would have to be there because of his outright brilliance.

“Lastly, throwing caution to the wind,” Kalteis says, “and after frisking him for weapons, I would include Hunter S. Thompson as the moderator, somebody sure to ask the panel questions that would be completely out of the box. Hunter may agree to come, but he’d likely insist on choosing the topic.”

A panel of thrilling writers who are not thriller writers? I’d sit through that.

Dietrich Kalteis is the critically acclaimed, award-winning author of ten novels. His debut, Ride the Lightning, was hailed as one of the best Vancouver crime novels. And fifty of his short stories have been published internationally. He enjoys life with his family on Canada’s West Coast.