Just a Terabyte Ahead of His Time

When it comes to British crime fiction, Peter James stands on top of the world.

He’s sold more than 20 million copies of his work in the UK and elsewhere and he writes from atop a 70-foot tower in Jersey—his home in the British Isles. There, with his 360-degree view of the world, he can see across the English Channel to Normandy and the lush Jersey countryside.

The island of Jersey was famous for cod fishing in the 18th and 19th centuries. In 1815 three brothers who’d made a fortune in the trade each bought a house and built a tower—ostensibly so they could keep watch on their cod fishing fleets. But in reality, it was an ego thing, each trying to outdo the other with a higher tower. One is long demolished, but two remain. One is now part of a local school, and the other is part of Peter James’s home for the past three years.

His one concern each morning, he says, is forgetting his laptop on his way up 72 steps to his office, where he presides over a media world of his novels, television shows, and movies. But for all his success climbing the literary ladder—with or without his laptop—it is not reflected in the United States, where his sales are good, but not exactly spectacular, as they are on his home turf.

This is a man who once owned his own internet provider company, owns a television/movie production company, has made movies and television series, and has published more than 30 novels.

In 1993, he was ridiculed for going digital with a novel—putting it on two floppy disks for fans to read on their computers. He was bashed by critics wondering what fool would ever do such a stupid thing like digitizing a novel?

He was a terabyte ahead of his time.

Perhaps James doesn’t think like other writers, but he does know a thing or two about stories—whether in print, on-screen, or by being a pioneer in the digital world. James has sold 20 million copies of his novels during his long career. Today, he and Ian Rankin share the number one sales ranking for crime novelists in the United Kingdom. Yet, surprisingly, James sells more novels in Germany than England and is a crime novelist rock star in Russia.

But the United States?

He’s been on the New York Times bestseller list, but he acknowledges his sales have been inconsistent around its edges. “Fleetingly,” he calls it. So what is it that prevents him from becoming a superstar in the US just like he is in other countries around the world?

“There’s a very big disconnect called the Atlantic Ocean,” he says. The cultural divide goes both ways. “There are hardly any US writers who make the lists in England,” he says. John Grisham, sure, and a handful of other major US crime novelists like Michael Connelly.

“Americans like what is familiar to them,” he says. And when you look at US authors’ sales in the UK, you can say the same about the Brits.

“When Americans read your crime thrillers, you understand the way the Los Angeles Police Department works,” he says. But Americans are not as likely to understand how a police constable functions.

Americans tend to either be clueless or cozy when it comes to British crime writers. Most think of British authors penning whodunnits where they roll the dice to see if Colonel Mustard commits a crime in the study with a pewter candlestick. Or maybe it’s the lead pipe or revolver.

All of this is not to say James’s popularity is not growing in the States. His novels have been turned into movies and cable television series that have filled his bank account. But he will have to keep working—just as he’s done all his life—to expand his imprint in the US.

James has had both a typical and an atypical career as a writer. For years he had a roller coaster ride until he found his footing and blasted off like a rocket with Dead Simple, his 2005 debut of Detective Superintendent Roy Grace. The series has kept his career pointed in one direction ever since. No dips, no dives. Just straight up.

James isn’t one to forget his struggles. He always wanted to write and started his journey winning a poetry contest at 15. He had his heart set on attending Oxford and majoring in English. For his 18th birthday, his father gave him one of his most cherished gifts, a typewriter. But instead of Oxford, James enlisted in a British film school.

He didn’t abandon novel writing, however. After graduation, he sent his first novel manuscript to a New York literary agent, Kurt Hellmer, where it languished. Meanwhile James continued to write novels and look for a job in the British film industry. He couldn’t find one, so he moved to Canada, where his uncle helped him get a part-time gig working in television on a show for preschoolers called Polka Dot Door. It starred a gaggle of puppets. When a producer didn’t show for work one day, James was hired to write scripts.

Hellmer—the agent who had yet to do anything with James’s manuscript—was not pleased. “You asshole,” he wrote, “you really think you’re going to write a novel after writing all day?”

Undeterred, James worked with several friends and acquaintances to raise $60,000 to produce a Canadian horror film, Children Shouldn’t Play with Dead Things. It was a success, so he continued to make horror flicks for a few more years. Then he got a yen to make a comedy. The result was Spanish Fly, starring British comedian Terry Thomas. It was a flop and almost bankrupted him.

Looking failure in the face, he returned to England. He recalled his agent’s advice to find a mindless job, which would enable him to focus his creative juices on his own fiction. So he began working in the family business of making the queen’s gloves. The family firm has counted the royal family among its clients since Queen Elizabeth’s marriage to Prince Philip in 1947. In 1979 the family firm was granted a royal warrant as glove manufacturer “by appointment to Her Majesty the Queen.”

James noted he has something in common with another successful British writer, William Shakespeare, whose family was also in the British glove business.

During this time, James read in the London Times that there was a shortage of spy novels in the literary world, so he wrote one, Dead Letter Drop, and sent it off to Hellmer in New York. He quickly learned why he hadn’t heard from his agent for a while. Hellmer had died five years earlier.

James found a new agent in England, Jon Thurley, who got James’s first novel published in Great Britain. A total of 1,800 copies sold. A second book was equally as popular. After a bad sales performance on number three, he went back into the film business.

“I thought I didn’t have what it takes to become a successful author,” James says.

One day he was talking to a friend of his sister-in-law who worked at Penguin.

“Why are you writing spy thrillers?” she asked. “You don’t know their world. People who read are smart. You won’t be a success unless you can research something.” Spies, after all, are not the most open people when it comes to talking about their work.

So James tried his hand at horror novels with varying degrees of success. He became known for his horror, a declining genre at the time. Then he tried psychological thrillers with limited success.

During this time, his home was burglarized, and the cop who investigated saw James’s writing files on his desk and inquired. He offered to help James if he ever wanted to write police stories.

Soon, James was at a barbecue at the policeman’s home, along with 30 other cops. It was eye-opening. “No one sees more in a 30-year career than a police officer.”

He soon became “part of the furniture” at the Brighton Police Station, gradually earning their trust.

His first police UK bestseller, Possession, was published in the United States in 1988. It did not do well in the States. He was still on the roller coaster. “It took a while to recover from that,” he says. That one book would later influence the skepticism some publishers had for his books in the US. 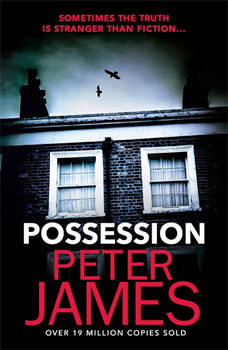 Finally, in 1997, he met Detective Chief Superintendent Dave Gaylor, a young police homicide detective. “I’ve never seen an office so untidy,” James says. It was filled with blue plastic containers, the files of 35 unsolved murders. Gaylor explained he was the last chance for the victims’ families.

And thus began a friendship that lasts to this day. James used Gaylor as his role model for his Roy Grace crime series. For the past 18 consecutive years, James’s novels have hit the top of the London Sunday Times bestseller list.

James credits much of his success to his diligence about his series. “I was an avid reader as a kid. When I hit mid-teens, it seemed as authors got more successful, they got lazy. I vowed if I was ever lucky enough, I would try to raise the bar with every book I wrote. That’s my challenge.”

“I would write if I wasn’t paid because I just love doing it. What I love most in my career now is I can pick any subject I want to write about because I love learning. And it’s great to help other writers.”

“I feel incredibly grateful in the people who supported me and believed in me. We need ability and perseverance. I think Churchill made a wonderful comment when he said, ‘Success is the ability to go from one failure to another with no loss of enthusiasm.’”

James is not just grateful for help along the way. He has created a foundation to return the favor. He not only gives to causes he believes in but supports other writers. He understands the ups and downs of the business as well as any writer, maybe more.

“I went from spy thrillers to horror, a brief profitable spell, then fell off a cliff, then psychological thrills were okay—but oh, I couldn’t shake off the horror tag. Finally, crime thrillers made for my great success.”

And for the last 18 years, it’s been a smooth ride for him—but one still filled with plenty of thrills for his readers.