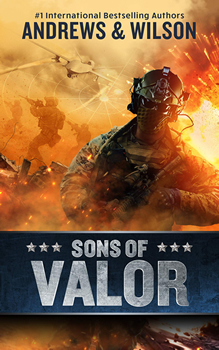 Navy SEAL Keith ”Chunk” Redman has been one of the military’s top doorkickers since the day he pinned on his trident: loyal, single-minded, lethal. Tasked to lead a new, covert team of Tier One SEALs—the most elite special operators in the world—Chunk can no longer simply rely on the status quo. To safeguard America, he needs help to stay a step ahead of its adversaries.

Brilliant at spotting patterns in the data that others miss, ex-CIA analyst Whitney Watts sees evidence of a troubling link between illicit Chinese arms sales and an attack on a US military convoy in Afghanistan. If she’s right, it would portend not only massive casualties, but a devastating threat to global stability.

From the ashes of a never-ending war, a new generation of terrorists has arisen: sophisticated, tech-savvy, and hiding in plain sight among America’s allies. Battered by the Taliban and by the West, they call themselves al Qadr—Power and Destiny—and they’re determined to wrest back control of their homeland. Armed with a powerful combat drone, they can strike with deadly precision at US forces in the region—but their ambitions reach far, far beyond that.

The new Tier One’s first mission will require them to not only prove themselves, but to stop an enemy who’s using military tactics against them. Chunk and his team aren’t just the tip of the spear; they’re America’s first, last, and best counterterrorism defense. And they couldn’t have arrived at a more urgent—and perilous—time.

SONS OF VALOR is our first novel we’ve written as a “shared world” book. The hero of the story, Lieutenant Commander “Chunk” Redman is a popular supporting character who made appearances in our Tier One series. Chunk was clearly a fan favorite, and we loved his character, but we had our doubts about whether a publisher would support a crossover Tier One series. Thankfully, Blackstone Publishing embraced the idea, loved the character, and the Sons of Valor series was born.

First and foremost, we hope readers take away that the world of counterterrorism operations exists in shades of gray. The situations our characters find themselves in are never black and white. The minute you think you’ve figured out the rules of the game, the rules change. And the “bad guys” aren’t so easy to hate, once you get to know them. Every actor in a conflict has a history that’s shaped them into the person they are, and sometimes the villains are as sympathetic as the heroes.

The war on terror has now become a generational conflict. We have men and women serving at the pointy tip of the spear who weren’t born when 9/11 happened. There are terrorists fighting against us who weren’t born with Osama Bin Laden was in charge. Today’s conflict is complicated because two generations of war fighters are involved and the new generation has a very different take on the conflict than its predecessor. This is difficult to articulate in PR materials, but is woven into the narrative.

Navy veterans Brian Andrews and Jeffrey Wilson are the writing team behind the #1 bestselling Tier One series. Brian is a nuclear engineer and Park Leadership Fellow who served as an officer on a fast-attack submarine. Jeff is a trauma/vascular surgeon who conducted combat operations with an East Coast–based SEAL team. Their other novels include the Shepherds series and installments in WEB Griffin’s Presidential Agent series.