So Many Ways to Disappear 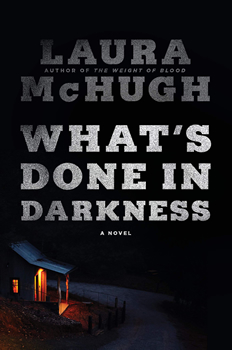 In Laura McHugh’s stunning fourth novel, WHAT’S DONE IN DARKNESS, a teenage girl is kidnapped in broad daylight from her family’s roadside produce stand in rural Arkansas. When Sarabeth Shepherd is released in Missouri more than a week later, her ordeal is far from over; unable to give authorities any details that could help identify her captor, Sarabeth is victimized all over again when police refuse to believe she was actually kidnapped.

Five years later, Sarabeth—now going by Sarah—has cut ties with her fundamentalist family and reinvented herself in the suburbs of St. Louis, where she works at an animal shelter and does her best to keep the past where she thinks it belongs. But when another girl is abducted in a case that bears disturbing similarities to her own, Sarah knows she has to do whatever she can to help find the missing girl, even if it means returning to the home she fled—and whatever nightmares lie in wait for her there.

With every novel since 2014’s The Weight of Blood, McHugh has exceeded the lofty expectations set by her Thriller Award-winning debut. In her latest interview with The Big Thrill, she discusses the cases that inspired her new novel, the unexpected direction it took, and her fascination with the dark underbelly of the Ozark region.

What was the germ of inspiration for this book?

I was interested in two kinds of stories that I had been seeing a lot of in the news. One was women who had been abducted and later set free. The unsolved Sherri Papini case was fascinating to me. She was released after a month of captivity, and her account of that time didn’t give investigators much to go on. There was a sense that she couldn’t tell the whole story, and I wondered what had happened to her. There were also a lot of cases where children were abused or murdered, and no one knew about it for years, because the kids were isolated from the outside world. Neighbors didn’t know the children existed, or the parents claimed the kids were being homeschooled, or the families kept to themselves for religious or cultural reasons and no one wanted to interfere. I ended up combining a bit of both of these types of cases in the novel.

Your books often seem to go in directions you didn’t necessarily expect when you started writing them—you didn’t set out to write a thriller with The Weight of Blood, or a haunted-house story with Arrowood. In what unexpected ways did WHAT’S DONE IN DARKNESS evolve as you wrote it?

I started out writing about a girl who was abducted and let go. I didn’t know that it would become a story about an evangelical religious community where girls are subservient and forced into arranged marriages within the church. I found myself immersed in the world of religious homeschooling, child brides, and extremist cultures.

Belief is an important theme in the book; Sarah is as damaged by not being believed as by the kidnapping itself. What moved you to explore that topic?

I had read about so many cases where girls or women who had been victimized were dismissed and disbelieved. It seemed to be the standard response—a woman tells us something happened to her, and we question whether she’s telling the truth, whether she’s making it up for attention, whether she misinterpreted it, whether she wanted it, whether she brought it on herself. It’s doubly traumatic to be victimized and then doubted, and in that situation, you might even begin to doubt yourself. There were several cases where women had survived abductions only to be accused of faking the entire ordeal, and I wanted to explore that from the survivor’s perspective. How do you move forward and heal when no one believes you? How do you find justice when no one believes a crime was committed?

Sarah is probably my favorite character you’ve written so far, which is saying a lot. Do you ever find yourself thinking about your protagonists after their stories are told? Are there any whose lives you’d like to revisit?

I do get attached to my characters while I’m writing—you get to know them, and care about them, and they’re constantly on your mind while you’re writing their story—but I usually cut them loose once I finish a book and start a new project. Every once in a while, I wonder what a new chapter of their lives would look like. I wonder if Lucy left Henbane, if Arden was finally able to move on from her tragic past. If I revisited Sarah, I think she’d be embracing her new life and probably searching for other missing girls.

You wrote your first novel after being laid off from your job as a software developer. When did you realize writing could be a career?

Not until the second book sold. There are no guarantees in publishing, and it doesn’t offer things like health insurance or a retirement plan that you might get with a traditional job. I’m grateful for each contract, and I always worry it could be the last one. I’ll keep writing books as long as I can keep selling them, but I haven’t reached a point where I feel safe in my career. I check job listings and try to figure out what jobs I might qualify for if I can’t make it as a novelist. For now, though, it’s really a dream come true to be a working writer.

Besides familiarity, what is it about the Ozarks that keeps you coming back to the area as a storyteller?

It’s a beautiful, complex place with an interesting culture and history. To me, the wildness and isolation and tight-knit communities are fascinating and create the perfect foundation for a dark mystery or thriller. So many hidden places, so many secrets, so many ways to disappear.

What do books and movies/TV tend to get wrong about the region?

I’m not bothered by depictions of the Ozarks in books or shows—truth is stranger than fiction, and you can always find something worse in real life than anything you see onscreen. People sometimes get upset, thinking we are stereotyped as hillbillies or meth heads, our hometowns rundown and steeped in despair, but there’s some truth in it. We are not a monolith; there are good and bad people here just like anywhere else. There are horrific crimes committed in rural communities, and poverty and drugs and lack of opportunity are real problems here, and you could say the same about almost any part of the country. I think some folks’ anger comes from the fact that most Ozark-based shows and books (including my own) are crime-related, so, naturally, these stories focus on the criminals, the dark underbelly of the region. It’s fiction, and it’s meant to be entertaining, not to be a perfectly factual representation of a diverse area. My books always have good characters along with the bad, and some hope amid the desolation, but occasionally readers will complain about what they see as a negative depiction of this part of the country. My suggestion to them is to create the art they would like to see, to show their home as they’d like others to see it. My stories will continue to explore the dark side.

Can you say anything at all about what’s next for you?

I have a fifth book under contract with Random House, and I have written the beginning and the end and am now working my way through the middle. It’s set in a creepy Missouri town with a meatpacking plant and centers around a missing person.