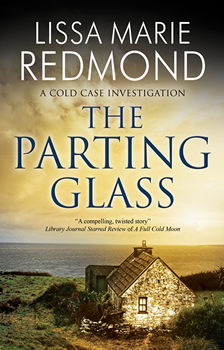 Lissa Marie Redmond was born and raised in Western New York. As a detective, she handled a number of high-profile cases and appeared on numerous television shows, including Dateline, The Nightmare Next Door, and Murder by Numbers. After spending 22 years in law enforcement, including stints as a detective in both the Special Victims Unit and Cold Case Homicide squad, she retired to pursue a “normal” life—and decided to become a writer instead.

However, writing has always been a part of her. “I’ve always been an introvert and bookworm. I can’t remember a time when I wasn’t writing,” Redmond says. “One of my earliest memories is asking for a typewriter for Christmas. All the other kids were unwrapping Cabbage Patch dolls and Star Wars action figures, and I got a little metal and plastic contraption that I had to bang on to get the keys to work. It was the best childhood gift I ever received!”

Redmond writes the Cold Case Investigation series, A Full Cold Moon being her latest. The Secrets They Left Behind, a new standalone thriller, came out in April from Crooked Lane books. Her short fiction has appeared in numerous anthologies, Down & Out: The Magazine, and Mystery Tribune. Her most recent book, THE PARTING GLASS, will be published on July 6, 2021, and is available for pre-order.

In this Ireland-based thriller, an old wound forces Cold Case Detective Lauren Riley onto Injured on Duty leave. Unless she rests, she faces the threat of early retirement. However, dreading the prospect of doing nothing for six months, Lauren renews her private investigator license.

She’s soon contacted by Sharon Whitney, the ex-wife of wealthy Buffalo resident—and suspected mob boss—Howard Whitney. During their bitter divorce 20 years earlier, a Picasso painting was stolen from their home and never recovered. After the main suspect passes away from ill health in Ireland, Sharon hires Lauren to locate the painting—before her ex-husband does.

Lauren expects a low-stress fact-finding trip, yet arrives in Ireland to discover suspicions around the suspect’s death, and his home ransacked. With the clock ticking, uncovering the truth behind the painting’s disappearance may be far more dangerous than Lauren imagined.

When developing the idea for THE PARTING GLASS, Redmond wanted her detective protagonist to investigate something other than murder. Art theft has always fascinated her, and her search for a long-lost Picasso took her in totally different directions.

THE PARTING GLASS was written entirely during the COVID-19 lockdown, so all the research was virtual. Luckily, Redmond worked with cold case homicides for eight years. Therefore, this talented author—who’s also a member of the Vidocq Society, which provides pro bono expert assistance to the law enforcement community working on cold case homicides—can lend authenticity to all her books where the “dogged pursuit of justice” is a prevalent theme.

“I also spent a lot of time on the phone with a retired FBI agent from their art theft squad; Facetiming my husband’s cousin who lives in County Kerry, Ireland; and emailing with writer and now retired Garda John Galvin,” she says. “I really had to rely on my sources to get all the details right.”

With regards to setting, readers will see a lot of real-life places: Killorglin, Dublin, Glenbeigh… but the book’s townland of Keelnamara does not exist. Though Redmond doesn’t travel specifically to get inspiration, a girls’ weekend in Iceland turned into the background for the fourth book in her series, A Full Cold Moon.

She is currently working on her sixth book in the Cold Case Investigation series. It’s more of a locked room mystery and has been a fun challenge to write as she works to give readers a delicious whodunnit where the truth isn’t completely obvious. How to accomplish this?

“Getting the clues and red herrings in just the right places takes a lot of attention to detail,” she says.

Lissa Marie Redmond is a retired cold case homicide detective. The author of the Cold Case Investigation series, Lissa also wrote the standalone thriller The Secrets They Left Behind. Her short fiction has appeared in numerous anthologies and publications. A member of Sisters in Crime, Mystery Writers of America, and International Thriller Writers, she lives and writes in Western New York with her family.