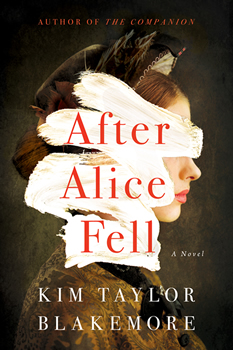 In the summer of 1865, the nation is just beginning to heal from the bitter Civil War. The signs of the war are everywhere—in the man with one arm on the street corner, the empty chair at the table, the still-bitter ring of names like Shiloh and the Wilderness.

As if this wasn’t enough to bear, the narrator of Kim Taylor Blakemore’s lyrical new historical thriller AFTER ALICE FELL must also cope with the guilt—and mystery—of her younger sister’s death at an asylum in rural New Hampshire. As Marion Abbott delves deeper into 24-year-old Alice’s death, allegedly during a fall from the roof at Brawders House Asylum, she begins to ask questions about herself, her family, and whether her sister’s death was an accident, suicide, or murder.

That’s the premise and setting for AFTER ALICE FELL, a deeply researched and richly written novel from Amazon imprint Lake Union Publishing, which has been generating a string of bestselling historical novels featuring iconoclastic female characters.

“It was just a time of flux right after the war with a sense of unease,” Blakemore says of the Civil War setting. “As a writer, you build in that feeling of unease.”

Clearly, the novel required a great deal of research into the time period, on everything from Civil War medicine to the dynamics of 19th century families.

The setting is the same textile mill town as Blakemore’s earlier novel, The Companion. The rural town is isolated and insular, a place where people are not expected to stray much from the norm. And yet, the residents extend a gruff kindness to one another.

“I just love these towns,” Blakemore says of rural New Hampshire, with the location in the novels being a blend of real places.

She toured with a local historian to get a sense of what once was, even exploring abandoned sites where towns faded away when they found themselves too far from railroads and the economic lifeline these provided.

Blakemore likes to visit locations as much as possible. She describes it as, “Going, walking, feeling, smelling. It’s really weird little things, like the sound of the cicadas in the trees; that’s why I like going to places.”

Of course, there was a lot of reading involved. Blakemore delved into the pages of small weekly newspapers from the era, picking up the news and rhythms of daily life. In researching, she didn’t read beyond the period in the novel, but focused on that moment in time. “You need to understand the characters and their context,” she says. “It was their time, not ours. It’s very interesting to see the world through their eyes.

“It’s super fun to read newspapers from back then.”

She came across quirky news such as the skeleton of an eight-foot man found buried under a tree, and a woman shot in the eye by a stray bullet as she stood in the kitchen. “Now, that’s a novel in itself,” she says.

Soon, bits and pieces of research, from newspaper articles to images and random words, began to fill the corkboards lining the walls of her office.

The resulting book launched in March to rave reviews and major sales, joining the popularity of her historical mystery, The Companion (Lake Union), and noted by Publisher’s Weekly as “a captivating tale of psychological suspense.” She is also the author of Bowery Girl and the WILLA Literary Award winner for her young adult novel, Cissy Funk.

Blakemore is the recipient of a Tucson Festival of Books Literary Award, WILLA Literary Award, and three Regional Arts and Culture Council (RACC) grants. Professionally, she is a member of the Historical Novel Society, International Thriller Writers, and Sisters in Crime.

When not working on her own writing, the Pacific Northwest resident is a novel coach, as well as a self-described “history nerd and gothic novel lover.”

For her most recent novel, Blakemore says that she was looking for a stoic main character with a strong New England personality. This character turns out to be Marion Abbott, whose strong personality bridles against the 19th century constrictions in the story.

During the war, Marion had a measure of independence as a nurse for the Union. Her husband was an academic who was killed in battle, leaving her widowed. They have no children. She has no choice but to return home and move in with her brother, Lionel, and sister-in-law, and her young nephew. It’s what might be called an upper middle-class household, with a maid and a handyman to keep the grounds. Nonetheless, the living situation is stifling for an independent woman—and sometimes tense under its polite veneer.

After all, women had few options at the time. They could be nurses, maids, mill girls, or wives. There were just starting to be academic positions for women.

Family looms large in the novel, along with all its obligations. “The connectedness of families was so deeply rooted then,” Blakemore says. “Family also had tremendous responsibility to one another. If you look at Lionel, he had responsibility to everyone in his family.”

One aspect of the novel that touches on family in a major departure from our own time concerns the rituals surrounding death. In those days, the dead were prepared for burial by their own family members, usually at home. They were washed and dressed; like Alice, many were buried in small plots on family land. What we might see today as something rather macabre was simply an act of tenderness and part of the grieving process.

“We’ve lost that intimacy. We’re removed from experiencing that in the same way,” Blakemore says. She notes that it’s still legal in New Hampshire to have a family plot on your property. “At this time period, death was more a part of life. Death was very common: cholera, yellow fever, scarlet fever, typhoid, injuries—and there wasn’t the medical know-how to slow or stop the inevitable. Then, of course, we have the whole Civil War and its terrible loss of life.”

All good ideas have their origin story. Blakemore says the idea for the novel came to her on a flight, when she sat in her economy seat with a pen and notebook, getting down the first few pages of the novel. Later, the hand-written first page went up on her corkboard as a reminder of the energy and excitement of her original idea.

For Blakemore as a writer, it all begins with character. As for her approach to developing story, she labels herself a “plantser”—right in between someone who plots a story and someone who discovers the story as she writes. She calls developing her story a process in which “freedom and anxiety exist right next to each other.”

“I really wanted to tackle family dynamics and loyalty—within a historical thriller, of course. The beginnings of a story come to me in very cinematic images,” she says. “In this case, the image was of a woman in widow’s weeds standing in an asylum’s morgue and identifying the body of a young woman. Her sister. The woman shivered in the cold of the morgue, though outside the air shimmered with heat. So I followed the scene, and the woman, Marion Abbott, through the belly of the asylum and out to the world. I needed to know how her sister died.”

She likes to figure out the last scene as well. Also, she uses James Scott Bell’s process in Your Knockout Novel to help develop rich characters, writing out the answers to his prompts by hand. The writing itself takes place on a computer, in the Scrivener program favored by authors.

Reading also lends inspiration: “Daphne duMaurier for her incredible control of pacing and dread. I know when I pick up one of her books, the tendrils of dread and menace will wrap around me. And her atmosphere! Incredible.”

Blakemore says she spends a lot of time on voice, getting it just right. “Who is the main character and what is her voice?” To help her get that character’s voice to resonate like Marion Abbott’s, Blakemore often draws on her background in theater.

Eventually, once she has a draft, she pulls at loose threads to weave a richer story. “Later on, I’ll think, oh, I did this thing way back there—I’m going to use it now. My approach leaves it very free if another character comes in who you didn’t expect.”

Although she has a home office, she actually wrote most of AFTER ALICE FELL at the local library, arriving not long after the doors opened and working into the afternoon. “That was my office,” she says.

She is already exploring ideas and characters for her next novel, The Maid of Sorrow and Light, a thriller about faith, fraud, mediums, and murder. One thing’s for sure: Her fans can expect yet more intriguing history in the future.

Kim writes historical novels that feature fierce and often dangerous women. She writes about the thieves and servants, murderesses and soiled doves, grifters and dancehall girls – the women with darker stories, tangled lies and hidden motives.

Her adult debut in historical mystery, The Companion (Lake Union) was lauded by Publisher’s Weekly as “a captivating tale of psychological suspense.” She is also the author of Bowery Girl and the WILLA Literary Award winner for her YA novel Cissy Funk. Her novel AFTER ALICE FELL will be released by Lake Union in March 2021.

Recipient of a Tucson Festival of Books Literary Award, WILLA Literary Award, and three Regional Arts and Culture Council (RACC) grants, she is a member of Historical Novel Society, International Thriller Writers, and Sisters in Crime.

Outside of writing, she is a novel coach (www.novelitics.com), a history nerd, and a gothic novel lover. She lives with her family in the Pacific Northwest and loves the rain. Truly.