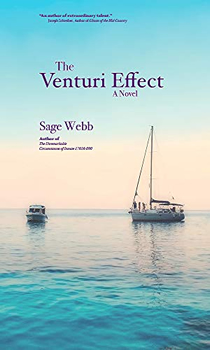 You might not expect boats, beaches, and bars to be the ingredients for a gripping legal thriller, but THE VENTURI EFFECT by Sage Webb will surely change your mind.

The book opens with Devlin Winters trying to escape the pressure of a partnership at a big criminal defense firm in Chicago. After a total professional breakdown, Winters is flirting with alcoholism and hiding from herself by working on a tourist boardwalk and doing very little on her dilapidated old boat on Galveston Bay. But then a boyfriend from the past turns up with a mysterious little boy and an indictment on his head. Suddenly, Devlin is back in legal action. Though she’s not really a heroine, and she definitely wouldn’t think of herself that way.

“She’s a reluctant protagonist,” Webb says. “She’s smart and doesn’t back down from a fight, but she will avoid a fight as much as she can. Once the fight is inevitable, she’s all in. She’s also conflicted. She wanted a life that included more love than she got from her wealthy, distant, unemotional parents. While she claims to dislike kids, she secretly wanted to marry the sweetheart of her youth and live a simple, family-oriented life. Instead, she ends up hyper-competitive, pursuing a demanding legal career that leaves her no time for relationships. Ultimately, under the pressures of work, she crashes and slinks away from her legal partnership and into a bottle.”

Devlin’s challenge is that her old flame, the proverbial “one who got away,” has a brother who is less than honest in business. This brother ends up getting indicted federally for a complex fraud scheme that involves offshore shell corporations and some not-above-board tax dealings. Devlin is not at all confident about handling the case.

“Part of the story is Devlin pulling herself back together,” Webb says. “Her professional crash and burn that sends her out of Chicago and down to Texas leaves her confidence severely shaken, so as she faces the legal challenges of the story, she feels insecure.”

But the government goes after Devlin’s love interest, alleging that he was involved with his brother’s shady dealings. So Devlin ends up having to represent him, which involves trying to untangle a web of business fraud that stretches across the ocean. Devlin soon finds herself on a sailboat bound for St. Kitts in a race for exculpatory evidence. Why does the setting matter?

“St. Kitts is important because of the financial landscape there and the issues of extradition with the US,” Webb says. “Fraud offenders often turn to the islands in seeking to cover their tracks. It also matters because of issues of international kidnapping and Hague Convention treaty provisions. There’s a fight over a nine-year-old who gets caught up in his dad’s wrongdoing and ends up a pawn for the adults.”

While Webb has more than a decade of experience in criminal defense, this case is not based on a personal experience. But these sorts of schemes do occur, and she has worked on many large-scale fraud cases.

“The personal entanglements would raise a lot of ethical issues,” Webb says, “so there’s a bit of poetic license with the human drama. The sailing and boat stuff and moving to Texas do spring from my personal experiences, though I’ve not sailed to St. Kitts! I moved to Texas from Michigan, and I’ve lived on a couple boats in the Galveston Bay area since that move. My husband and I bought an old mahogany trawler and fixed her up, so Devlin’s boat is based on her.”

Webb says that boats make great homes for people looking to “drop out” and leave some of the worries of mainstream society behind.

In Webb’s personal experience, “Marinas tend to sit in beautiful locations, and the pace of boat life is just slower. People who live on boats simply don’t stress as much. I can’t explain the phenomenon fully, but something happens when people move aboard: they want and need less, and the world slows down significantly.”

Ultimately, this case dumps Devlin at counsel table for a federal fraud trial in Michigan, staring down her demons in the courtroom in a face-off with an obsessed prosecutor who has a secret of his own. And Webb knows how to make a courtroom scene as exciting as sailing. Of course she finds courtroom drama pretty interesting, and can understand court watchers who show up at public proceedings just to take in the action.

“In terms of crafting the drama on the page,” Webb says, “I want authenticity and excitement. So while most readers aren’t going to care much about statutory citations and the like, I enjoy including that kind of thing to add to the atmosphere. And by delving into the procedures and the stakes, I think I can expose some of the true drama of federal proceedings. Given the federal sentencing guidelines, and the lengthy punishment defendants face, everyone who ends up a federal defendant has a lot to lose. I just try to put those stakes on the table. I also try to put the reader into the heart of the fight, with the split-second decision making and the way things develop so quickly and how fortunes shift in an instant.”

And the author assures us that this exciting legal drama is only the beginning of this lawyer’s journey.

As Webb explains, “Devlin, and pretty much the rest of the cast, are coming back next year in The Cult of Mammon, which will take readers to Hawaii and California into a new nest of fraud, and into an interesting twist of Civil War history. “

Readers have the chance to get in on the start of the adventure right here, riding the waves and walking the courtrooms in THE VENTURI EFFECT.

Sage Webb practiced criminal defense for over a decade before turning to fiction. She is the author of two novels and the recipient of numerous literary awards in the US and UK, including second place in the Hackney Literary Awards. Her short stories have appeared in Texas anthologies and literary reviews. In 2020, Michigan’s Mackinac State Historic Parks named her an artist in residence. She belongs to International Thriller Writers and PEN America, and lives with her husband, a ship’s cat, and a boat dog on a sailboat in Galveston Bay.