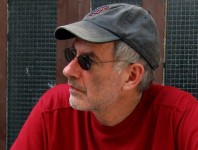 Helsinki Homicide: Nothing But The Truth by Jarkko Sipila

Where The Shadows Lie by Michael Ridpath