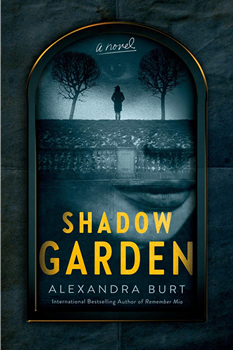 In the first pages of Alexandra Burt’s SHADOW GARDEN, Donna Pryor, the wife of a wealthy surgeon, is installed by her husband at a luxurious estate to recover from an accident that has left her hip shattered and her memory addled. Donna, who assumes her husband is leaving her, thinks her stay at the posh facility is her “consolation prize,” but she doesn’t understand why he has abandoned her—or why the couple’s troubled adult daughter won’t call or visit. Over the course of the novel, the truth of Donna’s predicament is revealed to be something far darker than a collapsed marriage.

With her two previous novels—2015’s Remember Mia and 2017’s The Good Daughter—Burt earned critical acclaim and a loyal readership for her evocative prose and intricate plotting. In SHADOW GARDEN, Burt revisits themes that will be familiar to her fans—fractured memories, splintered families, devastating secrets—and cements her reputation as an exciting new voice in psychological suspense.

Burt spent some time with The Big Thrill to discuss her latest release, which seamlessly blends domestic suspense with the gothic tradition that inspired it.

Tell me a little about the inspiration for SHADOW GARDEN.

The novel begins with Donna Pryor living at Shadow Garden, a luxury estate at the end of a winding road. Donna is wealthy and she has everything but the truth of what happened to her perfect family. Her fall from grace is not something she can fathom, and she’s determined to find out why her family won’t return her phone calls. She sets out on a truth-finding mission, and the reader will go on that journey with her and get to the bottom of it.

Domestic suspense and gothic fiction have rich histories of unforgettable settings, such as Manderley in Rebecca and the Brampton in Rosemary’s Baby. Your novel has two: the titular estate and the Pryor family’s sprawling manor, Hawthorne Court. Can you tell me a bit about crafting those settings?

I’ve been obsessed with houses for as long as I can remember. Houses are paramount in domestic suspense. It’s where it all happens, behind those walls, where terror hits close to home.

If my novels were houses, Remember Mia is a brownstone in New York City; sturdy, thickly bricked, but no one inside is safe. The Good Daughter is an old farmhouse lying in wait, ready to let go of its secrets. SHADOW GARDEN appears “through the thicket of trees,” with “faint amber lights,” and you almost miss it if you don’t pay close attention, kind of like memories.

In my imagination, SHADOW GARDEN had a Victorian feel to it, an almost Gothic setting though contemporary, while Hawthorne Court is an intricate and stone-heavy Tudor which Donna Pryor manipulated by building additions and basements and extra floors. “Having gained distance from my former life, I now understand what I tried to do here: it was my way of clearing the trees and preparing a plat, building dams and levees around it to keep predators at bay.” Both settings are characters; they breathe and judge and hold their inhabitants hostage. Creating those estates allowed me to engage with the characters and be in their heads. The settings developed from there, organically.

Besides exploring Donna’s troubled relationship with her home, how else does SHADOW GARDEN fit into the Gothic tradition?

SHADOW GARDEN cultivates a feeling of being haunted by what has been left unsaid, what’s lurking in the dark corners of the characters’ memory and therefore owes a debt to the elements of Gothic literature. According to Ann B. Tracy (The Gothic Novel 1790-1830: Plot Summaries and Index Motifs), “The world of Gothic fiction is characterized by a chronic sense of apprehension and the premonition of impending but unidentified disaster. The Gothic world is the fallen world, the vision of fallen man, living in fear and alienation, haunted by images of his mythic expulsion, by its repercussions, and by an awareness of his unavoidable wretchedness.”

There are no castles or foggy landscapes, but there are hauntings, though not in a classical sense—characters are haunted by the past, by wrong decisions and inner torments. SHADOW GARDEN removes the reader from their ordinary and everyday world and places them in contemporary dwellings reminiscent of Gothic literature; a world of isolation, of feeling trapped, circumstances beyond the characters’ control, and a woman threatened. It’s Gothic with a contemporary twist.

Some reviewers and blurbers are calling SHADOW GARDEN “domestic horror” rather than “domestic suspense.” What are your thoughts on that, and how do you define the line between suspense and horror?

SHADOW GARDEN emphasizes tension and suspense as opposed to an abundance of disturbing scenes which would classify it as horror. The main focus of SHADOW GARDEN is suspense rooted in a reality as the reader understands it. The reader of a horror novel wants to be scared, and that part is usually predictable while suspense is thrilling because it’s unpredictable and catches the reader off guard. I can see SHADOW GARDEN having a touch of “horrific” that makes the categorization plausible and very true.

What’s your writing process like? Does it look different now than it did a few months ago?

The process depends very much on deadlines. I’ve done everything from not writing at all to revising 12 hours a day. I roll with the punches and try my best, but it’s definitely harder than it used to be. I’m all over the place right now, and that’s the pandemic speaking, but I try to be disciplined and dedicate a couple of hours a day to writing. With SHADOW GARDEN being out in the world, I feel like a free agent in many ways. I’m excited about what my next obsession will bring and where it will take me. I have two novels brewing in my head and a true crime podcast called The Dark Beat I’m working on.

The pandemic has me wandering a bit. I am working on two novels simultaneously and a podcast which examines authors touched by true crime. The novels are in their infant stages and haven’t completely taken form yet, but I see myself turning toward the horror genre. It feels like a very organic direction that I ought to be taking and I’m looking forward to the challenge.

Alexandra Burt was born in a baroque German town in the East Hesse Highlands. She moved to Texas, married, and worked as a freelance translator. Determined to acknowledge the voice in the back of her head prompting her to break into literary translations, the union never panned out. She decided to tell her own stories.

She currently resides in Central Texas. She is a member of Sisters In Crime, a nationwide network of women crime writers.

Remember Mia is her first novel. Her second novel, The Good Daughter, was published in February 2017. Her third novel, SHADOW GARDEN, is forthcoming in July 2020. She is working on her fourth novel.