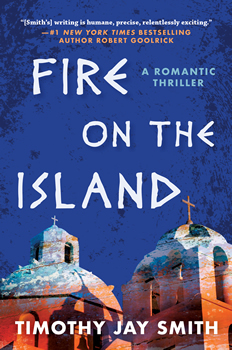 As anybody who’s gone through or is going through the 2020 lockdown will know, finding ways to escape the tedium can be a challenge. Timothy Jay Smith’s FIRE ON THE ISLAND, a romantic thriller set on a Greek island, is guaranteed to transport the reader away.

Nick Damigos, a gay Greek-American FBI agent, is working undercover in the picturesque fishing port of Vourvoulos. Nick’s investigation centers on a series of mysterious fires set by an unknown arsonist, and it’s an absorbing, satisfying mystery that also doesn’t flinch from addressing the complexity of the international refugee crisis that has literally washed up on Greece’s shores.

The setting of the island is glorious, and one Smith knows well. His first job after college saw him in Greece, where he spent two years working for a Greek sociological research institute. It was the start of his love affair with that country. “For the last 15 years, every spring my partner and I have visited Molyvos, a charming village on the island of Lesvos, which is the setting and inspiration for FIRE ON THE ISLAND. But there are so many charming villages in Greece.”

Yet into the fictional picture-postcard resort, we have the heartbreaking arrival of refugees coming by boat, with many losing their lives in the process. It’s a humanitarian crisis that Smith has witnessed firsthand. “I’ve been involved with Greece’s refugee crisis since it began,” he says. “Especially during its peak in 2015-2017. In one 12-month period, an estimated 500,000 refugees landed on the coast just adjacent to our village. They didn’t flood the village but bypassed it as they made their way to the island’s capital to register and get permission to travel onward.”

Smith’s closest friend in the village coordinated efforts to aid them, with Smith and many others pitching in in any way they could. “We helped refugees off rafts, transported them to the capital, handed out food and other necessities. I used my international development network to solicit donations, and eventually managed to buy, among other things, 16,000 caps, 8,000 rain ponchos, hundreds of pairs of sweatpants and shoes, two portable toilets, literally tons of food, and kitchen equipment for one of the camps.

“Sadly, not everybody had the same view of the desperate arrivals, an attitude which found its way into the novel. The refugees created a real rift in the village, which continues to this day. In FIRE ON THE ISLAND, the village-wide meeting that takes place in the church is pretty much exactly how the first town hall meeting went, including the matriarch screaming that the refugees should be shot before making it ashore.”

The novel’s mystery—that there is an arsonist on the loose that Nick Damigos has to stop to prevent catastrophe—is an intriguing one.

Smith, who has a long-standing interest in issues of social justice and equity, explains that this is the starting point for his writing, and then the mystery follows. “When I start a new piece of work, I first ask myself what’s the issue I want to write about, and then I craft a suspenseful plot to illuminate that issue without it being heavily message-laden.

“When I started FIRE ON THE ISLAND, Greece was in the throes of a major financial crisis, and the influx of refugees was clearly becoming a catastrophe. I didn’t want to write about either event directly. Instead, I wanted the book to be about how ordinary Greeks were coping with the dual crises, and in the process, write an homage to Greece and the Greek people for contributing so much to my life. There was a real arsonist on the island setting small bush fires, and I created the mystery—and threat to the village—out of that snippet of information.”

Speaking of snippets of information, one of the characters has a fondness for hand gel/sanitizer that seems positively prophetic. “The whole thing about hand sanitizer—which I call Sporell—started as a spoof on people whom I deemed had gone a bit overboard on using it in general. A few years ago, I was next to a table of eight women who met up for lunch, and as they arrived, each one pulled out her little bottle of gel. What could they have been so worried about? Fast forward to a pandemic, and now I don’t leave home without it.”

Home for Smith has been in many corners of the globe, but it has been France for the last 15 years. “I want to live someplace charming, so that even tedious errands, like going to the grocery or pharmacy, are pleasant experiences. I don’t want to rely on a car, which is good since I don’t own one. I want to be reminded of nature’s beauty every day. I don’t want to ever feel unsafe on the street, or worry that, if I tell someone to bugger off, he or she might pull out a gun and shoot me. I also want to feel confident that I’m safe to live openly as a gay man.”

The time spent with FBI agent Nick Damigos was hugely enjoyable, but Smith is not planning another mystery for him to solve.

“Alas, no more Nick Damigos. I’ve had that question asked after each novel has been published, so I must be doing something right! People seem to want more. With Zoom, I could have a reunion of characters, but I can’t imagine that happening in a new novel. I write standalone novels. I like the challenge of creating all-new characters and settings.”

Smith looked at a number of options when planning what to take on next.

Then he looked to Greece’s refugee situation again. “I knew that FIRE ON THE ISLAND was not the last I’d write about it. I realized that I knew everything that happened to refugees once they got off their rafts in Greece, but I didn’t know how they got onto the rafts in Turkey. So I went to Istanbul, which I already knew somewhat, to learn that side of the story, and came back with an incredible tale.

“It already has a name,” Smith says. “The Syrian Pietà, the story of a young gay Syrian refugee trying to survive in Istanbul. It’s a beautiful and definitely suspenseful story.”

ITW Awards: Another Look at the Nominees