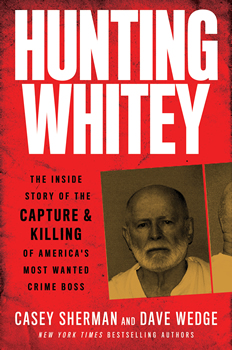 Even if you’re not steeped in the world of true crime, the name James Joseph “Whitey” Bulger Jr. is bound to tweak some familiarity—countless movies, books, and magazine articles have been written about the infamous 1950s crime boss and FBI informant who led the Winter Hill Gang just outside of Boston.

Whitey—nicknamed by his father for his shock-white hair—was eventually tried on 32 counts of racketeering, money laundering, extortion, and weapons charges, not to mention his complicity in 19 murders, and received two consecutive life sentences for his crimes.

But long before this, Whitey spent 16 years on the lam, evading the FBI despite being added to their Ten Most Wanted Fugitives list in 1999, second only to Osama bin Laden. Not much has been written about Whitey’s years as a fugitive—at least, not until now.

In this The Big Thrill interview, acclaimed authors Casey Sherman and Dave Wedge talk about how their just-released book, HUNTING WHITEY, taps into new information about the infamous gangster and why readers are chomping at the bit to get their hands on it.

Whitey Bulger is one of the most written-about gangsters—countless movies have been inspired by him, and numerous books and magazine articles have been published. What drew you to his story and inspired you enough to want to write this book?

We covered Whitey’s criminal career and then his flight from justice as journalists. There’s been some great reportage on Bulger’s life of crime, but no journalist has been able to tap into the 16 years he spent as a fugitive, his years in prison where he was nearly killed in an attempt on his life, and ultimately his jail cell murder. Our goal was to shed light on these years and through 70 letters written by Bulger himself, more than 30 interviews with those connected most closely to the case, and correspondence with Whitey’s suspected killer, we were able to write an entirely new and fresh book on Whitey Bulger.

Admittedly, many of those aforementioned books and movies had less of a focus on Whitey’s capture and his time in prison before he was killed— what questions were you hoping to answer for yourselves, and also for readers?

We wanted to examine Whitey in the “lion in winter” phase of his life and how the aging gangster managed to evade investigators for more than a decade. We were able to explore this topic through Bulger’s letters (one that even describes his own capture) and through interviews with FBI agents who ran different legs of the race to hunt down Whitey, and we saw how their strategy evolved over time.

The research in HUNTING WHITEY is astounding. What can you share about your research and writing process as a team? And what was the single most shocking piece of information you uncovered while doing the research? What tidbits would you “tease” to convince readers they need to read another Whitey book?

As a team, we divide and conquer. Sherman embedded himself with the FBI and while gaining unprecedented access to the manhunt for Bulger he built a relationship with Whitey’s prison art teacher that culminated in most of the letters written by Whitey and also the last known photos of Bulger alive which are featured in the book. Wedge got Whitey’s brother Billy Bulger to break his silence for the first time in years. He also interviewed the team that prosecuted Whitey and the daughter of Freddy Geas, the inmate suspected in Whitey’s murder. This led to a first of its kind correspondence with the accused killer. We felt like we were shocked on a daily basis with all of the new information we uncovered. But one of the most surprising stories we learned was that Whitey had been willing to gamble with his own freedom by attending a screening of The Departed (a fictionalized version of his life) at a crowded movie theater. What he didn’t know at first was that a police officer with Massachusetts roots was seated just four rows behind him.

Wow! Those are some incredible “gets.” Why do you think those pieces came together for you?

It’s a combination of hard work and luck. We’ve built reputations as insightful, fair journalists, and all those who provided key information for this book knew that we would write the story the right way, as it really happened.

The number of books and movies featuring Whitey is a testament to society’s continued interest in gangsters—and really, in true crime in general. Why do you think fascination around notorious criminals—and in particular, Whitey Bulger—continues?

Whitey Bulger has become as notorious as Al Capone. We think that readers have a macabre fascination with violence and crime because there’s a bit of Bulger in all of us. We just don’t act on it. The fact that he entered a criminal partnership with the FBI and informed on his rivals for decades shows how manipulative and cunning Whitey was.

This is not the first project for the two of you—your previous books have seen some film success. Anything on that front to share with respect to HUNTING WHITEY?

We’ve been fortunate to have our work adapted by Hollywood in the past. Sherman wrote The Finest Hours, which became the 2016 Disney movie starring Chris Pine and Casey Affleck, and Sherman and Wedge together wrote Boston Strong, which was adapted into the Mark Wahlberg film Patriots Day. We are working with Double Nickel Entertainment and Sky Studios to produce a limited series based on HUNTING WHITEY.

What can you tell us about what you are working on next?

We’ve partnered with the world’s #1 bestselling author James Patterson for a nonfiction true crime book titled The Last Days of John Lennon. The book is scheduled for release in December to commemorate the 40th anniversary of the Beatles legend’s assassination.