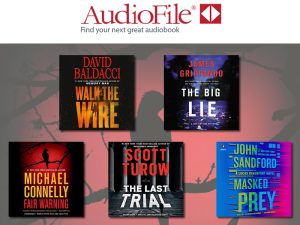 Whether you’re already a fan of the fabulous Scott Brick or you’re just discovering his audiobook performances, I hope you find some new titles to add to your wish list. Before you hit that play button, take a moment to read the following interview with AudioFile Magazine about his life in and out of the recording booth.

I’m passionate about baking. Seriously, I’m nuts, and pretty ambitious at what I attempt. I’ve actually been offered a job as a professional pastry chef twice and even had someone offer to fund me if I wanted to start my own business. But I quickly found out it wasn’t as much fun when I had to do it on a really tight schedule, plus it would’ve kept me out of the studio. I kept my amateur status instead. But my TV is constantly set to baking competitions—they’re always on when I’m in the kitchen or unwinding after a long day in the studio. My grandmother said gardening every day relaxed her. I think baking is my version of that.

Reading biographies of film stars and books about the golden age of Hollywood. I’m especially fascinated by the silent era. In the last week I’ve finished bios of Roscoe Arbuckle, Douglas Fairbanks, and even Florence Lawrence, who sadly no one remembers anymore but was the very first performer who ever had her name listed in the credits of a film. Actors had always been anonymous up to that point, so she’s referred to as the World’s First Movie Star. I was stunned to learn she lived only a half block from my house! There’s just something about that era that fascinates me to no end. It’s actually inspired me to possibly do some of these books on audio. They may sell only a dozen copies, but they would be so much fun to work on!

I’m starting my dream project three weeks from now; we’re recording Round up the Usual Suspects: The Making of Casablanca, the greatest movie of all time. I tracked down the author. She’s 90 years old and living not far from me, so we’re hoping to get her into the studio to talk about it and include the interview at the end of the book. Projects like that one are what Heaven looks like to me.

What’s the first task you tackle when given a new audiobook project?

Typically, the first thing I do is send the manuscript to my researcher, who goes through it and finds every word that I could conceivably stumble over, especially words or phrases from foreign languages that I’ll have to read convincingly. Once the book is back in my hands, if it’s fiction, then the first thing I do is something I never do when I read for pleasure, and that’s read the ending first. The reason for this is so I can see the arc of the main character: What are they like at the beginning of the book, and what will they be like by the end? That’s the arc I’m going to have to convey, and it helps me to map it out in my head as I’m going.

Many people think the word “protagonist” means the lead character, but it actually means the character who changes. Does the character begin as someone who’s somewhat intolerant, perhaps? Prejudiced against a particular race, or gender, or persuasion? Well, if the point of the story is that they see the error of their ways at the end, then I need to know that ahead of time so that every single time that character comes in contact with someone from the group he’s intolerant toward I can raise the stakes just a little bit. I can look for ways to illustrate that change subtly as the story progresses, so it doesn’t come as a huge surprise. Really great authors aren’t afraid to change the status quo, even in ongoing series, and it’s my job to portray those changes as effectively as I can. That’s why I’m going back and reading Lee Child’s Jack Reacher books from the beginning, in chronological order rather than publishing order, because I’m able to see the changes in him that took place in the books before I was working on the series, and it makes the character as he currently is even more lifelike. Well, I’m also doing it because they’re absolutely amazing, but that’s beside the point.

Good authors always foreshadow, but they put it in for a specific reason, so my challenge is to not get caught doing it. The author wants the listener to think their red herring character is the killer, so it’ll make it even more shocking when it turns out to be the one who seemed entirely innocent. My job is to make that red herring character as unlikable as I can—again, without getting caught—and to simultaneously make the real villain as nice and friendly as possible. And sometimes you’re stuck, because the killer will speak to his henchmen on the phone, but because the listener doesn’t know who’s speaking, I can’t use the Irish or German or Russian accent I’d typically use if that’s where the killer is from. But that character may show up throughout the book, and if he’s described as having an accent, I have to use one in those sections. Which means that, until that character is revealed as the villain, I have to perform them inconsistently, without an accent, which is going to be jarring for the listener. Damned if you do and damned if you don’t. In the end, I have to prioritize the element of surprise that the author’s worked so carefully to create over making things easier for the listener by being consistent.

What genre will you always agree to do and why?

Science fiction, forever and always, because I’ve been reading it voraciously since I was a kid. Plus, I learn a great deal while working in the genre, as some of these characters and situations are hugely challenging. My favorite author, Stephen R. Donaldson, introduced an alien race that was described as having voices that sounded like the slow accumulation of rust. Seriously? But you have to figure out how to make it work.

The biggest challenge of my career was a sequence in Something More Than Night by Ian Tregillis. At one point, a character splits in two and does two things simultaneously, and okay, fine, all good, but the text split, too: vertically, down the center of the page, written so you can read both side by side. But on audio? That’s not going to happen. That was a head scratcher, but it felt great when I figured it out, and I love being challenged like that. We don’t get better without being tested in some way, right?

Thanks so much for taking the time to talk with us. Here’s hoping you don’t run out of flour in the weeks to come—baking truly is a great way to relax. 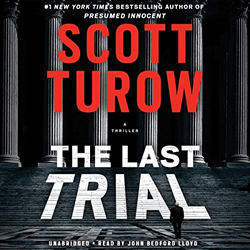 Narrator John Bedford Lloyd previously portrayed attorney Alejandro “Sandy” Stern in Scott Turow’s Burden of Proof. This time around, the brilliant defense lawyer is about to defend his last client. Lloyd adds a weariness and a touch of confusion to Stern’s voice as he struggles to defend the 75-year-old doctor who saved his life with a controversial cancer drug. Filled with bittersweet reflections on aging and family, this audiobook still manages to pull the rug out from under the listener once again. 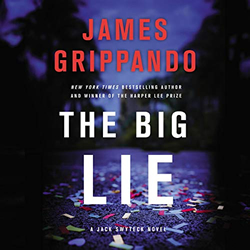 This audiobook is a thriller for those who enjoy fiction that merges with today’s political realities. Adeptly narrated by Jonathan Davis, the story features a Trump-like president whose reelection is jeopardized by a rebellious member of the Electoral College and her politically connected lawyer, Jack Swyteck, the featured character in Grippando’s series. Davis’s portrayals of the bumbling president and his election opponent are so strong and memorable that listeners will savor every moment of dialogue. 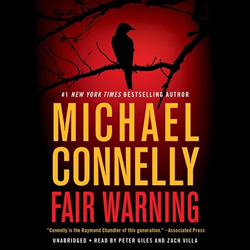 After a long break in this series, narrator Peter Giles returns to portray Michael Connelly’s investigative reporter, Jack McEvoy. Giles is joined by Zach Villa, who provides the calm, creepy voice of the serial killer, The Shrike. This is a fast-paced and engaging listen. 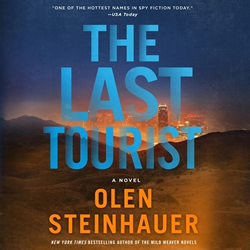 David Pittu’s narration sounds so conversational—even conspiratorial—that it feels as though he’s speaking directly to listeners. Milo Weaver, a one-time CIA agent, is approached about a group of agents he once brought together and thought he had disbanded. Now it appears they are still out there. The action takes place around the globe, and Pittu juggles an impressive range of characters and accents. Listeners will admire his skill as he creates an unsettling, immersive experience. 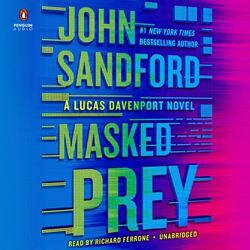 Narrator Richard Ferrone returns to give listeners the 30th book in Sandford’s Prey series. Ferrone’s deep, gravelly voice has matured along with lead character Lucas Davenport, who is called upon to investigate a web of extreme right-wing groups. Listeners are drawn down many false paths before Davenport gets one step ahead of the FBI and the killer. 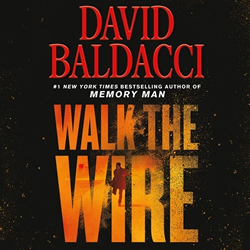 Narrating duo Kyf Brewer and Orlagh Cassidy deliver Amos Decker’s sixth adventure. Decker, a former FBI agent turned consultant, who has perfect recall, and his lovely partner, Alex Jamison, investigate the murder of Irene Cramer, whose body is discovered mutilated and autopsied on deserted hunting grounds in North Dakota. Brewer’s and Cassidy’s characters interact with one another seamlessly as the stress of the case grows.