Firing on All Cylinders 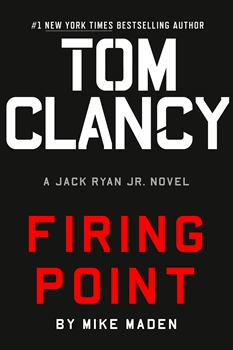 The 29th book in the Jack Ryan universe starts with a bang. Literally. Jack Ryan Jr. takes some time off from The Campus to explore the history and culture of Barcelona. On his last evening, he runs into an old friend from college, Renee Moore, in a small café. As they part ways, the lingering possibility their relationship may rekindle ends abruptly with an explosion that kills Moore, along with many others. Ryan decides to extend his trip until he catches the people responsible. In the meantime, President Ryan deals with the mysterious sinking of vessels in the south Pacific that may escalate to a worldwide threat.

To come up with new techno-thriller novel plots that are simultaneously treacherous, interesting, and original, is a challenge in itself. The world is full of threats but it’s the ones no one thinks about that do the most damage.

“It’s no accident that all of the conflicts we’ve been engaged in since World War II all occurred on the periphery—places and people we knew little if anything about,” says Mike Maden, who has written four novels in the Tom Clancy universe, including the latest, FIRING POINT. “We’re also in a new technological age where machine capabilities are fast outpacing our capacity to anticipate, let alone contain them. My job is to think about the less obvious threats—human and technological—and bring them to light.”

Any fan of Tom Clancy expects the technical bits to be both accurate and particularly detailed, which is a challenge to the authors who carry on the torch.

“I spend a lot of time on research and take endless notes. But at least I’ve got Uncle Google to help me out. What astounds me is that Tom Clancy only had the public library and the card catalog when he was starting out, but he was finding things that even so-called ‘experts’ didn’t know. How did he do it? The man was brilliant,” Maden says. “Weapons systems are the things that Clancy readers want properly rendered. The challenge is getting accurate information—and of course, it isn’t possible to access classified specs. You’d be surprised how often technical specs vary between sources, and of course, within systems themselves. And, yes, I even sweat whiskey vs. whisky because Clancy readers also care about details like that—and rightly so.”

Another trait of the Tom Clancy series is that the attention to detail is extended not only to the guns and crafts, but also to the characters that populate the series, no matter how small the role they play in any particular plot. According to Maden, nothing grabs him more than a great character.

“I’m very meticulous in my construction of characters because from my perspective a plot is simply the outcomes of choices that all of the characters make,” Maden says. “I’m also very intentional about all of my characters, including the minor ones who in their own minds are the heroes of their own little stories, right? So I treat each minor character as heroically as I can, even if their piece of the novel is small. If they’re important enough to play a role in the story then they deserve some thoughtful backstory—and yes, it’s fun. Sometimes those minor characters are the ones that stick with you long after the story is over.”

Maden admits that after having written a few books into the series, he still likes all of the original characters created by Clancy, and it’s hard to pick a favorite.

“But if forced to choose,” he says, “I’d go with John Clark. Like so many facets of the Clancy universe, he’s the original operator who sets the mold for all other fictional operators to follow in the genre. We love President Ryan because he’s a genuinely good guy who always tries to do the right thing for the American people—but he’s not an action figure. It’s John Clark who shows up with bullet and blade to take care of business when it counts.”

And while on the subject of characters, Maden is thankful for the leeway he’s given when writing his series installments—especially with Jack Jr., who has changed over time. In fact, some of his readers think Maden kills too many of the good characters he’s introduced.

In the time of social media and access to information, one would think the world would recognize the president’s son walking on the street. Keeping Jack out of the public eye is one of the few series conventions that must be observed.

“And that makes sense, doesn’t it?” Maden says. “If Jack Jr. is recognized everywhere he goes then he can’t do any undercover work. Let’s talk about some reasonable explanations of how he might achieve and maintain his anonymity. First, Jack Jr. doesn’t seek the spotlight, nor is he a very public and political person, like Chelsea Clinton for example. Second, as discussed in FIRING POINT, there are active government and private programs to scrub content from social media for people like undercover agents. Open Source Intelligence (OSINT), like Facebook, is a huge source of intel for all intelligence agencies and it’s the first place an enemy government or organization will look for information on a suspected spy or operative. Third, even if you think you remember what Amy Carter looks like, are you sure you’d be able to positively identify her if she were wearing sunglasses or dyed her hair or changed her posture and gait? Jack Jr. changes his hair style, grows and removes facial hair, etc.”

Maden isn’t the only writer carrying on Clancy’s legacy. Last year The Big Thrill covered Marc Cameron, who wrote the Jack Ryan novel Oath of Office, and although the styles are different, Maden and Cameron still make it a cohesive series.

“Marc Cameron and I are completely independent,” Maden says. “But we touch base with each other so we don’t accidentally cross our wires on things like the names of foreign presidents and whatnot. The series editor, Tom Colgan, provides overwatch to make sure the storylines are complementary (or at least not contradictory). I can’t say it enough: it is a real joy and pleasure working in this series because we are given so much creative freedom.”

The series carries on, and new blood is on the horizon as a new author has been invited to write novels in the Ryan universe.

“I think Don Bentley is a brilliant choice for the Jack Jr. series. He’s an amazingly gifted writer who possesses the rarest of gifts: a unique voice,” Maden says. “It’s my honor to pass the baton on to him and I can’t wait to read his first Jack Ryan Jr. novel.”

As a successful author, Maden is often approached by aspiring writers, and the most common question is about the secret to a writing career. His answer is a simple one: derriere in chair.

“There is no substitute for the long, hard grind of writing every day,” he says. “Yes, I love it and I’ve never been happier, but I work really hard on each novel and each one is harder than the last because I want it to be better than the last. I can’t control the outcome (sales, reviews, etc.) but I can start the novel and I can finish it and this is completely within my power. If you think you’re a writer stop thinking about it—and write!”