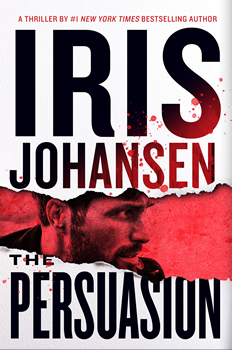 In THE PERSUASION—bestselling author Iris Johansen’s 26th book in her Eve Duncan “forensic sculptor” series—Eve’s daughter, Jane MacGuire, is the target of a dangerous sociopath who’s determined to have her for himself, and use her to lure her longtime love interest, Seth Caleb, into a murderous plot to gain unlimited wealth.

While working on a project to sketch an archeological dig for artifacts in Wales, Jane agrees to care for her 10-year-old brother, Michael. She soon learns that she’s the target of a madman’s plot to take her for himself and lure Seth into a trap.

Seth has paranormal abilities: the blood talent, which allows him to manipulate a person’s blood flow—to cause both harm and ecstatic pleasure—as well as persuasion, his ability to alter one’s emotions and perceptions. But Jane discovers that Seth isn’t the only one with psychic abilities—her brother Michael can feel and see things others can’t, and she herself has dreams that compel her to draw images that connect her to danger.

As a murderer who’s been stalking Jane for years draws her and Seth into his violent plan, Jane learns to trust Seth’s abilities and intentions—it’s the only way to prevent the death of innocent victims, including Michael. And when Seth becomes a target, she realizes her love for him is stronger than her fear of his abilities. Jane finally learns to trust the Hunter. But they must use that trust to defeat a madman determined to see them die.

Fans of Jane and Seth will get what they’ve been waiting for—the culmination of their sexual tension and obsessions when they acknowledge they can’t live without each other and commit to a life together. But they must first defeat the enemy who tries to tear them apart.

The Big Thrill caught up with Johansen about her inspiration for THE PERSUASION, her Eve Duncan series, and her writing career.

What inspired you to give Seth Caleb the abilities of the blood talent and the Persuasion? Do you believe there are people who possess such abilities or are they solely the products of your imagination?

I gave Seth those powers because the possibilities intrigued me, and I could see all kinds of emotional and storytelling opportunities. No, they don’t exist and are my own creation, but they do fascinate me.

Tell us more about Jane’s decision to finally trust Seth and his abilities, but on her terms.

Seth is human and sometimes heroic. He has the power of manipulation if he wishes to exert it, but he uses it only when absolutely necessary. Is he tempted? Yes, because he’s human. Jane would not tolerate even the semblance of manipulation without total trust.

What inspired the character of Eve Duncan and her gift of forensic sculpting?

Actually, her profession is what intrigued me into developing the character of Eve Duncan. I saw a documentary about forensic sculpting on television, and I was fascinated. As a writer, I wondered what if…?  Then I built a background and character who would have an emotional reason to become a forensic sculptor.

It took a long time, but Eve has at last come to terms with the murder of her daughter Bonnie—she feels Bonnie is always with her. But the tragedy has given her an obsession to bring home other lost children when she reconstructs a skull. She hasn’t used it to empower; it’s a natural outcome of what happened to her and the attitude that inevitably followed.

With over 56 titles so far, how in the holy hell do you write so many books?

I was always an avid reader, and that translated to a wish to write my own stories. There has always been a tale I wanted to tell, and I just sat down at the computer and told it. There are so many wonderful stories waiting to be written and great characters for me to get to know. I’m something of a workaholic, but if it brings me pleasure, why not?

You didn’t start your writing career until after your kids went to college. Do you have advice for other writers starting their careers later in life?

I started writing for my own pleasure. I never thought it might become a career until everyone yelled at me to take the manuscripts off the shelf in the closet and send them to a publisher.  That’s what I did, and the publisher took all of them. I hyperventilated but decided that maybe this was the way I should go.

I suppose the advice I’d give to any writer, no matter when in life they start out, is to not write what’s popular but to tell the story they want to tell. Once started, finish what you write even if you become discouraged. You learn with every book, and you can always rewrite.

Tell us more about writing with your son, Roy.

Roy has always been a power unto himself. He started writing when he was in high school. By the time he graduated from college, he’d won first place for a screenplay in a contest sponsored by Steven Spielberg and Martin Scorsese that was made into a thriller with Pierce Brosnan. It won an Edgar Award. After that, between screenplays and his own novels, I barely got a chance to see him until we decided to write at least one book a year together. That’s been absolutely wonderful. We’ve been able to meet on both personal and professional levels, and what mom wouldn’t love that?

You frequently incorporate your love of animals into your books.

I’ve always had dogs in my life and my homes. Dogs are full of love, and that love should be returned. At one time, I had 12 rescue dogs on the property on the hill. It was very natural that my characters in my books had animals and cared as much about them as I did. They were vets, trainers, search and rescue, animal whisperers.

One meeting between Jane MacGuire and Seth Caleb took place when she took her dog, Toby, to the vet on Summer Island. And, like all dog lovers, I want my dogs to live forever. Summer Island was doing research to extend their lives far beyond the usual span. Of course they were! It’s what I’d do, and I’m the writer.

What can you tell us about yourself that your fans might not already know?

There’s nothing surprising about me, no hidden dreams or skeletons in my closet. I’ve never tried to be anything other than what I am—just a hardworking writer who loves what she does and is fortunate enough to have a family, friends, and animals she cares about. I’d say that makes me pretty darn lucky.