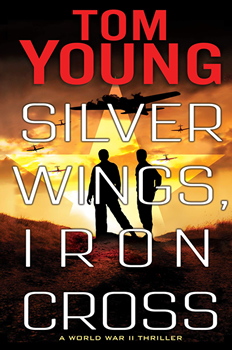 World War II Lieutenant Karl Hagan earned his wings the hard way. But when his plane is shot down behind enemy lines, he’s forced to make the hardest decision of his life: trusting the enemy.

Oberleutnant Wilhelm Albrecht wore his Iron Cross with pride. But when his U-boat is attacked in a devastating air raid, he abandons ship and finds an unlikely ally: the pilot who bombed him.

From the smoke-filled skies over Europe to the fire-blasted waters of a Nazi naval base to the battle-scarred German countryside, the American and the German must form an uneasy truce if they hope to survive. It is November of 1944. The tides of war have turned. The Allies have taken back France, and German troops have retreated. But for Karl and Wilhelm, the war is far from over. Both must be prepared to lie for the other, fight for the other, or die with the other. But their short-lived alliance won’t truly be put to the test until they reach the end of the line—inside a POW camp…

The Big Thrill reached out to author Tom Young to find out more about his latest thriller, SILVER WINGS, IRON CROSS:

SILVER WINGS, IRON CROSS comes out as we mark the 75th anniversary of the end of World War II. I hope readers will take away a renewed appreciation for the accomplishments and sacrifices of the Greatest Generation. More specifically, I hope readers will feel the novel puts them in the scenes with the characters: to experience the thunder of depth charges, the cold of high altitude, the wind-rush and opening shock of a parachute jump, the fear of capture while on the run.

I hope this novel appeals to people who enjoy World War II epics. During the mid 20th century, authors such as Norman Mailer, James Jones, and Herman Wouk wrote epic stories of the war they’d helped fight. I don’t dare compare myself to those greats, but I will say SILVER WINGS, IRON CROSS was inspired by their work.

Without giving too much away, I’ll just say I was surprised to learn of the vast numbers of Allied POWs held by Germany. Most people are familiar with the infamous death camps of the Holocaust. But a lot of folks haven’t read much about the network of Luftstalags, or “air prisons,” which held downed Allied airmen. These prisons were not death camps like Auschwitz or Dachau, but they were bad enough.

You might say my grandfather’s stories from WWII became the first research I did for this novel. He served as a mechanic on B-17 Flying Fortresses in the Eighth Air Force, 94th Bomb Group, 331st Squadron. SILVER WINGS, IRON CROSS opens with the 94th Bomb Group launching a raid on German targets.

I could go on for pages. But just to name a few of the more offbeat influences: the French author and aviator Antoine de Saint-Exupery made me want to fly and to write. Richard Bach’s books put me in a cockpit before I ever actually flew. My fellow North Carolinian Charles Frazier showed me how every sentence could become a work of art.

Tom Young served in Iraq and Afghanistan with the Air National Guard. In all, Young logged nearly 5,000 hours as a flight engineer on the C-5 Galaxy and the C-130 Hercules, while flying to almost 40 countries. Military honors include three Air Medals, three Aerial Achievement Medals, and the Air Force Combat Action Medal.

In civilian life, Young spent 10 years as a writer and editor for the broadcast division of the Associated Press. Currently, he works as a pilot for Republic Airways. He holds BA and MA degrees in mass communication from the University of North Carolina at Chapel Hill.

Young’s novels include The Mullah’s Storm, Silent Enemy, Sand and Fire, and The Hunters. His nonfiction works include The Speed of Heat: An Airlift Wing at War in Iraq and Afghanistan. Young’s books have received high praise and starred reviews from Publishers Weekly, Kirkus Reviews, and other publications.