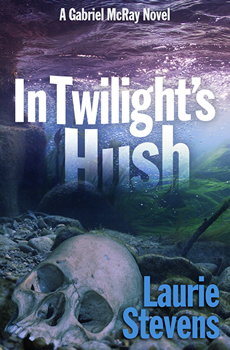 Detective Gabriel McRay investigates a cold case from 1988 involving a missing teenager named Nancy Lewicki. Evidence is sparse and Gabriel has no leads. Much to his dismay, a celebrity psychic, Carmen Jenette, hypes the unsolved case on her television show. Gabriel warns Carmen not to interfere. Meanwhile, strange dreams of water and corpses haunt Gabriel’s sleep. They unnerve him as he plans his wedding to LA County Medical Examiner, Dr. Ming Li. When the psychic’s life is threatened, Gabriel connects the dots back to the missing girl and realizes his cold case is burning hot. Someone doesn’t want Nancy found and will kill to keep her hidden.

The Big Thrill recently caught up with award-winning author Laurie Stevens to learn a little more about the fourth installment in her critically-acclaimed Gabriel McRay series, IN TWILIGHT’S HUSH:

There is a psychic in the book who claims to see a ghost, although the main character, Detective Gabriel McRay, never sees it. Gabriel remains a staunch skeptic using gumshoe detective work to trudge through a cold case. Then, at the very end of the book, something strange happens that makes him reconsider his position. By that time, he kind of wants to believe in a little magic.

Why is this series so focused on the human psyche and psychology?

The whole series chronicles the detective’s healing process as he works through a childhood trauma. The PTSD (post-traumatic stress disorder) impacted his life, and I consulted professionals and did a lot of research to make his psychological journey as true-to-life as possible. Each case Gabriel works triggers a key point in his recovery, which aids him in a sort of strange and demented way.

I noticed that my characters had become nicer people. I’m hoping that means I’m evolving somehow. 🙂

Laurie Stevens is the author of the Gabriel McRay thriller series. The books have won 12 awards, among them Kirkus Reviews Best of 2011 and a Random House Editors’ Book of the Month. When it comes to writing the “ultimate cat-and-mouse thriller” Suspense Magazine finds “Laurie Stevens to be the leader of the pack.”

Laurie lives near the setting of her books, the Santa Monica Mountains, with her husband, two snakes, and a cat.