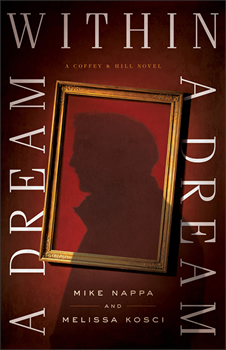 A DREAM WITHIN A DREAM is the third and final installment of Mike Nappa and Melissa Kosci’s Coffey and Hill novels. Trudi Coffey is one half of Coffey and Hill Investigations. The other half is Samuel Hill, ex-CIA, current detective for the Atlanta Police Department, and Trudi’s ex-husband. They no longer work side by side, but their lives continue to intertwine in dangerous and exhilarating ways. Inspired by Edgar Allan Poe’s poem of the same title, nothing is as it seems in this tale.

Dream is an artist with a flawed memory. Plenty of people want what Dream seemingly doesn’t know he has: a potential clue to solving the theft of paintings from the Gardner Museum—the return of which is worth five million dollars. Trudi isn’t aware of this, and when Dream presents himself to her in a strange way, she considers him crazy. And readers are led to the same conclusion since the chapters featuring Dream are the only ones written in first person—both present and past tense. A dream within a dream? Maybe.

Nappa and Kosci’s novel is not black or white or even gray. It is a kaleidoscope of life-or-death conflicting interests centered around one man. Samuel attempts to keep Dream safe from a Boston mob, Trudi is seeking Samuel, and an FBI agent with the Art Crimes Team is after Trudi, Samuel, and Dream for information. Throw in other dangerous characters and Trudi’s trusty and capable assistant, Eula, and the novel becomes a tight and tense adventure sure to please any mystery reader.

Co-author Melissa Kosci graciously took the time to speak with The Big Thrill.

The first two Coffey and Hill novels, Annabel Lee and The Raven, were written exclusively by Mike Nappa. How did you and Nappa partner for the third?

It was a unique journey over several years from strangers to co-authors. Mike was my agent for a while, but we amicably parted ways. Years later after a major personal loss, he reached out with a proposal to finish this final book in the series that he wasn’t able to write. I read the first two novels and the first 20,000 words that he had written. We had a long call about the characters and where he saw the book going. Then I wrote an outline and three chapters for discussion.

Once we were both happy with the direction, I wrote the rest of the book. I had never considered being a co-author, but it turned out to be one of the best opportunities I’ve ever had. There won’t be a fourth Coffey and Hill book; however, each novel has a standalone plot and can be read individually. And I would really love to give Eula her own series.

Eula has a supporting role in the novel, but stole her scenes, so to speak. She’d make a great lead. You wrote the remainder of A DREAM WITHIN A DREAM, but was there continued communication with Nappa?

We talked almost exclusively via email, with a call now and again. We have similar writing styles, so the biggest thing we really had to discuss were the characters. I had to make sure I fully understood the characters as he envisioned them, especially those returning from previous books. It took me a hot second to get Samuel right, but once I did, he became one of my absolute favorite characters; he’s such a pain in the butt.

Are you as much of an Edgar Allan Poe fan as Mike Nappa?

Before I wrote this book, I had read some Poe and enjoyed it, but hadn’t been obsessed like Mike. Now I really appreciate Poe a lot more—the darkness and suspense is right up my alley.

Tell us about your day job and writing routine.

I have an office off our main living area, with two desks—one set up for my day job and the other for writing. At first, I worried that the stress of my day job would leak over to my writing desk, but it actually works. I’m a commercial property manager for grocery-anchored shopping centers. I like that I meet a lot of people in my job—tenants, contractors, city officials, etcetera. Having that broad background helps me craft interesting characters, both physical characteristics and personality. I carry a notebook around with me. My day job also gives me the chance to travel—mostly to Florida and Georgia—which helps me develop settings. It was pretty cool that Mike picked Atlanta. I’ve been there for work. The chase scene in Buckhead is an area where I toured shopping centers. The “disco” Kroger shopping center with the mural on the side of the building is owned by a company I once worked for, and the condo where Trudi and Dream stayed briefly shares a parking lot with another of that same company’s properties.

A DREAM WITHIN A DREAM is not your first book. Tell us a little bit about your other projects.

Under the pen name M. S. Kaye, I’ve written several mainstream novels, primarily romantic suspense and paranormal. I also have a novel under the pen name Melissa Koslin to be released by Revell in the summer of 2021.

Do you belong to any networking organizations?

I’ve been involved with the Florida Writer’s Association (FWA). They have some great local groups. I co-led one of the groups for a while and ran the Clay County Critique for several years. I’ve won several of the FWA’s Royal Palm Literary Awards.

Mike Nappa is an entertainment journalist at FamilyFans.com, as well as a bestselling and award-winning author with more than one million books sold worldwide. When he was a kid, the stories of Edgar Allan Poe scared him silly. Today he owns everything Poe ever wrote. A former fiction acquisitions editor, Mike earned his MA in English literature and now writes full-time. He is the author of Annabel Lee and The Raven.

Melissa Kosci is a fourth-degree black belt in and certified instructor of Songahm Taekwondo. In her day job as a commercial property manager, she secretly notes personal quirks and funny situations, ready to tweak them into colorful additions for her books. She and Corey, her husband of 20 years, live in Florida, where they do their best not to melt in the sun.