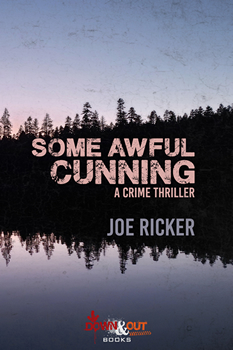 Ryan Carpenter is an underground relocation specialist who helps people escape the danger and traumas of their life and start over. After agreeing to help the young wife of a Texas oil baron relocate her stepson to escape criminal prosecution, Ryan learns more than he wants to about the oil baron, his wife, and the stepson.

Haunted by his own forced relocation, Ryan betrays his client and is forced to scramble for his life, which only puts him face to face with the childhood past he’s been trying to escape his entire life. His flight brings him from Albuquerque, New Mexico, back to New Orleans, Louisiana, where Ryan learned his underground trade as a relocation specialist or “travel agent.” There, Ryan seeks the help of his former mentor to escape the endless resources of the people who will stop at nothing to find Ryan and have him killed.

But first, Ryan’s mentor needs a favor, and that favor forces Ryan back to Ironwood, Maine, a small timber town where Ryan grew up, and where the one person who might figure out who Ryan really is is an ambitious deputy who will stop at nothing to become sheriff. A town where everyone remembers the tragedy that took Ryan and his family’s life.

Or so they thought…

The biggest challenge was also the biggest opportunity. I got the idea for the novel while I was working timber in Maine during the winter of 2013 – 2014, but I needed more than a Maine setting. I knew the novel would be primarily set in Maine, but I needed to include some other places as well. That’s what presented the biggest opportunity, because I was able to take a three-month, 15,000-mile road trip with my dog to see a large part of the country that I’d never even been to.

CHARACTER. I had the idea for a character similar to Ryan Carpenter for a while, but as I developed him more the plot and setting began to take shape as well.

I want them to leave with a significant impact from Ryan Carpenter, and the things he’s struggled through and escaped—the experiences that have shaped him into the man he is by the end, and what toll those experiences might take on a person like Ryan Carpenter.

The thing that attracts me the most to this book’s genre (literary noir) is the same thing that turns a lot of people away from crime fiction—this misinterpretation of the story being solely about violence. The crime fiction I’m attracted to is the kind that helps me understand why a particular character chooses violence, what has led them to violence, or how they’ve escaped from violence.

My three most influential authors are Flannery O’Connor, Edna St. Vincent Millay, and Jim Thompson. Some of the most influential books I’ve read are Will Christopher Baer’s Kiss Me, Judas, Craig Clevenger’s The Contortionist’s Handbook; and Jonathan Lethem’s Motherless Brooklyn.

Joe Ricker is a former bartender for Southern literary legends Barry Hannah and Larry Brown. He has also worked as a cab driver, innkeeper, acquisitions specialist, professor, and in the Maine timber industry. He currently lives in Reno, Nevada, and spends much of his free time walking uphill.