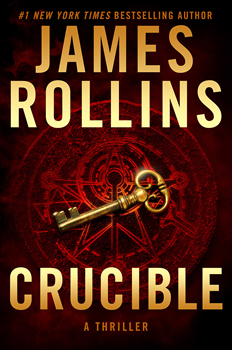 “You are my creator, but I am your master. Obey!”

This cruel retort, made by the monster in Mary Shelley’s classic tale, Frankenstein, never fails to send chills up readers’ spines.

But should the events depicted in James Rollins’s latest novel, CRUCIBLE, come to pass and scientists soon develop an artificial intelligence capable of warp-speed learning capacity, fact will be much scarier than fiction.

Rollins has written enough bestselling novels to fill a tall bookcase. In most of them, a historical event or artifact is the catalyst for a modern-day catastrophe. Sometimes Rollins will find the perfect plot concept from reading an article. Occasionally, it’s sparked from his travels.

“I’ve always got my antenna up for those bits and pieces from which I can construct my novels,” Rollins says. “I’m looking for that historical mystery that ends in a question mark; that bit of science that makes me go, ‘What if? Where is that headed?’”

In CRUCIBLE, the concept struck while watching a National Geographic television episode. It was about a witch hunters’ tome written in 1487 called the Malleus Maleficarum. Translated, the title means The Hammer of the Witches.

“European witch hunters picked on women who studied the natural world. These women dabbled in pagan healing arts, curing people in their ancient villages,” Rollins says. “Of course, being a male-dominated world, they were persecuted for questioning the dogma of the Bible or men in power. The inquisition led to almost sixty thousand deaths.”

Through further research, Rollins stumbled onto another odd little historical fact: there is actually a saint for witches. Her name is Saint Columba.

“I was raised Roman Catholic and went to Catholic schools, so I was well versed in the canon of saints,” Rollins says. “Still, I was somewhat surprised that there was a patron saint of witches in Spain.”

Despite this discovery and his excitement over the Malleus Maleficarum, Rollins was still in a quandary as to how he’d create a thriller around the blood-soaked tome. “It was one of those kernels of a story I held onto for a while. It went into my ‘idea box’— which, basically, is a cardboard lawyer’s box sitting in the corner of my office.”

Rollins’s eureka moment came when he stumbled upon articles relaying a very dismaying occurrence: even today, women in scientific fields feel persecuted by their male colleagues. He points out that Donna Strickland, one of 2018’s three recipients for the Nobel Peace Prize in Physics—and only one of three women to receive this prize—has admitted that, like many of her female peers, she’s faced the scorn of male colleagues.

Rollins then knew what to do with The Hammer of the Witches. “I thought, ‘Why not build a story around that: a pairing of the persecution of women in the past with that of today’s women who work in scientific fields?’”

In CRUCIBLE, he names this latter-day tribunal the Crucibulum. Its mandate: Kill current-day witches—in this case, female scientists.

It starts with the slaughter of an international consortium of female researchers who are funding a young colleague’s artificial intelligence project. Because the girl, Mara Silviera, misses the meeting, she escapes and is on the run—with a version of her AI project, which she calls Eve.

But the Crucibulum also has a version of the program, stolen when it crashed the demonstration.

Standing in the Crucibulum’s way is Rollins’s Sigma Force: the elite group of former Special Forces soldiers who fight against technological threats under the auspices of the U.S. Military’s Defense Advanced Research Projects Agency (DARPA).

It’s up to Commander Grayson Pierce—and his best friend, Monk Kokkolis—to get it back before it is used to unleash holy hell on earth. At the same time, they must chase down Mara and convince her to work with them in saving the world from what the Crucibulum has in store for it.

Failure is not an option. Four significant lives are at stake. Having risen like a phoenix from the ashes, Sigma Force’s dark-mirror version, the Guild, kidnaps Gray’s girlfriend—the assassin, Seichan—along with Monk’s young daughters, Penny and Harriet. During the abduction, Monk’s wife, Sigma Force’s Kat Bryant, sustains a brain injury that puts her in a life-threatening coma.

In other words, there are a lot of ticking clocks.

And that’s just how Rollins likes it.

“When I construct a story, I’m always looking for that overarching global topical threat,” he says.

In this case, it’s AI’s ability to leap beyond its creators.

“But I also believe that what really grabs readers is when the threat is more personal,” Rollins adds. “In this case, his daughters have been kidnapped along with Seichan, now pregnant. At the same time, they have to stop this global threat. They are struggling with this juggling act.”

According to Rollins, one of the joys of writing a series is watching the evolution of his characters. “Readers have seen Monk fall in love with Kat and have children with her. What does that mean now when he has to be out in the field, putting his life at risk? How does he balance his professional and personal life? People can relate to that.”

As with most of his books, Rollins shifts the narrative through the points of view of the novel’s various characters. “In one book, I included the point of view of a military war dog,” Rollins says. “In the last book, it was from various castes in a wasp system.”

In CRUCIBLE, not only are readers following Gray and Monk, but they also follow Seichan as she tries to protect Monk’s daughters; and they are there with Kat, despite her coma.

Still, the most unusual POV belongs to Eve. Rollins admits that creating the right narrative voice for an AI program was no easy task. “I knew I wanted to personify what it would mean for AI to develop a human level of intelligence and did a lot of research: talked to different scientists in the field. Some said, ‘Oh, this is going to be great!’ Others were, like, ‘This is going to be a big challenge for us too.’”

Rollins succeeds brilliantly in bringing Eve to life and allowing the reader to follow her evolution. In fact, the reader is torn between empathizing with the AI program and fearing her.

There was one thing every scientist agreed on, says Rollins: “If we’re going to survive the appearance of a human-like intelligence that might quickly grow into a ‘super intelligence’—something that could potentially consider us a competitor for resources and eliminate us or enslave us—it would be a good idea to build an AI that is friendly. That has empathy for the human condition. That can relate to us on a human level.”

He asked scientists if this were possible. One suggestion, currently being tested, is to create algorithms that replicate the human hormones that drive our emotions. “If you can build in these sorts of mirror programs, you may be able to build a level of emotionality into your creation,” Rollins says.

Before tackling the task of Eve’s advancing intellectualism, Rollins re-read a 1959 science fiction novella by Daniel Keyes: Flowers for Algernon. In that story, the antagonist, Charlie, is a mentally impaired man who undergoes life-altering surgery that makes him a genius. Sadly, like the laboratory rat tested before him, the advancement lasts only a short period. “It’s very tragic,” Rollins says. “Still, between it and what I learned from AI scientists, I was able to personify Eve.”

The researchers emphasized the importance of teaching empathy to the AI program. The example given to Rollins: before playing a video war game, the researchers paired up the AI with a partner—a fictional bot.

“The AI’s goal was to protect its partner,” Rollins says. “That way, it learned to empathize with the fictional player.”

For Eve’s humanization training, Rollins leaned on his veterinary background. “I wanted to take this to a more personal level, so I gave her a little beagle puppy—Adam.”

One of the most touching parts of CRUCIBLE comes at the very end: Kat, deep in a coma, fights for her life. But as it pertains to the human brain, modern medicine is still in the Dark Ages.

Rollins has no doubt that AI may hold the answer to the brain’s mysteries and, for that matter, all our medical problems.

“Before starting CRUCIBLE, I read a nonfiction book called Our Final Invention: Artificial Intelligence and the End of the Human Era. It’s about the ‘threat’ of AI, and it’s quite terrifying,” he says. “I don’t think I’ve been that disturbed by a nonfiction cautionary tale since Richard Preston’s The Hot Zone. I remember reading that in college and being really scared. Here, I had the same reaction. At the same time, in my research about AI—where it’s headed and how it’s being used—there is miraculous potential for AI. But there is also a potential for disaster. The question is: Are there lines we shouldn’t cross? And if we’re going to cross them, who will be the gatekeepers? Those were the topics I tried to balance in my novel.”

Rollins separates current fact from fiction in notes found in the back of his books. “Ninety percent of the science involved in Kat’s medical treatment is based on current research and the progress being made in that field. It’s my way of saying, ‘This may sound like science fiction, but it’s not. We’re right at the cusp of being able to do what you’ve read in this novel.’”

At one point in the book, Eve forces Monk—whose neuroprosthetic hand is one of DARPA’s weaponry successes—into an interesting alliance. “We already know that the wireless systems of cars have been hacked,” Rollins says. “Today, wireless prosthetics are so advanced that they also run that risk.”

There is no doubt that Artificial Intelligence can take us where no man has gone before. Rollins believes this includes time travel. Exactly when, though, he can’t say.

If we survive, Rollins feels comfortable staking his claim in the Singularitarian camp. “It will be a big boon for humanity. We’ll see an escalation of technology boosted by AI—and we may be joining Eve on her journey even sooner than I hinted at the end of this book.”

Sadly, Rollins points out, there is only a small portion of the industry that is trying to develop the friendly AI system. “Most companies are just rushing to be the first to cross the AGI goal post. Only a smaller group is working cautiously with the goal of friendly AI—creating something that can grow alongside us.”

Rollins’s novel gives readers a balanced look at both the beauty—and the danger—of artificial intelligence.

“That was my goal: to be a cautionary tale. Not all doom and gloom, but to show that there is potential for a wonderful outcome—if we look for that friendly gatekeeper—because we’re going to need someone who will be able to fight at the level of an Artificial Super Intelligent that might be more dangerous,” he says. “We’re going to need a soldier who can fight on our side. The only way we’re going to do that is to develop something of equal potency, but one that has empathy, sympathy, and some kind of relationship with the human condition.”

In CRUCIBLE, Rollins has been able to answer a lot of Artificial Intelligence’s big What Ifs. By doing so, he hopes to inspire readers—both men and women—toward STEM academic disciplines: science, technology, engineering, and mathematics.

“We definitely need more scientists in the world—and fewer politicians.”

Click here to listen to an extended audio version of Josie Brown’s interview between James Rollins in her Author Provocateur podcast.