Rooting for an Unlikely Hero 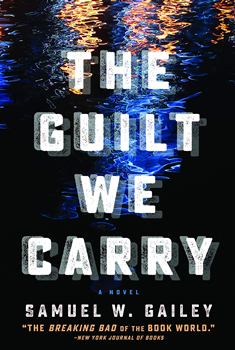 Alice O’Farrell is an unlikely hero—a down-and-out drunk who lives in sleazy motels and tends bar at a strip club. But you quickly find yourself rooting for her in Samuel W. Gailey’s highly acclaimed new thriller, THE GUILT WE CARRY.

Alice has been drifting in a guilt-ridden haze ever since she was a teenager because she blames herself for the tragic death of her little brother. But now her life dramatically changes course when she finds a bag with $91,000 in drug money—and then flees the scene with violent drug dealers in hot pursuit.

“I wanted to write a female version of Clint Eastwood,” Gailey says. “I’m talking about the Clint Eastwood back in the ’60s and ’70s. A character that has a tortured past, they’re a loner, and kind of a reluctant hero.

“I like writing about how a little twist of fate can completely change a person’s life. Everyday people who get a bad turn of the coin and their lives are irrevocably altered. Then they keep making bad decisions and getting themselves deeper and deeper into trouble. The reader knows it’s a train wreck, but you keep reading. Because it makes for a good story.”

The theme of the book, as the title suggests, is about overcoming guilt. “Most people grapple with some kind of guilt, some mistakes they’ve made,” Gailey says. “I think it’s important for people to figure out a way to let it go and find a way to forgive yourself.”

In Alice’s case, it’s guilt over the fact that—when she was 15—her little brother accidentally locked himself in a clothes dryer and died while she was babysitting him. Unable to deal with her parents’ grief, she runs away, becomes an alcoholic, and has been living a nomadic existence for six years on the road when we first meet her.

“Guilt can cripple people, if you let it. It can tear you apart. Alice lets it happen, she self-medicates, she makes poor choices,” Gailey says. “But, in the end, she does find a way to let it go.”

The turning point in Alice’s life comes after she wakes up in a bedroom with a dead man next to her along with a bag filled with the $91,000 in drug money. She takes the money and flees.

But a fascinating bad guy named Sinclair—a highly-unusual, brilliant, and erudite drug dealer—is soon chasing after her to get his money back. Stunted in his growth as a child and still extremely short, Sinclair is very polite and harmless-looking—but he’s also capable of torturing and killing people to get what he wants.

Gailey explains that he wanted to write a different kind of drug dealer who wasn’t the usual stereotype.

“Sinclair is a contradiction. He’s this man who is very kind and inquisitive to people, but on the flip side he can condone and commit these brutal acts. Sinclair is about five foot tall, highly educated, ruthless, and shrewd. Because of his lack of size, he’s underestimated by people. Like with Alice, a simple twist of fate determined his life. If he had normal growth hormones, his life might have been different. But it gave him resentment and anger and he chose a different path.”

As Alice flees from Sinclair with the drug money, Gailey somehow manages to turn her from a thief and a drunk into a remarkably sympathetic character. Much of that is accomplished by flashbacks to the accident that killed her brother, and show how she got herself into the situation she’s in now.

“The accident that killed her little brother wasn’t really her fault,” Gailey says. “I think people share some empathy for a person involved in this kind of thing when they see that. Her young age and how she cares for and heals some people while she’s on the run also helps the reader root for her to get out of this mess.”

THE GUILT WE CARRY is Gailey’s second novel. His first, Deep Winter, is a story about a character who suffered a brain injury when he was six, and now is a boy trapped in a man’s body. He’s accused of murder in a small Pennsylvania town and has to prove his innocence. The New York Times called Deep Winter “beautifully written,” and it’s been optioned for a movie.

Gailey—who grew up in a small town in Pennsylvania with a population of less than 400 people—says, “I’ve always liked grit lit. I’m drawn to stories—both reading and writing—about the underbelly of different communities and societies. Working class, hard-working people who need to struggle to survive.”

Gailey now lives on a picturesque little island called Orcas off the coast of Washington, between Seattle and Vancouver. He moved there with his wife Ayn Carrillo Gailey—also a successful writer—and their daughter after spending more than 20 years in Los Angeles working in production and script development for TV and movies.

“It was a quality of life choice. We wanted a life that was a little more simple. We have roughly 2,500 residents, no traffic lights, no chain stores, you need to take a ferry or seaplane to get here,” he says. “Orcas is a close-knit artistic community. It really is a writers’ paradise. I like to write outside and you’re surrounded by all those mountains and bodies of water. It’s incredible.”

Next up for Gailey is a novel he’s working on called Black Walnut. “It’s a straight-up mystery about an alcoholic pastor who finds a dead body outside of his church one morning. We don’t know who’s dead and who killed them. So it’s the story of this alcoholic pastor trying to unravel the mystery,” he says. “It’s set in the same place as Deep Winter was, but it’s a different time period. There will be a few characters from the first book, but they will be peripheral. I am drawn by returning to the same community at a different time.”

Samuel W. Gailey was raised in a small town in northeast Pennsylvania (population 379) and now resides on a remote island in the Pacific Northwest. THE GUILT WE CARRY is his second novel, following the critically acclaimed Deep Winter. Gailey’s novels are intriguing studies of human nature and portray how the simplest act of fate can alter and shatter lives. Before writing novels, he worked in film production and eventually became a screenwriter, writing and developing shows for Showtime and Fox. He lives with his wife, author Ayn Gailey, and daughter on Orcas Island, where he is a founding member of the Orcas Island Literary Festival.

To learn more about Sam and his work, please visit his website.