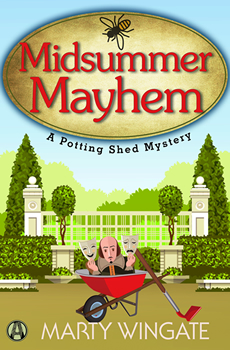 Shakespeare comes to Hampshire—and Pru Parke is cast into the role of cunning detective gardener once again.

Pru’s friends and neighbors are abuzz with the news of an acting troupe putting on an outdoor performance of A Midsummer Night’s Dream. And while many are eager to catch a glimpse of famed actor Ambrose Grant, Pru can’t wait to finally see the spectacular gardens of the private estate where the play will be performed. When the estate’s gardener abruptly quits—frustrated with actors trampling his beloved plants—Pru is called upon for her gardening expertise. She throws herself into creating magical woodland forest scenes, and is quickly drawn into the excitement of putting on a play, as she watches the drama on and off the stage. But the play’s suddenly no longer the thing, when one of the actors turns up murdered.

Pru’s husband, Detective Inspector Christopher Pearse, relies on Pru’s knowledge of all the players in this particular intrigue, and Pru finds herself using rehearsals to investigate. But playing the role of private eye could prove perilous for Pru, as she closes in on a murderer who won’t let anyone—least of all the gardener—keep him from stopping the show . . . dead.

I spent a day with the cast and crew of Shakespeare Live’s (outdoor) production of A Midsummer Night’s Dream, and everyone was willing to share a story or two. On-the-ground research is fabulous.

Ray Bradbury continues to be a shining light for me. His love for the craft was infectious. 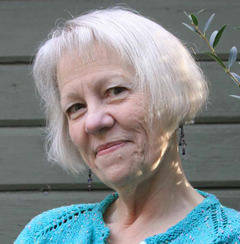 Bestselling author Marty Wingate shares her love of Britain in three mystery series, The First Edition Society (Berkley) about Hayley Burke, the curator of a collection of books from the Golden Age of Mystery; the Potting Shed books (Alibi), featuring Pru Parke, a middle-aged American gardener transplanted from Texas to England, and Birds of a Feather (Alibi), following Julia Lanchester, bird lover, who runs a tourist office in a Suffolk village. Marty also leads garden tours to Britain, spending free moments deep in research for her books. Or in pubs.