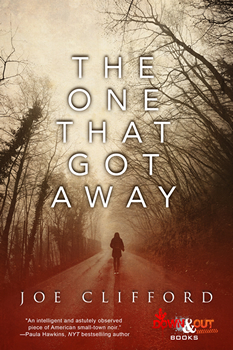 In the early 2000s, a string of abductions rocked the small upstate town of Reine, New York. Only one girl survived: Alex Salerno. The killer was sent away. Life returned to normal. No more girls would have to die. Until another one did.

It’s been 12 years since Kira Shanks was reported missing and presumed dead. Alex Salerno has been living in New York City, piece-mealing a livable wage, trying to forget those three days locked underground and her affair with the married detective who rescued her. When a hometown reporter requests an interview, Alex is drawn back into a dangerous game of show and tell in an insular town where everyone has a secret to hide. As details emerge about the night Kira Shanks went missing, Alex learns why so many are willing to kill to protect it. Can Alex Salerno escape the noose once more in time to reveal the horrific truth?

In the modern vein of Girl on the Train and The Bone Collector, THE ONE THAT GOT AWAY is a dark psychological thriller featuring a compelling, conflicted heroine and a page-turning narrative that races toward its final, shocking conclusion.

Author Joe Clifford spent some time with The Big Thrill discussing his latest novel, THE ONE THAT GOT AWAY:

That they are glad they took the time to read it? I strive to write a very accessible prose, and an engaging story, above all. There are deeper themes, of course, things like the past and survivor’s guilt; whether it is ever truly possible to escape the noose meant for you. Those are the things that I, as the writer, am exploring, tapping into. But those explorations never come at the expense of writing a tight, compelling narrative.

My favorite crime books tend to be the hybrids, like Russell Banks’ Affliction. Is it literary? A thriller? I think a good book is a good book. If we’re talking about the genre strictly as crime, I hope that the addition I make is to broaden horizons, at least the critically perceived, implemented ones, which say genre can’t be “well written.” Seems crazy to say that, given how many amazing writers there are in crime, thriller, mystery, and noir today. But I think that is still a knock against us.

Yeah. That it was about my…mom. Which is doubly fucking weird when you get to stuff like sex scenes. I’ve been in therapy most of my life–but I don’t want to touch that one! But, yeah, I learned that Alex Salerno, the protagonist in THE ONE THAT GOT AWAY, carried a lot of my mother’s backstory. Which makes sense, since the book is set in her home region. Reine is a made-up town, but it’s based, loosely, on the stories she’d tell me of Schenectady.

No spoilers, but what can you tell us about your book that we won’t find in the jacket copy or the PR material? It’s based on a true story?

One of my friends, back when I was in grad school, signed me up for a year of Glamour. Y’know, trying to be funny. But the joke was on them. Because in addition to the numerous ways to apply a fuller shade of red and please my man, I came across a story that would seriously shake me up, for a long time. I’ve been trying to re-tell this story in a novel. It was tough because the original story was so harrowing, disturbing. THE ONE THAT GOT AWAY tones it way down. And of course I make stuff up because it’s fiction. But the seed is still there, and probably easy to find searching back issues of the magazine. 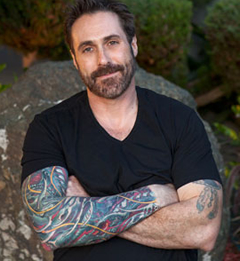