Darkness in a Town of Sunshine 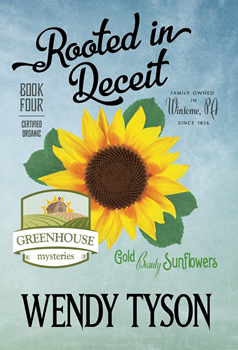 Fall is an easy season to love—but if you’re not quite ready for the shorter days and lower temperatures, you can grab a last blast of summer sunshine in the latest in Wendy Tyson’s cozy Greenhouse mystery series, ROOTED IN DECEIT.  The small town of Winsome is still basking in the August heat and Megan Sawyer is preparing for the grand opening of their wood-fired pizza farm. Things are heating up in Megan’s love life as well. But like unwelcome flies in the honey pot, Megan’s ne’er-do-well father arrives for a visit with his new high-maintenance Italian wife, Sylvia.

Sylvia is seeking pieces for her boutique and arranges a meeting with up-and-coming local artist Thana Moore. Trouble is, tempers flare between the two. Worse, Thana is later found murdered and Sylvia becomes the prime suspect. Yet Sylvia isn’t the only one who has been in conflict with Thana—Megan also fell out with her many years before, despite their being best friends once. Megan’s past and present lives collide as she tries to find the killer — a killer who isn’t done yet. The suspense builds and holds the reader right to the last pages, just as it has in the first three books of the series.

Fans of the series will also be pleased to see that the world of Winsome is as richly portrayed as ever and is a totally believable setting, something which Tyson takes very seriously. ‘’World building is incredibly important in the cozy genre,’’ she says. ‘’Readers want to open a book and spend time with the characters.  The setting, whether an organic farm in a small town, a western writers’ retreat house, an old library, or a big-city bakery, is part of the draw, and in a way, the introduction of murder and other crimes — and the tension and suspense they bring — only serves to increase that attraction. In a good cozy, I think the reader feels like part of the world that’s been so carefully built, so for them, the stakes for solving the mystery are heightened.’’

Related to the successful world-building is Tyson’s strength as a visual writer, with vivid descriptions that light up the page. She says that she uses photographs a lot to engage her muse. ‘’Whenever I see something that piques my interest — an abandoned building (I’m obsessed with abandoned buildings and towns), a forgotten park, the way someone’s shadow falls across pavement, I’ll take a photo and file it away. Often, I use these pictures for inspiration later.’’

It’s clearly something that works, such as with a subplot in Bitter Harvest, the second Greenhouse novel. ‘’I was inspired by a red Adirondack chair I saw while hiking in Vermont,’’ she says. ‘’The chair was placed on a trail, positioned to take advantage of a fantastic view and, presumably, the sunset. Its unusual positioning (who expects to see a chair on a hiking trail?) intrigued me, and I took a picture. Later I used that chair — relocated to a hill overlooking Megan’s farm in fictional Winsome — to set off a series of events. Its discovery marks the beginning of that novel.’’

Successfully building a fictional world is one thing. Maintaining it in a series is another — and it’s essential. Tyson’s approach is less about spreadsheets and more about knowing her characters inside out. ‘’I’d love to say I have an elaborate system set up to track my characters and their relationships, but the truth is, they’re very much alive in my head. I know what Bibi has for breakfast the mornings she’s feeling uninspired (cinnamon raisin instant oatmeal), how Megan likes to draw her bath (as hot as she can stand it, no bath bombs or bubbles), and whether Denver enjoys American football (shhh… he does not).’’ Her reasoning explains why these cozies work so well.  ‘’In a way, they have become old and familiar friends, and I remember the bits of their lives in the same way I remember what’s happening in the life of a close friend.’’

Her approach was also one born of experience. ‘’I saw it as a series from the start. I was several books into the Allison Campbell series at that time, and I knew that the cozy market (and my publisher) preferred series, so it was a given that any new idea would include more than one installment.’’ Yet experience alone can’t account for the way Winsome initially sprang to life. ‘’ When I first came up with the concept for the Greenhouse Series, the town of Winsome, its inhabitants, and some of the mysteries that could play out there came to me in almost a flash of inspiration. I saw the town, the farm, Megan, and her grandmother. As I sketched out my vision for my agent and publisher, I created synopses of the first three books, with tentative proposals for more.’’

As with all of her books, Tyson doesn’t shy away from some challenging issues as well. In ROOTED IN DECEIT, she touches on the issue of property/business development that isn’t really in keeping with an area of natural beauty and instead exploits it for its own ends, while also acknowledging that rural areas desperately need sources of employment.

Tyson says she doesn’t of course have all the answers but believes that there’s a lot that can be done. ‘’I do think it’s critical that residents, legislators, and regulators, whether on a federal, state, or local level, not be short-sighted when it comes to environmental impact. It’s a balancing act, for sure, but by avoiding political conflicts of interest, carefully measuring the potential consequences of growth, putting adequate regulations into place, and following through with consistent and appropriate enforcement, the tension can be reduced.’’

These are not in any way theoretical arguments for Tyson. While she currently lives on a micro-farm, she used to live in northeastern Pennsylvania, where the coal mines existed for decades. ‘’My husband’s grandfather and great-grandfather were coal miners. I saw first-hand what exploitation looks like. Drive through parts of the area and you’ll see the culm banks (piles of coal production waste), streams where nothing can survive. My grandfather-in-law had Black Lung. Exploitation can take many forms, and it’s not only the environment that can suffer. Education, awareness, sound (and unconflicted) scientific research, economic activism…all are needed.’’

Tyson isn’t finished with Winsome yet. She’s currently writing the fifth Greenhouse mystery, Ripe for Vengeance, and it’s due for release in June 2019. A new series is on the horizon too. ‘’The first book in my Percy Powers crime series, A Dark Homage (Down & Out Books), is due to be released in January 2020. I’m also working on a standalone thriller and some short fiction.’’

And she doesn’t see the appetite for cozies waning any time soon. ‘’I think in general cozies have staying power. But now, in particular, I think cozies appeal to our need for escape. The last few years have been tumultuous — and not just politically. School shootings, catastrophic weather events, the threat of terrorism. It’s easy to feel the world is out of control. Readers know what they’re getting when it comes to cozy mysteries. Cozies, with their strong sense of place, relatable characters, and drive for justice, provide a safe haven, if only for a few hours. I love that about cozies.’’