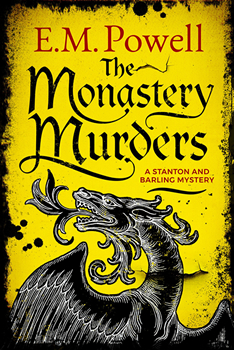 E. M. Powell, author of the bestselling Fifth Knight medieval thrillers, has returned with the second installment of her Stanton and Barling Mysteries, THE MONASTERY MURDERS.

In THE MONASTERY MURDERS, Aelred Barling, clerk at the court of Henry II, along with his assistant, Hugo Stanton, are sent to investigate a brutal murder in a remote abbey in the Yorkshire Moors. It’s Christmastime, and the monastery, with its isolated location and unyielding culture, is the perfect backdrop for murder—or, in this case, a series of murders.

“The setting of my fictional Fairmore Abbey is integral to the plot,” Powell says. “The vast majority of the action takes place there.”

But the setting presented challenges too. “In some ways, that was very restrictive in that everything has to take place within the confines of the abbey walls.” It wasn’t only the physical structure of the setting that offered obstacles. “The medieval monastery was like a mini society,” Powell says, “with its own rules and laws, and was rigidly structured with almost every moment of every day accounted for. I had to make sure I reflected that. Developing distinct secondary characters was also quite a challenge as, unsurprisingly, almost everyone is a monk.”

The monastery setting, like a great locked-room mystery, only adds to the suspense of THE MONASTERY MURDERS. Indeed, it lends a deep sense of intrigue and foreboding. “The challenges also became, I think, one of the novel’s greatest strengths,” Powell admits. “Readers have said how much they like its claustrophobic atmosphere and the tense, volatile internal dynamics—as well as all the other murders, of course.”

The holiday time frame is another aspect of the book that lends to the plot. When asked how the season contributes to the story, Powell is frank. “I’d love to be able to give a sage answer but it’s really very simple: I needed snow for the plot. January is the best month for that. I also have an introduction scene to Stanton and Barling where they are attending a bear baiting in London, just before they are called to the first murder. Bear baiting took place on feast days and January 1st was celebrated as a feast day, the Octave of Christmas, so that worked. When I figured out times for the news of the murder to reach London, it worked out perfectly that Brother Cuthbert had been killed on Christmas Eve.”

Bear baiting may sound like something Powell made up for the sake of the book, but sadly it’s not. In her work, Powell brings to light a “sport” with cruel roots. “Some readers have commented about what a difficult read that scene was. I can completely understand that, as it was very difficult for me to research and to write. Bear baiting was a barbaric sport that was hugely popular in medieval times and continued to be so for many hundreds of years.”

Powell explains that a bear would be chained to a pit and forced to fight a number of dogs that had been let loose upon it. “Bears were extremely valuable and tended to be kept alive to face this terrifying torment over and over again.” The bears were not the only victims; the dogs faced mutilation and death. “I wish I could say that this truly horrible spectacle is now firmly in the past,” Powell says, “but it’s still carried out in many parts of the world, both openly or in illegal fights.”

Research on bear baiting wasn’t Powell’s only foray into the history books. In order to render the monastery with authenticity, Powell needed to understand what life was like in a medieval monastery. Unfortunately, visiting a 12th century abbey was not so simple. “Fairmore Abbey is a fictional Cistercian House but is a composite based on a number of real 12th century Yorkshire monasteries,” Powell says. “They all lie in ruins because they were destroyed by Henry VIII (he of the six wives—that one) between 1536 and 1540 as part of his transformation of the power structures of English society. He took over 800 monasteries, abbeys, nunneries, and friaries, and the 10,000 monks, brothers and nuns who inhabited them had to leave.”

That’s not to say remnants of the past don’t still exist. “The ruins are today maintained by organizations like English Heritage and are utterly fascinating to visit,” Powell says. “I probably had a bit of an advantage on the monastery mindset as well. I was raised as a Catholic in the Republic of Ireland and went to a convent school. A lot of what I read about the monastic life sounded very familiar.”

Powell herself has a compelling family history. Her great-grandmother, Mary, was Michael Collins’s sister. Powell explains that Collins was a soldier and politician who played a key role in the struggle for Irish independence in the early 20th century. “In 1921, he led the Irish delegation at the peace conference in London which resulted in the Anglo-Irish Treaty and the formation of the Irish Free State. He became leader of its provisional government. But the treaty meant that the island of Ireland was partitioned into North and South. In the Irish civil war that followed, he was assassinated by anti-treaty forces in an ambush in County Cork in August 1922 at the age of 31. Five hundred thousand people, almost a fifth of the population of the country at the time, attended his funeral in Dublin.”

So was Powell’s family history an inspiration for THE MONASTERY MURDERS? “For this one,” Powell says, “it was a Christmas present (yes, Christmas again—maybe there was something in the ether?) from my husband. I’d already been toying with the idea of a monastery-based novel. He gave me a copy of Medieval Monsters by Damien Kempf and Maria L. Gilbert. It’s a gorgeous book, depicting all kinds of bizarre and grotesque creatures from medieval manuscripts. I came across one particularly fabulous/terrifying entry and was so disappointed that it was too late for my purposes. But I did a bit of research and found that it had actually been composed in the 12th century. It was meant to be.”

And so is another novel in the Stanton and Barling series. Readers will be thrilled to know that the next novel, provisionally titled The Pilgrim Murders, is underway. “My crime-fighting duo are on pilgrimage to the shrine of the martyred Thomas Becket in Canterbury Cathedral, when a mutilated body is found in the crypt where the dead saint’s remains are stored.” 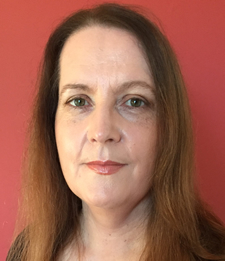 Born and raised in the Republic of Ireland into the family of Michael Collins (the legendary revolutionary and founder of the Irish Free State), she now lives in northwest England with her husband, daughter and a Facebook-friendly dog.