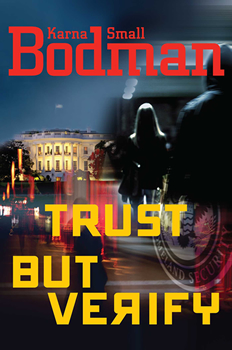 Like most writers, Karna Small Bodman started her adult life with a day job. Not an ordinary day job, like waiting tables or working in an office, but two day jobs in a row that uniquely prepared her to write a series of award-winning international thrillers.

Her first career was as a TV news reporter and anchor, first in San Francisco and later in Washington, DC, where she hosted a three-hour news/talk radio show and a nationally syndicated program on business and economic issues. The skills she learned there—keenly developed powers of observation and a deep understanding of the current cultural and political landscape—led to a position in President Ronald Reagan’s administration as deputy to Press Secretary Jim Brady. From there, she progressed to senior director and spokesman for the National Security Council.

Over the years, she met with the President almost every day, wrote briefing papers for him, and traveled on Air Force One. She flew to South America and the Far East to give speeches on the President’s economic policies and attended arms control talks with the Soviets. She even traveled with the team that briefed Pope John Paul II and the leaders of Great Britain, France, and Italy. When she finally left the White House for work in the private sector, Karna was the White House staff’s highest-ranking woman.

She had always wanted to write novels, and now was the time. She’d been honing her writing skills with articles, news scripts, and newspaper columns; and her political background made the thriller genre a natural fit. Her first four White House National Security novels—Checkmate, Gambit, Final Finesse, and Castle Bravo—were well received. “Write what you know,” writers are told, and Karna found success by taking that advice to heart.

Bodman took some time this month to talk to The Big Thrill about the newest in the series, TRUST BUT VERIFY, which brings back Samantha Reid as Director of the White House Office of Homeland Security.

Congratulations on your new book! Why not get things started with a few words about your writing journey?

I’ve always been writing. Initially it was all non-fiction: TV scripts when I anchored the news, policy papers and talking points when I served in The White House. When I had the time to concentrate on fiction, I thought about the national security issues we dealt with and wrote my first thriller inspired by President Reagan’s missile defense system—with a heroine who invents a new technology and villains bent on stealing it to cause havoc overseas. An updated version of that story, Checkmate, has just been released in print and e-book form.

Your knowledge of politics runs deep, from your years as a deputy press secretary and spokesman for the NSC to your time as the highest-ranking woman on the Reagan White House staff. How do you keep abreast of the changes in the political landscape? What kind of research do you do?

My morning ritual is reading The Wall Street Journal, along with other news and articles online. I’m addicted to TV news programs and I also keep in contact with my NSC, State Department, CIA and FBI sources.

What’s the most interesting or unusual thing you’ve ever done when researching a book?

I was sent to the South Korea by our government and was taken by army helicopter to the DMZ, where I had a CIA briefing. I learned that when we have visitors to the border, the North Korean guards rush up to stare at them. The Americans that attracted the most North Korean “attention” were Miss Universe and the Dallas Cowboy Cheerleaders.

Where did you get the inspiration for TRUST BUT VERIFY? Where did the title for the book come from?

The title was one of President Reagan’s famous phrases when referring to arms control talks I attended with the Soviets.  The inspiration came from the annual Federal Reserve conference attended by finance ministers and investment bankers. I thought: What if a pair of Russian oligarchs who have lost a lot of money through sanctions devise a heinous plot to target that conference? The stock markets would take a dive, so the villains short the exchanges, intent on making back their fortune.  Now, how can my White House heroine, working with an FBI special agent, ever discover and defuse the plan?

I devoured all of former CIA operative Charles McCarry’s thrillers. I also love books by Nelson DeMille, Lee Child, John Lescroart and Jason Matthews, who served in the CIA over 30 years and won the International Thriller Writers’s award for best first novel, Red Sparrow. I’ve also read many thrillers by my ITW colleagues in our “Rogue Women Writers” group, including Gayle Lynds, K. J. Howe, and Jamie Freveletti, where I learned a lot about pacing and character development.

What distinguishes your books from other novels in your genre?

One reviewer referred to “verisimilitude.” Serving in The White House did give me a “ring-side” view of how actual crises are handled and how international plots become intertwined with political intrigue. It was so rewarding when ITW founder Gayle Lynds made this comment: “Her new thriller is a cauldron of intrigue laced with authentic insider details that give one chills.”

Okay, imagine you could be a literary Yoda for a little while. What advice would you give to aspiring and pre-published writers?

First: join ITW and attend ThrillerFest. Second: read tons of books in your favorite genre. Third: even if you get initial rejections, keep writing. Remember the line, “You only fail if you quit.”

What’s next? Will we see more of Samantha Reid or Dr. Cameron Talbot?

Oh yes. I have already written the synopsis, outline, and several chapters of thriller #6 featuring Samantha Reid. I may include references to Dr. Cameron Talbot along the way—I’m working on that.

Thanks so much for the opportunity to talk about my writing and the release of the new thriller. I hope you will want to read the story, and I look forward to seeing many of you at ThrillerFest next July. 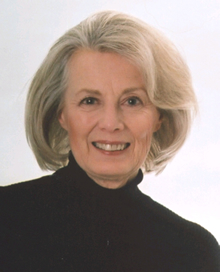 Karna Small Bodman served six years in The White House, first as deputy press secretary, later as senior director of the National Security Council where she was the high-ranking woman on The White House staff. She was also on the air for 15 years as a TV news reporter and anchor in SF and DC. Now she is the author of five international thrillers and speaker at over 350 events nationwide.

To learn more about Karna, please visit her website.