When Real Life Steps In 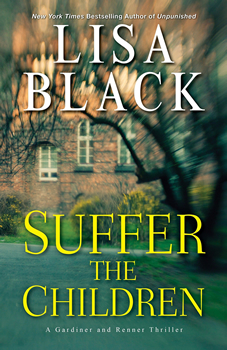 So how did she choose such an unusual crime setting for the book?

“Why exactly a juvenile detention facility, I don’t know…but I have always been interested in the structure and reform of prisons and detention facilities,” Black says, who, like Maggie, is a forensic crime expert as well as a bestselling author.  “We have a ridiculous amount of people in jail and it seems to me they could be so much more effectively structured.

“I was fascinated by Lisa Gardner’s Live to Tell, in which a devoted mother tried to deal with an unpredictably violent 8-year-old. I have no children myself, so everything about them is new to me. It was easy in a way, because there is such a huge variety of possible case histories and life issues. But it was difficult because I could find only general accounts of work in the juvenile justice system, not the specifics of the day in and day out workings of such a place.

“I tried, but never did get to visit my county’s juvenile center. I just had to do a lot of reading. And my cousin was a children’s social worker in her rural community, so she gave me a lot of first-hand knowledge.”

Just as unique as the story is the bizarre relationship between Maggie Gardiner and Renner, a vigilante cop who has killed a number of violent criminals in the name of justice. Only Maggie knows his secret, although in SUFFER THE CHILDREN, their fourth book together, Renner’s crimes come closer to being exposed.

“I had Jack’s first appearance running around in my head for years: a man who knows criminals come from disadvantaged backgrounds, so he plies them with food and drink and listens to them and makes them as comfortable as he can until he puts three bullets in the back of their heads. In his mind, this is the most responsible and most humane thing he can do.

“They met first in That Darkness, when Maggie managed to pick up his carefully hidden trail. At the end, though, Jack not only saves her life but Maggie pulls a trigger herself, so now she doesn’t quite know what to do. They have that survivor’s bond holding them together, but that’s not all of it. The truth is though Maggie knows she should turn him, and herself, in, she no longer wants to.”

As more secrets about Jack Renner’s past come out in this book, we asked Black where  she saw the Gardiner/Renner relationship heading? How much longer in her books will she and Jack be able to keep anyone from finding out about the people he’s murdered in the name of justice?

“That’s a good question!” she says. “Her ex-husband is on their trail—he hasn’t even grazed the truth, but he knows there’s something wrong. But on the other hand, Jack has suspended his sideline with only occasional lapses, so it’s not as if he’s leaving piles of bodies in his wake.”

The Gardiner/Renner books are set in Cleveland, Black’s hometown, instead of Florida, where she now works as a forensic investigator.

“It’s fun to introduce people to a place they probably haven’t heard a lot about before,” she says of the Cleveland location. “There’s so much history to the city, and I always love incorporating true facts and stories into the writing.

“I go back often to visit family and listening to them keeps me informed on a lot. Then I’ll also scout out places on my own during my visits. And, of course, there’s my great good friend Google and his sister Google Earth. And sometimes I may use the names of places that are no longer there for sentimental reasons.”

How much of her own real-life experiences as a forensic investigator does she use for the fictional Maggie Gardiner character?

“Lots! I try to use all the day-to-day details of how forensic testing and analysis actually work in the real world. Of course, I have to remember that I’m not writing a textbook or an article for a scientific journal —for example I would love to go on and on about fingerprint science but I’d bore my readers to tears.

“Maggie has always focused on work so much that the other stages of life — marriage, having children, buying a house, have sort of passed her by. She should have regrets about that, but now that her life has gotten interesting — strange, but interesting — she doesn’t. She’s a lot more driven, perfectionistic, and energetic than I am (but to be fair she’s also twenty years younger).”

Black has had a lot of fascinating twists in her career — both as an author and as a forensic expert.

“I was actually a thriller writer first — just not a successful one. Then I got into forensics and ‘CSI’ premiered, and an agent agreed to take me on.

“My very early (unpublished) books had amateur sleuths, a small-town cop, and a spy. My published books have stuck with forensic experts —the first two under my maiden name of Elizabeth Becka, and then the next seven in the Theresa MacLean series featured a forensic specialist in the Cleveland medical examiner’s office, where I worked for five years. With the Gardiner-Renner series I moved her to the police department.”

“Unfortunately, my next book, though finished, will not be released until November 2019. It’s titled Let Justice Descend and revolves around the two political parties, which turned out to be a rather overwhelming topic. The book after that, well, I know who I’m going to kill, but I don’t know how…or why…or who does it. It will come to me.”

Lisa Black has spent over twenty years in forensic science, first at the coroner’s office in Cleveland, Ohio and now as a certified latent print examiner and CSI at a Florida police department. Her books have been translated into six languages, one reached the New York Times bestseller’s list and one has been optioned for film. The first two, written as Elizabeth Becka, were followed by seven Theresa MacLean forensic thrillers. Her current Gardiner & Renner series includes That Darkness, Unpunished, Perish, and, in August 2018, SUFFER THE CHILDREN.