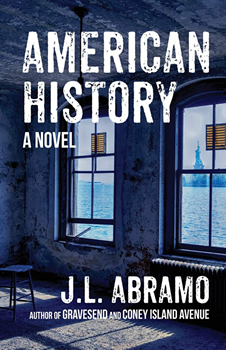 In one form or another, we all have families. So in one sense, we have a shared understanding of ideals like honor, loyalty, commitment, and legacy. But those values can look very different when viewed through the lenses of different families. Stories of warring clans are likely as old as storytelling itself, but we still can’t get enough of them.

AMERICAN HISTORY, due out this month from Down & Out Books, is J. L. Abramo’s ninth novel, and his first foray into the family saga. In AMERICAN HISTORY, about two families whose feud stretches from 19th-century Italy to modern-day America, Abramo weaves his unique perspective as a descendent of Italian immigrants into a novel he describes as a “sociological thriller.”

Abramo took some time to talk with The Big Thrill about the demands of writing a thriller that spans two continents and several generations.

I have always been compelled to find outlets for my creative instincts. I believe artists are driven by a need to discover a route by which internal feeling, thought, and belief can escape. The impulse to continue writing remains constant. I can’t not write.

You have a couple of series—the Jake Diamond mysteries and 61st Precinct novels. How do you know when a novel might be part of a series or when the story is better told on its own?

I didn’t know going in that Catching Water in a Net would be the first in a series. When the book was published, I received the friendly advice that writing another Jake Diamond mystery to follow was my best bet—and I took that advice into consideration. But if I wasn’t interested in learning more about Diamond and his cohorts, I would not have been able to fake it. So, more than anything else, the ability and desire to journey with Jake Diamond through four novels and a prequel has been motivated by my continued curiosity about where Jake and his sidekicks will take me next—and my sense that readers share that curiosity.

The decision to follow Gravesend with Coney Island Avenue was also motivated by my feeling that the characters had more to say to me and to readers.

In AMERICAN HISTORY you not only tackle the challenges of taking your readers inside two families, but you do so over generations while exploring the depths of good and evil. What about the story and the characters excited you to write this novel?

A good deal of my work deals with family. In AMERICAN HISTORY we have two families whose adversity spans nearly a century. They are my Montagues and Capulets, my Hatfields and McCoys. They are also, ironically, related by blood. They share a common ethos—the sanctity of the family. Family loyalty is an unequalled virtue. Family honor is revered. Anything or anyone threatening family unity is the enemy. Although family honor is equally important to both families, they have dissimilar beliefs about how that virtue is defined and achieved. And therein lies the conflict. The challenge and the excitement of writing a generational novel was setting the story of the Agnellos and the Leones and their personal battles against the backdrop of major historical events and conflicts in their newly adopted country throughout the 20th century.

Who emerges as the protagonist in AMERICAN HISTORY? Tell me a bit about what you like about him or her. What surprised you as he or she came to life on the page?

There are many characters in AMERICAN HISTORY who could meet the requirements of protagonists. Even among the Leones—generally cast as the bad guys—there are honorable men. The story of the Agnellos and the Leones is—to borrow from my theater background—an ensemble piece. That being said, your question is provocative. In the beginning we are first introduced to John Agnello, just released from prison, great-grandson of the first Agnello to immigrate to America. It seemed as if John would be the star of the show. However, as the saga progressed, it was John’s grandfather, Louis, who emerged as the hero. Louis Agnello is the one true connection between the warring families. Louis has suffered longer and more profoundly than any other in this epic battle—and yet is most willing to advocate peace. In that he is, for me, very admirable.

You note the research for AMERICAN HISTORY exposed you to many new discoveries (Italian immigration, the Spanish flu, the San Francisco fire, etc.). Did it change how you view research as a writer? If so, how?

Most of my work has required research. Especially with regard to the faithful depiction of the setting, be it San Francisco, Los Angeles, Chicago, or New York. Setting is a very important component of my work, treated as a character in itself. After the first three Diamond books, additional research was required. Chasing Charlie Chan is set in 1994 and has a major storyline that goes back to the 1940s in Hollywood. Circling the Runway is set in 2005. These projects required research with regard to the times and places—music, movies, sports, social and political events.

Since I thoroughly enjoy the research for its informative and educational value, research for AMERICAN HISTORY was a particularly rewarding exercise simply due to the span of time involved in the tale.

You also noted that the immigration story in AMERICAN HISTORY parallels that of your own family in the early 1900s. Do you see your own heritage and ancestors through a new lens after writing AMERICAN HISTORY?

My grandfather came to America in 1904. He left a pregnant wife and two young children behind with the intention of later bringing his family to join him in the promised land. It took him some time, and my father did not first meet his own father until he had turned five years old. I have always considered it extremely courageous to travel to a strange land, moved by the hope of a better life for one’s family. I would be pleased if AMERICAN HISTORY is in a small way a tribute to that kind of courage and determination.

You have a rich background in sociology and social psychology. How has that informed your writing?

I never know where a book will end when I begin. What might surprise people is that I am always surprising myself as I write. 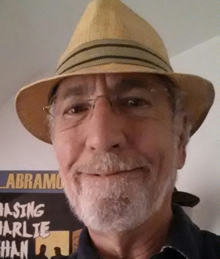