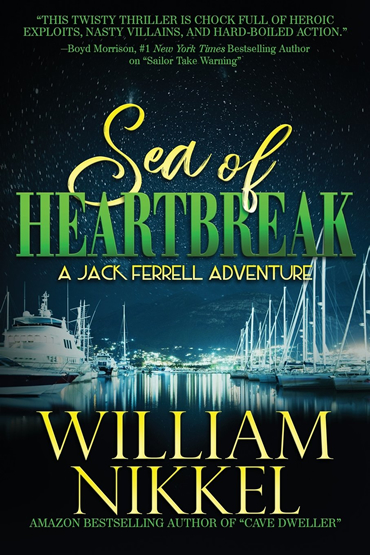 In William Nikkel’s Sea of Heartbreak, marine biologist Jack Ferrell is sailing the Kaiwi Channel near Oahu when he rescues Allison Hunter, who’d been pushed overboard by her husband and left to drown. Jack is reluctant to get involved—until his boat explodes under suspicious circumstances and Allison is killed. When he sets out to settle the score, Jack is reunited with the beguiling and mysterious Cherise Venetta. Working together to bring down a major drug trafficker, they become entangled in a web of murder, drug violence, and lost treasure.

The surging fentanyl crisis and the increase in opioid-related deaths plaguing the nation provided the idea for SEA OF HEARTBREAK, number eight in the Jack Ferrell series. Nikkel recently sat down with The Big Thrill to discuss his literary influences, the inspiration for the treasure hunt at the heart of his latest novel, and the future of his best-known character.

What research did you do for SEA OF HEARTBREAK?

I live on Maui and have visited Oahu on a number of occasions, giving me first-hand knowledge of the island. Beyond that, my research consisted of discussions with friends, law enforcement contacts, and web searches primarily centered around fentanyl manufacturing, smuggling, and just how deadly the drug can be when it is combined with street drugs and introduced to opioid addicts.

The story’s treasure hunt centers on a World War II-era gift to General Douglas MacArthur from the president of the Philippine Commonwealth. How did the idea for the treasure originate?

I’m glad you asked this. The connection to General MacArthur is entirely fictional. The idea of the gold-plated Thompson machine gun was conceived over drinks with my brother Ray, who has contributed to all my stories.

Each of my Jack Ferrell adventures has a connection, directly or indirectly, to some type of lost treasure, whether it’s the missing bones of Captain Cook in Night Marchers or gold bars stolen by the legendary California Gold Rush bandit Joaquin Murrieta in Murrieta Gold. For SEA OF HEARTBREAK, I envisioned one with a connection to Oahu and WWII. For me, that meant Pearl Harbor and the war in the Pacific.

Do you work on any particular aspect of your writing with each Jack Ferrell adventure?

With each new novel, I strive to improve my writing and create a more engaging story that ups the ante and takes Jack to a new level.

Describe your relationship with Jack.

Jack and I have evolved together. As his character broadened and deepened with each novel, so did my writing.

Jack has always been an admirer of women and a champion for the underdog—core values that won’t change. But he has evolved into a much stronger and more focused character since my first novel, Glimmer of Gold. SEA OF HEARTBREAK re-enforces what Jack has come to realize: when he’s on the edge, he’s completely alive.

What do you foresee as the future for Jack Ferrell and his adventures?

I’ll keep writing Jack’s adventures as long as there’s a story to be told and an adventure to send him on. With each new escapade, I’ll take him closer to the edge, the gray area between right and wrong, but he’ll always remain the champion for the underdog. And I’ll be further developing Cherise Venetta, who figured largely in SEA OF HEARTBREAK. Who knows where that will take me.

You’ve said you were influenced by early Clive Cussler. Who influences you now?

When I first embarked on my writing journey, I had the good fortune to attend weeklong workshops at the Maui Writers Conference, where I studied under James Rollins, Tess Gerritsen, David Morrell, and Steve Berry. Naturally, these great authors had a huge influence on my writing. Since then other greats have been added to that list: Lee Child, John D. MacDonald, C. J. Box, Stuart Woods, Michael Connelly, Kimberly Howe, Sandra Brannan, and Allison Brennan, to name a few. Each author in their own way has had an influence on my writing.

Besides taking readers on an adventure, what would you like them to take away from reading SEA OF HEARTBREAK?

I write all of my Jack Ferrell adventures with the intention of entertaining my readers. SEA OF HEARTBREAK was no different. But I can hope that in the process of providing them an escape from the routine of their day-to-day lives, they take away a heightened awareness of the devastating effect drugs, opioids in particular, have on a person’s life and the lives of the people who love them. 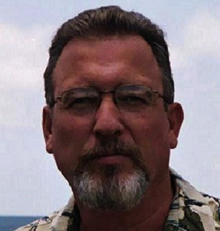 William Nikkel is the author of eight Jack Ferrell novels and two steampunk westerns featuring his latest hero Max Traver. A former homicide detective and S.W.A.T. team member for the Kern County Sheriff’s Department in Bakersfield, California, William is an amateur scuba enthusiast, gold prospector, and wildlife artist who can be found just about anywhere. He and his wife Karen divide their time between Northern California and Maui, Hawaii.

To learn more about William and his books, please visit his website.