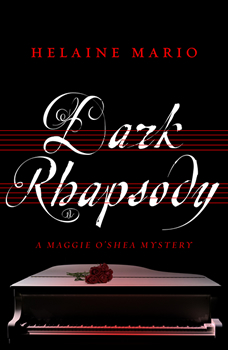 In 1945, an Austrian girl discovers a priceless Nazi treasure near a remote alpine lake and sets in motion a decades-old secret that will change lives for generations to come.

Many years later, classical pianist Maggie O’Shea is preparing her return to the world of music. Instead, a nightmare of a haunting rhapsody and hundreds of roses from a deranged stalker propel her into a world of terror. Forces drive her to revisit the mystery of her mother’s death, her father’s startling disappearance, and a terrible secret from World War II. Maggie finds herself on a collision course with a brutal, disfigured killer who threatens those she holds dear—an aging pianist with a long-buried secret, a haunted cellist, a charismatic Maestro, and the crusty retired colonel she has come to love.

Chord by chord, Rachmaninoff’s Rhapsody becomes the heart of this story of profound loss, courage and love. Music tells our stories . . .

The Big Thrill caught up with DARK RHAPSODY author Helaine Mario to discuss her latest thriller:

DARK RHAPSODY tells the (continuing) story of classical pianist Maggie O’Shea, who is drawn to Vienna in a search for her vanished father and the heir to a priceless painting missing since WWII.  My readers respond to the classical music, stories of missing art, flashbacks to WWII history, and the evocative, international settings.  They especially seem interested in my exploration of how we handle grief.  I also believe that readers are responding to the new emotional beats of aging, faith, love, family, relationships, and just ‘doing the right thing.’

I find my books fit in the overlapping worlds of mystery, suspense, romance and thriller – which suits me just fine!  I often say that my books are really love stories masquerading as thrillers.  Readers respond to my complex, ‘of a certain age’ characters, and to the intimate and international settings – and they have fallen in love with the colonel and his kick-ass three-legged rescue Golden.  But I think what sets my stories apart, more than anything else – and hopefully adds to the genre –  is the background of classical music, which almost becomes a character at times.  In DARK RHAPSODY, chord by chord, Rachmaninoff’s Rhapsody becomes the heart of Maggie’s story.  It is music that sets my books apart, music that tells Maggie’s story.

Absolutely!  I never intended to write a sequel to The Lost Concerto – so my first surprise was discovering that readers wanted to know what happened next in Maggie’s world – and so did I!  Since DARK RHAPSODY is the sequel to The Lost Concerto, I felt so responsible this time around to respect Maggie and to ‘rise up to’ readers’ expectations after the first book. Not easy, as I felt I put all of my heart into The Lost Concerto and did not want to disappoint anyone by being a ‘one-book-pony’ in this series.   🙂   But as I began to write the sequel, I discovered that several new characters were waiting in the wings who would add emotion and depth to Maggie’s story.  It was a revelation to me that I could become totally caught up in another story for Maggie that would keep her familiar to readers but challenge her to grow.  And I love my new characters…  am keeping a few for the next book!

Many readers tell me that they read DARK RHAPSODY’s ending ‘through a veil of tears.’ They are very moved, they feel, they don’t want the story to end.  I could not receive a greater compliment, as I remember the feeling of ‘falling into a story’ as a young child and, more than anything, I want to give this feeling to others.  It’s why I try very hard to write with great emotion and to paint pictures with words.  I absolutely believe that complex characters need complex plots and evocative settings that enrich the story.  Readers want, and deserve, the very best story I can give them.

Two women I never met inspired me to write fiction – Helen MacInnes and Mary Stewart.  Not teachers, but writers – queens of espionage novels and romantic suspense from 1941 through the ’80s.  They taught me about suspense, courage and love, and they inspired me with their heroic women characters.  I never took a writing class, but from these writers I learned about building page-turning suspense, finding a voice, dialogue that sounds natural, crafting an intricate but believable plot, the importance of settings, and creating an involving romance.

Like those writers who went before me, my stories have international and evocative settings, political intrigue, timely plots and complex characters.  The women in my novels, especially, are strong, intelligent, funny, loving, accomplished and brave.  Women who somehow find the courage to do the right thing, no matter what.  Who run toward, rather than away.  The woman I would like to be.

I read every single one of these writers’ books.  And I miss them.

Helaine Mario has written three novels of suspense – Firebird, The Lost Concerto, and the sequel DARK RHAPSODY. Born in NYC, she now resides in the DC area, where she is involved in outreach for women, children and families. Married 49 years, she has 2 children and 5 beautiful grands. She wants to be a storyteller forever.

To learn more about Helaine and her work, please visit her website.