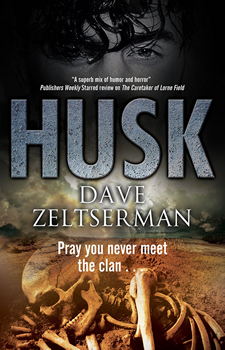 Charlie is a Husker on the prowl in the New Hampshire wilderness when he falls in love with one of them: a girl named Jill. Loving Jill means leaving the Husk clan, with its gruesome cannibalistic rituals, and that will be far more difficult – and dangerous – than Charlie could have foreseen.

It’s only in New York City that the secret to ending his terrible cravings may reveal itself – if it doesn’t kill him and everything he has grown to love first.

A darkly imagined tale, all the more frightening for its apparent ordinariness and plausibility, Husk is guaranteed to leave readers shaken, stirred – and chilled to the bone.

“The story is at once tender, brutal, fantastic, and vibrantly real. A unique and splendid novel.” ~Booklist, starred review

Award-winning author Dave Zeltserman took some time out of his busy writing schedule to meet with The Big Thrill and discuss his latest thriller, HUSK:

HUSK has two elements that I enjoy in a novel—first, it’s centered around a creepy mythology, in this case that there are cannibal clans hidden throughout the wilderness in the US, and second, a stranger trying to navigate a strange world. In this case, the stranger is Charlie Husk, who has entered our world to collect stragglers for his clan when he falls in love with an intended victim and decides to move to NY with her. Charlie will be discovering that abandoning the clan is a lot harder than he would’ve imagined.

HUSK is a creepy horror novel with a Martin Scorsese’s ‘After Hours’ vibe, as well as a distinctive noirish tone. The reader will see the world through Charlie’s eyes—a predator living among his natural prey, but someone who must tamp down his natural impulses so he doesn’t lose the woman he loves. While there are scenes of extreme horror, this book is more chilling than blood drenched, and there’s a realistic and heartfelt romance at its core. I think readers will find this book very different than other horror novels they might’ve read.

One of Charlie’s many struggles to adapt to our world is to get a job since he’s in effect an immigrant in the country he was born in. Since the clans aren’t about to produce birth certificates for the clan members, Charlie can’t get the necessary paperwork so he can work legally. While Charlie loves building houses and carpentry, these jobs are off-limits to him, and Charlie’s struggles to find employment turned out to be more touching than I would’ve imagined.

Dashiell Hammett made me want to be a writer. Jim Thompson, and the way he broke every rule, helped me find my own voice. Rex Stout and Joseph Heller helped me learn the importance of using humor and wit in my writing. Donald Westlake and his brilliant plotting and seemingly seamless prose sets an example for me every day to try and be a better writer. 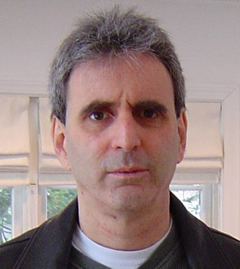 Dave Zeltserman is an award winning crime, horror and mystery writer. He has published 20 novels and dozens of short stories, and his novels have been translated into six languages. His crime novel Small Crimes, which topped NPR’s best crime & mystery books in 2008, has been made into a Netflix original film starring Nikolaj Coster-Waldau, Molly Parker, Gary Cole, Jacki Weaver, and Robert Forster. Two other novels are currently in film development. His crime and horror novels have been named by The Washington Post, NPR, American Library Association, WBUR, and Booklist as best books of the year, and his mystery short fiction has won the Shamus, Derringer and Ellery Queen’s Readers award (twice). He also writes the Morris Brick thriller series under the pseudonym Jacob Stone.

To learn more about Dave and his work, please visit his website.