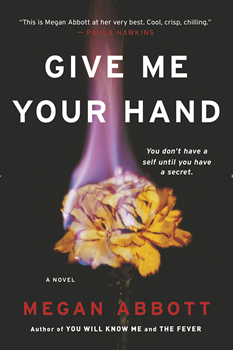 “I can’t imagine doing it any other way.”

That’s how bestselling and critically beloved crime novelist Megan Abbott reacts to a stray comment about her work, and how her novels — from her debut, Die a Little, to the just-released GIVE ME YOUR HAND — frequently place her characters in extreme, demanding situations that allow their inner desires and emotions rise to the top. Though her answer is humble and simple, like her work, the truth lies somewhere under the surface.

It’s Abbott’s potent mix of moody, ethereal prose with pitch-perfect plotting, and a keen understanding of not only character, but how her characters would respond to the suspenseful and dark things she throws into their lives, that sets her apart as an author. Abbott slyly peels away at the layers, guarding her secretive, complex creations from the outside world to create an intimate, unique relationship with the reader — one that pays immediate dividends when the tension ratchets up to a fever pitch.

In her latest, the masterful and impressive GIVE ME YOUR HAND, Abbott moves from the teenage athletic backdrops of her recent novels — the world of pre-Olympic gymnastics of You Will Know Me and the cutthroat competition of high school cheerleading of Dare Me — to another, equally intense environment: the science lab. Her protagonists, the scrappy and focused Kit and the mysterious, aloof Diane, are former high school best friends — a connection that allows for Abbott to showcase her formidable ability to channel the world of teen girls — who are thrust together as colleagues working on a high-pressure study of PMDD (premenstrual dysphoric disorder), under the watchful eye of the enigmatic Dr. Severin. The reunion is not a welcome one for Kit, who still harbors knowledge of an unforgivable secret, imparted to her by Diane, an act that left Kit feeling cursed, and Diane liberated.

The dynamics of friendship — specifically intense, formative ones forged by young women — was a topic that Abbott found compelling and irresistible.

“It’s funny, because I’ve heard people refer to Kit and Diane as frenemies or best friends, but there’s a different kind of friend, particularly with women,” Abbott said. “Friendships that are brief, but where there’s an intimacy, and these people become very important in your life at this pivotal moment, and they fire you up in some way. Diane and Kit are like that, and Diane really lights a fire in Kit that changes the course of her life. There can be these people who have a great impact on your life even if it is for a short time, and I think that that’s an under-discussed, under-explored thing, these people who come into our lives, who somehow inspire something or pull something out of ourselves, so that really interested me.”

Abbott strives to avoid pigeonholing or easily labeling her characters, who are hard to pin down and all the better for it. Instead, Abbott embraces the complexities and contradiction of real life to create deeper, layered people to populate her tense, realistic novels. 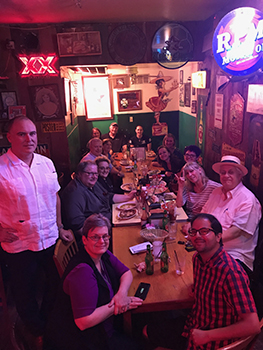 “I never really think of them that way – the good one or the bad one. That conflict starts the book, but as I write it, I start to always grow to love the darker character, and grow to wanna kind of mess up the good one,” Abbott says. “I tried to give Kit all these complications and then I started to want to give Diane more depth and a tragic sort of quality to her, so that the reader would be open to it, and might start to care about her too. And that’s always the goal — to complicate these easy constructions of good girl and bad girl.”

It’s this potent mix of strength and imperfections that make for a compelling story, Abbott believes.

“Moral structures really fall apart in crime novels in general, and then get built up again,” Abbott says. “We, as writers, are always putting characters in crisis, and that’s when they show you who they really are, and no one is simple in a crisis. No one is simple when they’re backed into a corner.”

A striking, of-the-moment novel that still manages to feel timeless, GIVE ME YOUR HAND taps into the minutiae of the day-to-day lives of scientists and their worlds, a byproduct of Abbott’s precise research and her ability to boil down these various strands of complex information into a digestible form, a balancing act that Abbott excels at — but one that is far from simple or easy to define, the author admits. 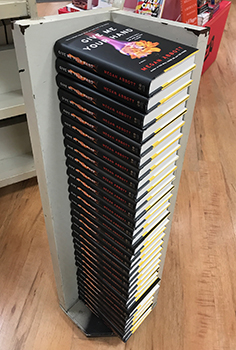 “I don’t think too much about how I want to write the book beforehand,” Abbott says. “Because you do have to allow yourself exploration, and what that involves is a lot of work that I end up throwing out. I do dump a lot of the first draft, and at the same time, I’m figuring out the research myself, what the reader needs to know and then cutting a lot of that out. And then the architecture of the book is firmed up, but, you know, when you get to the middle of the book, everything goes to hell! [laughs] It’s that middle that’s the worst, and that’s when you start to realize that your structure’s not fully sound. I had this realization about halfway through that I was going to have to drop out the past for a long stretch of the book! It was the only way to keep going. That means now the present had become more pressing and the past needs to stay in the past. And it felt like such a relief when I realized that I don’t have to just keep going back and summarizing all the time.”

It was this moment of realization, where Abbott accepted that the book would be what it wanted to be, that allowed her to push through to the end of GIVE ME YOUR HAND.

“It’s funny how you get into this mode where you think you have to do this and then you realize there are no rules about this,” Abbott said. “I had written probably another third of the book set in the past that I ended up cutting out, because I didn’t need it anymore. Because I’d figured them out by then. I pretty much understood Kit from the start. Kit’s probably the character closest to me of any character that I’ve written. But Diane’s not. She was a cypher for most of the first draft and that made me anxious at first, and then I grew to love that about her, how I had to keep going deeper and deeper.”

Thrusting her characters into these intense, unforgiving environments has become Abbott’s signature motif — one that opens the door to create fast-paced but equally character-driven and thoughtfully researched novels like GIVE ME YOUR HAND — which manages to balance and explore the complex dynamics of female friendship with the competitive, fierce world of modern science.

“I hadn’t realized this until someone asked me about it and I realized it’s a carryover from more traditional noir,” Abbott says. “This idea that you put a few people in a room, turn the heat up, and you see what happens. It’s the combination of these hothouse environments that are also subcultures. I’m fascinated by them and how they operate by their own rules. And when you write about them you have to follow those rules. There’s a set of rules if you’re working in a lab, what’s acceptable, what’s not acceptable. There is if you’re parents of prodigies. These sort of systems seem to have taken themselves out of the rest of the culture, and they’re sort of creating their own ecosystem to survive. I really like those worlds and I’m not really sure what it is about them, but maybe it’s the voyeur aspect. As writers, we’re voyeurs. So, it’s like you’re peering into this world outsiders are not meant to see.”