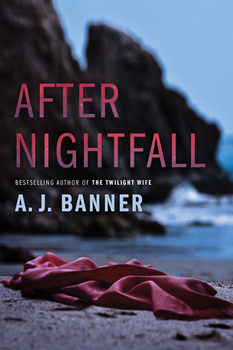 A. J. Banner’s gripping new thriller AFTER NIGHTFALL begins with an engagement dinner party that goes horribly wrong. The next morning, one of the guests is found dead—and we soon learn secrets about the other people at the party that makes everyone there a potential suspect.

So how did Banner come up with this idea for the book? She says it originated from a single sentence.

“’Lauren is flirting with my fiancé over the dinner I spent hours preparing.’—that first sentence inspired the rest of the book. But don’t ask me where I found the idea for the sentence. I have no idea how I got the idea. But a dinner party stuck in my head, a gathering after which a murder occurs, and all the guests become suspects. At first, I didn’t know who would die or by whose hand. Ideas are mysterious animals.”

Banner’s protagonist is newly engaged Marissa Parlette, who finds the body of her estranged friend Lauren—who she had recently reconciled with and reluctantly invited to the party—on the beach at the bottom of a cliff after the party. Did Lauren fall? Did she jump? Or was she pushed? Marissa desperately goes looking for answers, but instead uncovers more secrets and more questions about those closest to her—even her fiancé.

In writing AFTER NIGHTFALL, Banner described how after that dramatic opening dinner party scene in the first chapter—she then “flew into the mist” with the rest of the story.

“’Flying into the mist’ means writing an exploratory first draft, anything goes, also known as the I-don’t-know-what-the-hell-I’m-doing draft. I almost had an anxiety attack several times, thinking I would never figure out the plot. I rewrote and rewrote, changing the identity of the perpetrator, trying to fill plot holes and build suspense. When the puzzle pieces finally fit together, I was surprised and relieved.”

Unlike many suspense thrillers, Banner’s main character—Marissa Parlette—is not a law enforcement official of any kind solving a case. Instead, she’s a “normal” person—a woman who works as a speech therapist for children—that is caught up personally in the murder mystery. We asked Banner if it was difficult to write that kind of character.

“AFTER NIGHTFALL might be classified as psychological suspense, a genre in which the protagonist is often a woman in jeopardy who may not be a detective but who finds herself investigating the truth about those closest to her,” she says.

“To better understand my protagonist’s profession as a speech language pathologist (SLP), I interviewed an SLP who gave me fascinating information. My SLP friend read the first drafts of my speech pathology scenes and gently set me straight. It was tricky to make Marissa an active protagonist, to have her interact with the detective on the case and discover important clues on her own.”

The theme of AFTER NIGHTFALL, similar to Banner’s previous two bestselling thrillers, The Good Neighbor and The Twilight Wife, is that nothing is as it seems, and no one—no matter how well you think you know them—is always what they seem to be either. Banner explained why she found this a fascinating concept to write about as an author.

“We’re most vulnerable and at risk if people we trust turn out to be psychotic killers. Or not. Are they, or aren’t they? The unanswered question pulls the reader through the pages, raising the stakes. The closer someone is to you, the more it matters if they might be trying to harm you. Especially if we want so badly for them to be good. Daphne du Maurier, Patricia Highsmith, Joy Fielding, and other topnotch authors have excelled at this kind of psychological fiction with high emotional stakes.”

Has Banner ever had any real-life experiences like that—discovering secrets about people close to her—or is this all fiction? “Who, me? No, never, not in a million years. But I would argue we all have secrets.”

Her own background is pretty fascinating too. She was born in India, immigrated with her parents to Canada when she was a baby and then moved to the United States.

She remembers always wanting to be a writer. “I read The Diary of Anne Frank when I was about seven years old and couldn’t put it down. I started writing a journal, addressing my entries, “Dear Wilma,” maybe because I watched The Flintstones before our TV broke. I penned mystery stories, illustrated them, stapled the pages together and pasted copyright notices inside the front covers. I still have a few of those stories.

“I majored in psychology and anthropology at the University of California, Berkeley, and one of my most interesting (unpaid) jobs was to observe chimpanzee behavior in the local zoo for Jane Goodall’s ChimpanZoo program, which increases awareness about the plight of chimpanzees and helps zoos improve habitats and conditions for captive chimpanzees.

“Later, I tried a stint in law school, graduate school in interdisciplinary social sciences, and I worked for a veterinarian, as I’m passionate about animal rescue. I wrote profiles for coffee table history books, feature articles for newspapers, and I analyzed stock trades for an investment consulting firm—trades made by large institutional pension funds. For the moment, I’m a full-time writer. Who knows what the future holds?”

As for her writing routine, Banner likes to work early in the day–but quickly adds it’s not always her decision.

“Well, that’s actually up to the cats in the house,” she says. “They’re the bosses. I work for them. But if they allow it, my best writing time is first thing in the morning. If I don’t write first thing, the demands of the day pull me away from my manuscript.”

She is also a voracious reader of books – and not just thrillers. “I read in a variety of genres. Memoir, thriller, literary fiction, general fiction, humorous fiction, science fiction, children’s books. I believe some of the best books ever written are for children.”

And what about her own next book? “I’m working on my fourth novel of psychological suspense, tentative publication date August 2019.” 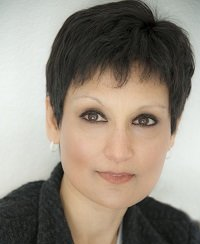 A. J. Banner grew up reading Agatha Christie, Daphne du Maurier, and other masters of love and mystery. She enjoyed sneaking thrillers from her parents’ library, which gave her excellent fodder for her novels of psychological suspense, The Good Neighbor and The Twilight Wife. The Good Neighbor was a #1 Amazon bestseller for 34 days in a row, and The Twilight Wife is a USA Today and Publishers Weekly bestseller. A. J. is hard at work on her next novel in her home office overlooking a Pacific Northwest forest.