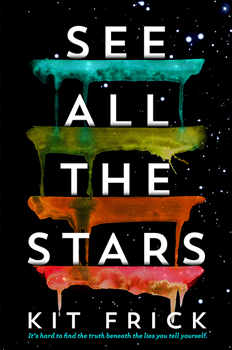 One of the underlying themes in Kit Frick’s young adult debut is about the power of facing our fears—not only for the characters in this haunting coming-of-age thriller, but for the author herself.

As a seasoned freelance editor, an entrepreneur, and a published poet and short story writer, Frick is used to being at the helm of her professional life. That changed when SEE ALL THE STARS was picked up by Simon & Schuster/McElderry.

“The thing that shakes me is the reality that in the world of traditional publishing, the author is just one part of a team, and there are countless aspects of the publication process that are largely out of the author’s control,” she says. “Letting go of that control in order to let the publication engine do its thing has been and will probably continue to be a challenge, and a little bit scary.”

Part love story, part thriller, SEE ALL THE STARS is a heart-wrenching tale told in alternating timelines—THEN and NOW—from 17-year-old Ellory’s point of view, a somewhat unreliable narrator who goes from having four close friends and a boyfriend, to being alone—and consumed with guilt—after a shocking incident that changes all of their lives forever.

It may feel like a familiar trope—the book has been described as We Were Liars meets Goodbye Days—but readers will be drawn in by Frick’s lyrical prose, a result, perhaps, of her extensive background in writing poetry.

“I studied writing—mostly poetry—throughout college, kept writing after graduation, and a few years later, I went back to school to get my MFA in poetry,” she says, noting that no, she doesn’t believe that anyone needs an MFA to be considered a “real” or “professional” writer. “I finished grad school six years ago, kept writing and publishing poetry, and also began writing fiction, which was a form that had long captured my interest but I honestly didn’t believe I had the capacity to work in, beyond short stories. I figured I’d either affirm my doubts or prove myself wrong.”

The idea for SEE ALL THE STARS came to Frick in late 2014, and she spent the next year fleshing out the story and vetting it through beta readers. Finally, in late 2015, she put the manuscript through the query trenches. She signed with her agent in spring 2016.

Frick knew from the outset that “best friends—a favorite thing—and an epic best friend break-up—a not-so-favorite thing—would be at the core of Ellory’s story.” Some other writerly fun faves like rock shows, mall dates, Manic Panic, Nirvana, and Pennsylvania (Frick’s home state) made it into the book during the revision phase.

An eclectic list, perhaps, but authentic to Frick’s vision—and the characters themselves. In fact, authenticity is another main thread that runs through SEE ALL THE STARS, from the unabashed way she tackles teen issues, to the level of “darkness” that permeates the novel, creating a true sense of suspense.

“In truth, tapping into that tough, and sometimes very dark, teen world was the easy part of the creative process for me,” she says. “I still feel like I’m sixteen most days, which is to say, my teen self is still very immediate, and I don’t have to go deep beneath my adult surface to access those emotions and experiences, which included some very high highs and very low lows.”

She believes that teens want—and should have access to—books that get dark and gritty, like life itself. In SEE ALL THE STARS, Ellory grapples with bullying, toxic friendships, emotional loss, and a lot of darkness.

“Those are experiences that will, for better or worse, be meaningful and relatable to a lot of teens,” she says. “For me, including deep or dark material in YA isn’t about testing boundaries or being ‘sexy’—it’s about storytelling in a resonant and truthful way.”

Frick vows to stay true to that commitment with her second book, another stand-alone YA thriller called All Eyes On Us, in which two girls under unbearable pressure from their families and communities receive an anonymous text that threatens to uproot their lives. Watch for this page-turner in May 2019. 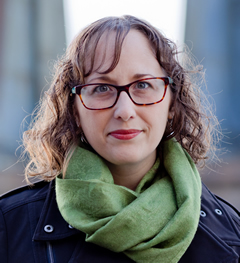 Kit Frick is a novelist, poet, and MacDowell Colony fellow. Originally from Pittsburgh, PA, she studied creative writing at Sarah Lawrence College and received her MFA from Syracuse University. When she isn’t putting complicated characters in impossible situations, Kit edits poetry and literary fiction for a small press, edits for private clients, and mentors emerging writers through Pitch Wars. Her debut young adult novel is SEE ALL THE STARS (Simon & Schuster / Margaret K. McElderry Books, August 14, 2018), and her debut full-length poetry collection is A Small Rising Up in the Lungs (New American Press, September 4, 2018).