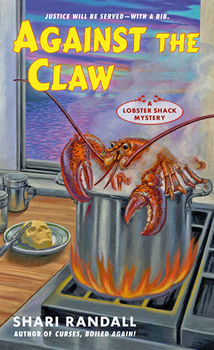 In AGAINST THE CLAW, the second book in Shari Randall’s Lobster Shack Mystery Series, injured ballerina Allie Larkin is back home lending a hand at her aunt’s Lazy Mermaid Lobster Shack. It’s the Fourth of July—the height of the tourist season—and Allie is even helping on a lobster boat.

The last thing she expects to find out on the bay is the dead body of a beautiful young woman.

When the police can’t ID the corpse, Allie takes it upon herself to learn what happened. Her investigation takes her all the way from the local piers to the secluded estates of Mystic Bay’s elite. But how can she crack the case when everyone seems dead-set on keeping their secrets beneath the surface?

The Big Thrill checked in with author Randall to learn more about the latest book in her popular Lobster Shack Mystery Series.

AGAINST THE CLAW is the second book in your series. For the uninitiated, could you give us a brief idea of what the series is about?

The Lobster Shack mysteries center around Allegra “Allie” Larkin, a dancer whose broken ankle puts her career on hold. While she heals, she returns home to the seaside village of Mystic Bay, Connecticut, and pitches in at her quirky Aunt Gully’s Lazy Mermaid Lobster Shack. Allie discovers that the tight knit New England community she thought she knew harbors long buried secrets that some will kill to keep hidden.

Tell us about your main character, Allie Larkin. What has her journey been like up to this point?

Allie has trained all her life to be a dancer, so recovery from her injury is not only a physical journey, but also a mental one. Who is she if she isn’t a dancer? Readers love Allie’s resilience and humor as she reinvents herself and deals with what could be a life changing injury.

The choice of Allie’s profession was deliberate; although she’s injured, I wanted a character who could do her own stunts and get out of the scrapes I put her in. She has a sister, Lorelei, who is as buttoned down as Allie is artistic and impulsive, and a best friend, Verity Brooks, who owns a vintage clothing store. Allie finds that her dance training and deep ties to the Mystic Bay community (bad pun alert!) give her a leg up on solving the murders in AGAINST THE CLAW.

I hope readers find this book to be a perfect escape, a New England vacation they can take without leaving their living room. Readers have sent me photos of their favorite New England places, and told me that they felt transported there while reading my book.

What elements do you think are essential for a good cozy mystery?

Many define cozies by what they don’t have: graphic violence, sex, or language. I think the essential elements for a cozy are a play-fair mystery, a vacation-worthy setting, and characters you’d like to spend time with. A little humor is necessary, because that’s true to life. The best cozies leave you longing to visit.

I did a lobster shack tour of New England to prepare to write this book and discovered, to my everlasting sadness, that I’m allergic to lobster.

Like many others, I entered the genre with Nancy Drew, the gateway drug for mystery writers. I continued with Agatha Christie and the greats of the Golden Age. Though deeply rooted in the traditional mystery, I enjoy writers who push the boundaries, like Kate Atkinson. My greatest influences are Louise Penny, who shows how mysteries can have heart; Elizabeth Peters, who showed how mysteries could have humor; and Dorothy Gilman, who showed how the quirkiest character could make a great detective. 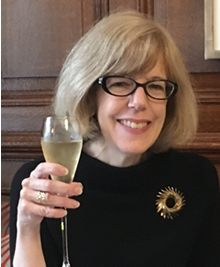 To learn more about Shari, please visit her website.