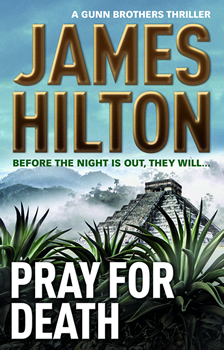 The Gunn brothers are at it again in Jim Hilton’s latest international thriller, PRAY FOR DEATH, in which the action and intrigue never let up.

Celine Chavez has disappeared while vacationing in Mexico. She’s the closest thing to a daughter Clay Gunn has, so he and his brother Danny take up her trail, which leads them into the violent Mexican underworld. They’re determined to bring her home, no matter what it takes, and they have the tools and skills to do the job.

Danny and Clay Gunn followed rather different paths growing up after their parents separated. Clay, the older brother by six years, chose to live with his father’s family in Texas. Danny spent his formative years around Glasgow in Scotland. Both wound up in elite military units—just different armies. While these are two dangerous men, they’re both quite likeable.

“Both have a wicked sense of humor and old-fashioned manners,” Hilton says. “Both are natural storytellers without making it about themselves. Both are gentlemen around women and intolerant to bad manners in others. And neither brother would class himself as a hero, but regard many of the soldiers that they served with as such.”

They may not see their own actions as heroic, but neither is willing to let injustice slide without retaliation. This makes the Mexican underworld a natural setting for their kind of action. To get a feel for what they’d be up against, Hilton studied the cartels, their methods, organization, and infrastructure for months. He found that the more you look into these criminal empires, the more you come to realize just how immense and powerful they are.

“I barely scratched the surface with Los Espadas in PRAY FOR DEATH,” he says. “An author could build their career using nothing but this cartel universe as a backdrop, much the way Mario Puzo employed the Mafia to create his fantastic works. The cartels are both fascinating and terrifying in equal measure. Many send their young men into the USA to enlist, receive military training, and then later return to cartel service as fully functioning soldiers and killers.”

This novel takes the Gunn brothers from the bright lights of Cancun to the wildest jungles of the Yucatan, where they face their most dangerous enemies. To portray these locations accurately, Hilton visited Mexico quite a few times. He says that within a few miles of the usual tourist traps lies a different world where nature is ferocious, and the jungles take no prisoners. But location is an important element in all the books of this series. Hilton used to shake his head when he heard it said that the location in a book or a movie was almost a character in itself, but he now appreciates the idea with a deeper understanding.

“I have made a conscious effort to make each novel a different experience for the reader and for the Gunn brothers themselves,” Hilton says. “I try not to repeat myself. Also, it’s no coincidence that the books have featured locations that I find of personal interest. The first book, Search And Destroy, was a modern Western and a chase rolled into one. The locations of the Nevada desert, Las Vegas, and Key West each provide gritty backdrops to the action of the story.”

In Fight Or Die, the action took place in a fictional resort town in coastal Spain. But the town of Ultima Felicidad was an amalgamation of real resort towns in the Med. Each location the brothers find themselves in provides unique obstacles to test their skills and tenacity.

“I never let them off easy,” Hilton says. “The inaccessibility of the jungle and what lays hidden within provides many challenges for Danny and Clay’s range of abilities, their particular skill set.”

Those skills include fighting techniques that Hilton can write about with authority. He trained in the martial arts since the age of 11 (Shotokan Karate, then on to Kempo JuJitsu, in which he is a 4th Dan black belt). Over the years he’s studied many styles around the world and says it has had an immense impact on his writing.

“The action in the books is grounded in real martial styles,” Hilton says. “Danny is often described as a wiry bastard and his fighting style reflects this in the techniques and strategies he uses. Speed, aggression, and surprise tactics all feature heavily in his arsenal. Short, sharp and brutal shocks are what work both in fiction and in real-life encounters.”

Clay is much larger and stronger than Danny, but he’s still not some mindless brawler. He was, after all, trained as a Ranger. In both cases, Hilton keeps it real. He shows that if you are fighting, there are consequences.

“You are going to get hurt and injured,” Hilton says, “It doesn’t matter how tough or skilled you are. No one is untouchable. I always make the brothers earn their victories, never letting them off with an easy ride.”

PRAY FOR DEATH is the third book in this series, and Hilton is hard at work on number four, with no signs of stopping.

“I would like to think that the brothers have ‘legs’ and have many stories yet to tell,” Hilton says. “I have several already story-boarded out, at least in the rough stages. I will keep on writing them as long as there are readers. There are a lot of aspects of the brothers I have yet to explore.”

How does he keep coming up with fresh ideas for the series? Hilton reveals that he usually starts with one scene in his mind, then the book grows around that scene. How did they get there, and why? As an example, he cites the scene in Fight Or Die where the brothers are forced to drive a car down an abandoned water park raft run.

“I was on vacation, enjoying a lazy river when that idea came to me. What if the park was deserted and being used by a gang as a meeting location away from prying eyes?”

Despite continuing characters, each novel is a standalone adventure. Readers can dive in in any order. So readers should feel free to start with PRAY FOR DEATH and get into the exciting world of the Gunn Brothers. 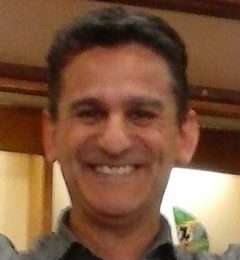 James lives in the rugged but beautiful North of England with his wife Wendy. He is the author of the Gunn Brothers Thriller series plus has been published in various fan favourite anthologies. Not to be confused with the beloved author of Goodbye Mr Chips and Lost Horizon, this James Hilton is still very much alive.

Alongside his older brother Matt Hilton (author of the bestselling Joe Hunter Thrillers), James trained in the martial arts since the age of 11, first in the strict routines of Shotokan Karate then later in the very effective combat style of Kempo JuJitsu. James is currently ranked as a 4th dan black belt. His love of martial arts in all of their variations, both Eastern & world arts has driven him to study arts from Europe, Japan, China, Indonesia and America.

His other passions include visiting Florida and the Caribbean, reading horror, suspense and action thrillers.

He is currently working on the next book in the ‘Gunn Brothers Thriller’ series from Titan Books and also researching material for the first book in a new YA series.

To learn more about James and his work, please visit his website.