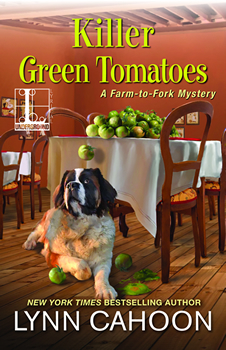 It’s often said that the Brits and the Americans are two nations divided by a common language, and there’s nowhere that’s more evident than when we’re discussing food. Or murders. Or murders with a food connection…

In KILLER GREEN TOMATOES, the second entry in Lynn Cahoon’s Farm-to-Fork Mystery series, restaurant owner Angie Turner is tasked with clearing the name of a produce supplier suspected of murdering his girlfriend. Cahoon recently sat down with The Big Thrill to answer a few questions about writing cozies, balancing male and female points of view in her novels, and the food-centric setting of her latest series.

You quickly build up a picture of the County Seat, the restaurant owned by the main character of KILLER GREEN TOMATOES. Is it based on a real place?

It’s a mixture of a lot of places. There’s a small Italian restaurant (or was) on Cole Road in Boise that had the lighted pergolas in the dining room. And I’ve mixed in a farm-to-fork place in Nashville called the Farm House. But really, it’s just a unique creation. I’ve waitressed before so I know the feel of a restaurant, even though I was in a breakfast franchise rather than high dining.

Fried green tomatoes figure prominently in the story, but they’re an alien concept for us Brits. Can you please enlighten us?

They’re so good. You take large green tomatoes, slice them thick, and then dip them in an egg wash followed by a seasoned flour mix. Fry them (preferably in a cast iron skillet) with a lot of oil over medium heat. Brown on both sides and let dry on paper towels. My family actually did fried zucchini, same process: the recipe is in the back of the book. Before I started writing, I had the opportunity to visit several southern states to try out their versions, and North Carolina has the best, in my opinion.

I was surprised to find that there’s a thriving Basque community in the US. Can you tell us more about their food and festivals?

I grew up in southwestern Idaho. There’s a Basque community in our Treasure Valley who came originally to herd sheep. Their food goes with the whole food plan—basic lamb, beef, sandwiches. For 25 years they’ve held a local festival, closing down the streets around the Basque community hall just off downtown Boise, to let food, musicians, and dancers take over. KILLER GREEN TOMATOES highlights the San Inazio Basque Festival, which is an annual event to honor St. Ignatius of Loyola, their patron saint.

Like a number of authors, you write both romance and mysteries. What similarities do you find between the genres?

I started writing romance, and the one thing that held me back was my too-large cast of characters. Romance tells a story not just about the couple but about the world they live in. That’s why I love writing cozies. Except for the dead body and lack of sex, they too build a world people want to be inside.

Do you have a fixed writing routine? What tips can you give for would-be authors to help improve their productivity?

Since I’m still working full time, my writing comes in small sections. I write at breaks at work or at lunch, I write in the morning before I go into work and finish up my daily word count when I get home. Best tip for would-be authors? Don’t think you have to have a full day or even a couple hours to start writing. Start and get words down. Then rinse and repeat. It’s all about making the writing your priority. Reading emails isn’t working. Social media isn’t working. Writing is working.

Are all your sleuths female? If so, would you ever consider having a male detective?

I like writing guys as supporting characters; I just haven’t had a guy talk to me yet to tell his story. I’m not against having a male main character, but I feel more comfortable telling the story with a female point of view. Writing romance, the author is challenged to write both sides of the story, male and female. I hope I do the male POV justice, but it’s always written with a female filter.

Finally, I have to tell you that the baby goat in KILLER GREEN TOMATOES stole my heart as soon as it appeared. Why did you choose the adorable menagerie of dog, goat, and chicken? Do they have real-life equivalents?

Mabel came first. I wanted Angie to have a living reminder of her Nona, so the hen was the first thing that came to the story. I still remember writing the first draft of that first scene. I’d been down on my knees in the dirt working the garden while chickens wandered nearby. I found Dom on a trip to Nashville. I was coming home one weekend and stopped at a rest stop. A couple was walking a baby St. Bernard; I fell in love with the puppy and he was so affectionate. I called my husband and told him I was getting one. He talked me down, so Dom went into the book as well. Precious wasn’t really supposed to go to Angie: she was Mr. Moss’s. But one day Angie was hiking, I needed a reason for her to go higher on the trail, and poor Precious had lost her mom. Yes, this is how things happen in my head. Besides, it got Ian into Angie’s life again. Anything for the love story, right? 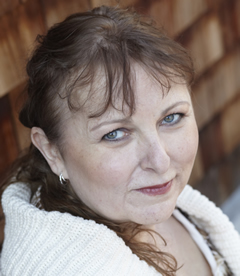 Lynn Cahoon is the author of the New York Times and USA Today best-selling Tourist Trap cozy mystery series. Guidebook to Murder, book 1 of the series, won the Reader’s Crown for Mystery Fiction in 2015. She also pens the Cat Latimer series available in mass market paperback. This year, she’s releasing Who Moved my Goat Cheese in March as part of the new Farm to Fork series. She also writes romance under Lynn Collins. She lives in a small town like the ones she loves to write about with her husband and two fur babies.