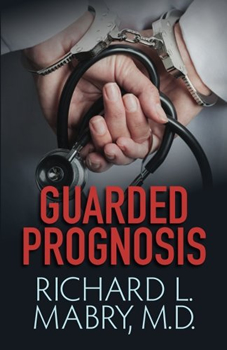 It begins when he spots two men sitting in his waiting room—and suspects that they aren’t patients. He’s right. And when they introduce themselves as agents of the Drug Enforcement Agency, things start to go bad.

Richard Mabry, author of GUARDED PROGNOSIS, is a retired physician who was encouraged by James Scott Bell to try his hand at writing fiction. His novels are based on his medical expertise and experiences.

In this latest work, Mabry says he intended to write about a physician whose father is diagnosed with a serious, often fatal condition, and the emotions and changes displayed by them both as things progressed.

“I tapped into my own experiences,” Mabry says, “when a friend found out he had a serious, metastatic malignancy and asked a friend (also a physician) and me to help him take his own life if it came to that. From there, things simply grew as I wrote the story.

“I usually try to have a second plot line as well, but my first reader and my editor (yes, I pay for an independent editor) didn’t like it. So, I trashed that one and used the DEA scenario, which seemed to work out well.”

Mabry believes one of the talents he brings to his writing is how he incorporates “the situations a physician encounters on a regular basis, the things that most of the general public wonders about, always being careful to explain medical terms without ‘talking down’ to the reader.

“I don’t start out with a specific goal other than to provide a good reading experience with each novel. They seem to shape themselves, and I’ve learned to let them. I start with a premise, and know how the novel begins and ends. Other than that, I’m open to detours. Donald Westlake called this ‘push fiction,’ and said that if he didn’t know what came next the reader certainly wouldn’t.

“I have a magnet on my refrigerator, a gift from my agent, that says, ‘First drafts don’t have to be good. They just have to be written.’ There is no question that writing the entire story for the first time is the toughest part.”

And this was true of GUARDED PROGNOSIS. The easiest part (“although it’s hard enough”) is doing the edits and revisions. A process Mabry goes through two or three times in addition to responding to the comments of his first reader and his editor.

“Although I have a general idea of my major characters in so far as physical attributes, etc., they further develop themselves as the story progresses, revealing this to me as the book goes forward. I’m a ‘pantser,’ writing by the seat of  my pants, rather than a ‘plotter,’ and this sometimes means that after the first several thousand words I’ll find I need to trash what I’ve written and start again, now that I know the characters better.”

Mabry likes the “balance that emerged between the two storylines” in GUARDED PROGNOSIS. He wanted to “explore the two themes—the rules and regulations facing doctors nowadays (and the worry they might inadvertently break one) and the fact that doctors and their families have problems, the same as all the rest of us, and sometimes their stubbornness hinders proper treatment. Doctors have feelings we often don’t think about.”

He strives to “take the reader inside the feelings and actions of medical practice – including the emotions that go along with it.”

Another element that Mabry brings to each of his works is a Christian perspective. “I write from a Christian worldview, but I don’t have any specific message I try to convey. Rather, I begin with the premise that God can and will interact with all of us—the Believer, the Seeker, and the Agnostic—if we let Him. Many physicians get so caught up in the time-consuming task of medical education that they lose sight of God’s role in the lives of the patients and their own. I do try to show that, no matter how far one strays from God, He’s always there if we look for Him.”

Next up for Mabry is his novella, Emergency Case, where Dr. Kelly Irving discovers that the snowy bump in her driveway is actually a corpse. 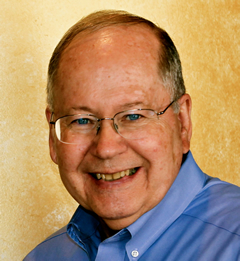 Dr. Richard Mabry is a retired physician, now writing “medical mystery with heart.” His novels have garnered critical acclaim and been finalists for ACFW’s Carol Award, both the Romantic Times’ Inspirational Book of the Year and Reviewer’s Choice Awards, the Inspirational Readers Choice, and the Selah Award. He is a member of the American Christian Fiction Writers, the International Thriller Writers, the Christian Authors Network, and Novelists Inc.

Guarded Prognosis is his twelfth medical thriller. He is also the author of four novellas. To learn more about Dr. Mabry, please visit his website.