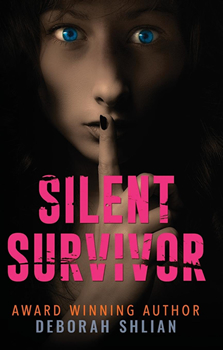 SOME SECRETS CAN BE DEADLY…

Stepping into the darkened hospital clinic, Mackenzie (Mac) Dodd hears the faint click of a revolver before spotting the barrel pressed against the young marine’s temple. Unable to stop the suicide, Mac blames herself. Encouraged by her idealistic neighbor, she posts the incident on “Silent Survivor,” a blog in which she encourages veterans with PTSD to share stories. When the marine’s widow reveals there may be more to her husband’s suicide, Mac begins an investigation, risking her life to expose secrets and betrayals as she uncovers the unintended consequences of covert government research.

The Big Thrill caught up with the award-winning author of SILENT SURVIVOR, Deborah Shlian, to discuss her latest thriller:

While this novel is a work of fiction, the main plot as well as the various subplots are based on very real contemporary issues.

For example, while PTSD has been shrouded in secrecy and shame within the military, there has been a virtual epidemic of suicides attributed to the disorder.

Sexual assault on college campuses is another of SILENT SURVIVOR’s subplots.

Finally, it is a fact that the army has been investigating psycho-pharmaceutical agents and behavior modification techniques that can diminish mental performance of our enemies, reducing their ability to fight.

This was the first novel I wrote without an outline. As a result, it took longer to finish than my other novels. However, this process allowed me to discover a character (Viv, an ethical hacker) who might never have appeared otherwise and who may now be featured in a future thriller.

As in all my novels, there is more than one twist in SILENT SURVIVOR.

Hemingway’s style of short, crisp sentences has been a major influence on my own style. I like to make the reader want to turn the page to see what’s next. Other physician writers like Robin Cook, Michael Palmer and Michael Crichton have given me the courage to put pen to paper.

Deborah Shlian, MD, MBA practiced medicine in California where she also taught at UCLA. She has published nonfiction articles and books as well as medical mystery/thrillers. Her first two novels, Double Illusion and Wednesday’s Child, were paperback originals and were optioned by Hollywood producers for film. Since moving to Florida, she has had three new novels published. Rabbit in the Moon is an international thriller and has won the Gold Medal for Genre Fiction from the Florida Book Award, the Mystery Book of the Year Silver Medal from ForeWord Magazine, an Indie Excellence Award, a National Best Books Award Finalist from USA Book News and won First place in the Royal Palm Literary Award from the Florida Writers Association. Dead Air, the first in a series starring radio talk show host Sammy Greene, won the 2010 Royal Palm Literary Award for best thriller. Devil Wind, the second in the series, also won First place Royal Palm Literary Award; First Place, Hollywood Book Festival (Audiobook version); Second place in Mensa’s Sharp Writ Award; and Finalist in the Indie Next Awards. Shlian’s newest stand-alone thriller, Silent Survivor, won First Place, 2017 Royal Palm Literary Award and will be available for sale on July 31, 2018. She has also just completed the third in the Sammy Greene series titled Deep Waters, which will be released in either late 2018 or early 2019. All Shlian’s published novels are available in print, eBooks and Audiobook format.