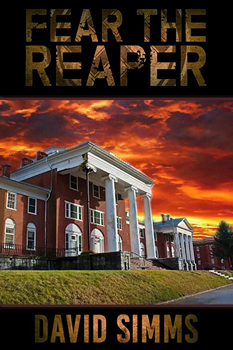 A psychologist unearths America’s darkest secret through the terrors of an asylum in 1933 Virginia, where the elite aim to eliminate millions of “unfit” citizens.

The truths that have been erased from history come to life in this thriller about the nation’s ugly and forgotten chapter.

Still haunted by the death of this wife and son during childbirth, psychologist and WWI vet Samuel Taylor accepts a position at Western Valley Hospital. Superintendent Joseph Dejarnette leads the movement to purify humanity by exterminating anyone the Society, led by the kings of industry, deemed to be “defective” or “unfit.” Sam begins to question his sanity as the mysteries of the area emerge from the shadows, compelling him to dig deeper into the horrors of the movement, realizing how complicit he is in the deaths around him. The proof he ultimately uncovers may doom everyone he holds close while influencing the world’s most heinous act in history.

The Big Thrill spent some time with author David Simms, gaining new insight to his second novel, FEAR THE REAPER:

I hope that readers will both learn from this unexplored piece of American history and be thrilled by the story that is mostly true. This frightened the hell out of me when I discovered the hospital in my adopted town in Virginia and realized what had happened there, and across the country.

In my two years of researching the book, I could not find another novel that centered on the eugenics movement in this country. There must be another out there somewhere, but I couldn’t discover it. Discussions with other ITW authors made me realize that any pieces of history which weren’t well known had to be shared with readers.

When I gave the historical ghost tours around the Dejarnette Sanitorium, the buildings that was given to Joseph Dejarnette for being an efficient eugenicist, I discovered the mass graves behind both locations. In certain areas, bodies were buried up to six deep.
What surprised me was the amount of effort by the town of Staunton to keep the secrets of the horrors that occurred there. I visited Dachau once and the citizens there own their mistakes and continue to donate to the victims of the Holocaust. We’ve got a long way to go in owning our own dark history.

As a book reviewer, I hate when secrets are revealed, but I was always trying to sneak a peek at at least one gift at Christmas.

The main character is locked in for at least two other books in this possible series as the reaches of eugenics stretched into so many areas of America. The SAT tests, the Census Bureau, vaccinations, etc. Readers will also hopefully realize that much of what happens in the story is still going on today.

I’ll steer away from the typical names here because these these people have impacted both my life and writing.

First, F. Paul Wilson. The man can nail any genre with ease and created the iconic Repairman Jack character. He’s also an amazing guy, talented drummer, and humble.
Second, Heather Graham. I doubt you can find one person in the thriller, mystery, or romance field who met her and not left feeling good about the experience. She’s been like family to me, along with her entire brood for many years and has taught me so much about the business of the writing world.

Others who have strongly influenced my career have been Alexandra Sokoloff, David Morrell, Joe R. Lansdale, and Dan Simmons. 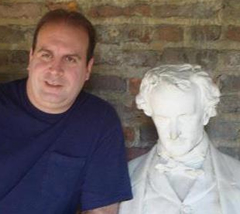 David Simms lives in the Shenandoah Valley of Virginia with his wife, son, and animals. He works as a teacher, counselor, music therapist, ghost tour guide, book reviewer, and founding guitarist in the Killer Thriller Band/Slushpile band. FEAR THE REAPER is his second novel.