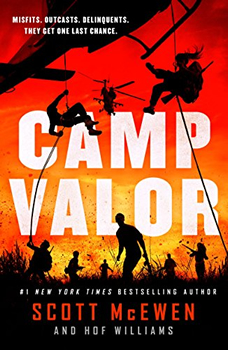 Valor: great courage in the face of danger

When Wyatt gets framed for a friend’s crime, he thinks his life is over. But then a mysterious stranger visits him in jail with an unusual proposal: spend three months in a secret government camp and have a ten-year prison sentence wiped clean.

Wyatt agrees, and finds himself in a world beyond his wildest dreams, with teenagers like him flying drones, defusing bombs, and jumping out of helicopters. This is no ordinary camp. Camp Valor is a secret training ground for teenage government agents, filled with juvenile offenders—badasses who don’t play by the rules—who desperately need a second chance. If they can prove themselves over their three-month stay and survive Hell Week, they will enter the ranks of the most esteemed soldiers in the United States military.

But some enemies of the United States have gotten wind of Camp Valor, and they will do everything in their power to find out its secrets. Suddenly Wyatt and his friends have to put their training into practice, and find the bravery to protect their country.

This book is designed for young adults with a patriotic theme. We hope the reader takes away a sense of wanting to go to Camp Valor and be that super agent!

It is different in that it is fiction with a lot of real training from the US Navy Seals thrown into the Camp.

I have been surprised at the reaction from Hollywood–extremely positive.

A kid can drive a vehicle at 140 MPH if properly trained.

Scott McEwen is the author of many books and the co-author of #1 New York Times bestseller American Sniper, which has sold more than one million copies and has been translated into over twenty languages. American Sniper, the movie, starring Bradley Cooper, and directed by Clint Eastwood, was the number one movie in the United States for that year, and was nominated for six Academy Awards, winning one. He lives in San Diego, California, where he began writing while practicing law.