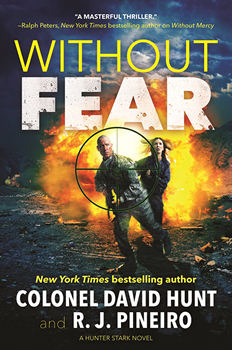 Col. David Hunt and R. J. Pineiro have teamed up for another action-packed thriller steeped in authenticity: WITHOUT FEAR, the much awaited prequel to WITHOUT MERCY.

Southern Afghanistan, 2005. NATO forces are battling the Taliban across Kandahar Province. In a terrifying twist, the rebels unearth a tactical nuclear bomb lost in the final days of the Soviet occupation. The years buried in the sand have damaged it, so the Taliban seeks the help of al Qaeda to secure replacement parts through its contacts in Saudi Arabia, the Opium Cartel, and the Russian Mafia. Doing so, however, inadvertently alerts the Americans, the Russians, and the Israelis.

Hunter Stark and his team of CIA contractors are on the chase, dispensing explosive waves of violence to track where the Taliban is hiding the weapon. But Russian Spetsnaz and Israeli Mossad operatives are also in the region following their own agendas–as is NATO–triggering chaos and confusion.

The stakes skyrocket when a courier delivers the components and the weapon becomes functional, forcing Stark to drive full throttle, without fear, into a world of terror, going beyond duty and honor to prevent the unthinkable.

Col. David Hunt & R. J. Pineiro took time out of their busy schedules to discuss their military thriller, WITHOUT FEAR, with The Big Thrill:

A detailed look at the war in Afghanistan as it was fought during the 2005-2006 years out of Kandahar Airfield under NATO Central Command. It takes you deep inside U.S. Marine Corps, Special Forces, and U.S. Air Force operations, as well as the covert action of CIA, Pakistan’s ISI, and Israeli Mossad operatives as they try to locate the whereabouts of an old Soviet-era nuclear bomb presumed unearthed by the Taliban. It offers a fresh look into the mind of still-at-large Osama bin Laden and his al-Qaeda network assisting the Taliban in southern Afghanistan. Finally, it provides insight into the Presidency of George W. Bush as well as Vladimir Putin.

It’s grippingly authentic, written by a 30-year veteran of the U.S. Special Forces along with an internationally acclaimed co-author, their second collaboration. Readers will experience first-hand the horror of this war on terror, how it’s being fought, its victories and its defeats, and how all of the action affects the courageous men and women fighting it.

Yes, the mind-boiling logistics required to keep a complex forward operating base such as Kandahar Airfield in business. The amount of effort from thousands of contractors as well as the multinational forces deployed there, all under a centralized NATO command felt as complex as running a small country. Millions of moving pieces, all working in unison to keep the war on terror moving forward. Simply amazing.

Most certainly the masters of the military genre, including but no limited to Tom Clancy, Stephen Coonts, and Larry Bond. But we have also been influenced by spy novel greats like David Morrell and Robert Ludlum. 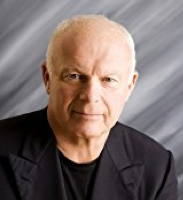 COLONEL DAVID HUNT has spent almost thirty years fighting our nation’s wars. He is a New York Times bestselling author and has been a TV military analyst for more than sixteen years. Hunt lives in Maine with his family. 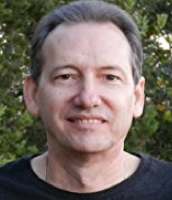 R. J. PINEIRO is a thirty-year veteran of the computer industry as well as the author of many internationally acclaimed novels, including The Fall, Without Mercy, and Ashes of Victory. Pineiro makes his home in central Texas with his wife, Lory.