And yes, readers, Aristotle “Soc” Socarides is available. Currently he’s available in Paul Kemprecos’ latest, SHARK BAIT (Suspense Publishing, April 2018). The eighth installment in Kemprecos’ Soc series finds the charter fishing boat captain/part-time private investigator up to his neck in trouble, this time trying to solve an oyster poaching scheme, captaining a boat for a film crew working on a movie based on a romantic legend involving a witch and a pirate, and trying to figure out whether the guy who had the job before him was really killed by a great white shark named Emma (whom Soc’s ex-girlfriend would like to see proven innocent).

When I first encountered Soc, I thought, Gee, a private eye who lives in a boathouse who’s good with the ladies and drinking buddies with the men? Obviously, Kemprecos was inspired by John D. MacDonald and the Travis McGee novels.

“I was really inspired to try my hand at detective fiction by the books of Raymond Chandler, Dashiell Hammett, and Ross Macdonald,” Kemprecos tells me. “Their detectives had a sense of humor and I thought I could pull that off.”

What about Jim Rockford? After all, James Garner’s classic primetime PI lived by the water.

“No,” Kemprecos says. “If any TV detective inspired me it was Harry O [played by David Janssen in the short-lived 1970s show of the same name]. Here was an ex-cop who lived in a beach house on an island off of San Diego. I liked that idea.”

So, nothing about John D. MacDonald?

“I was compared to him once,” Kemprecos says, and I feel somewhat validated until he adds, “Rather unfavorably. In fact, one reviewer took the time to point out that I was no John D. MacDonald.”

Let’s move on, then. I tell Paul I’m intrigued by his choice of epigraphs for SHARK BAIT: “To live without evil belongs only to the gods.” This is from a play by Sophocles, who even I know was Greek.

“I like to have opening quotes from the Greeks,” Kemprecos explains. “They’re usually about evil. Being half-Greek myself, and first-generation American, my background is very important to me, as it is to Soc as well. He’s not hard-boiled so much as he is philosophical. He’s very aware of his family obligations and knows that he’s viewed as a bit of a black sheep. He’s not involved with the family bakery, which is run by his mother who’s always dressed in black as she’s always in mourning for someone back in Crete.”

What about the name Socarides? Is it a family name?

“No,” he says. “It’s actually the name of a high school English teacher of mine. I always liked the name and when I shortened it to ‘Soc,’ I found it much easier to type.”

“You know,” Kemprecos adds, “Nick Charles from the Thin Man series was Greek.” I admit I did not know that. “Yeah, his birth name was Nick Charalambides. He had it Americanized for obvious reasons.”

Many readers of thrillers are surely aware that Kemprecos has also co-written eight novels with Clive Cussler in the NUMA Files series featuring Kurt Austin. What was that like?

“It was an easy relationship,” Kemprecos says. “I would send him an idea and he’d come back with a yes, no, or maybe. If and when it became a yes, I’d write up a synopsis and send it to him and we’d go back and forth until we felt it was time to write the book. I’d write about half of it and when I ran into trouble, I’d head out to his office or send pieces to him. Clive has an amazing mind for character and plot twists. We ended up doing a book a year, which was difficult, but we had a good run.”

What was the biggest thing Kemprecos learned from writing with Cussler?

“You write a sentence,” he says. “That sentence becomes a paragraph, the paragraph becomes a scene, the scenes turn into chapters, and when you get enough chapters you have a book.”

Seems like a simple formula to me. I ask Paul to tell me something about sharks that I don’t already know.

“They’re smarter than most people know,” he says. “And they’re actually real good for tourism. People still need to be careful around them. There’s a phone app called Sharktivity that shows where tagged sharks are swimming. Tourists are intrigued by sharks, so it’s not surprising that there is interest in ecotourism, where tourists can go see them from the safety of a boat. It’s obviously not a good time to go diving, because your gear might make you look like a seal and seals are the shark’s favorite food. Having to share a habitat with Great Whites truly makes you change the way you behave around the water.”

Good advice. Final question: You get the chance to put together a panel of writers for ThrillerFest—living or dead. Who do you choose and what would the topic be?

Kemprecos doesn’t miss a beat. “Chandler, Hammett, Edgar Allan Poe, and Arthur Conan Doyle. I’d just want to talk with them about how enduring the PI format is. Books, movies, TV shows. I’m especially fascinated by the current success of the many forms of Sherlock Holmes. I was watching the show Instinct the other night and there it was. Alan Cumming is basically playing a Sherlock-type character, a former CIA operative who now works with the NYPD. Just like Elementary. Maybe it’s our fascination with evil, or our love of the eccentric detective, or the Watson-type partnership, but Holmes has never gone out of style since Doyle created him.”

With Kemprecos starting his ninth book in the series, I have a feeling Aristotle “Soc” Socarides is going to be with us for a long time as well. 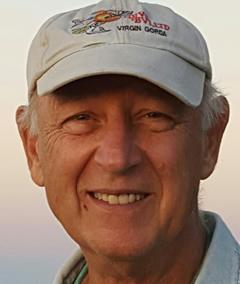 Paul Kemprecos co-authored eight novels with Clive Cussler in The New York Times best-selling NUMA Files adventure series. He is the author of The Emerald Scepter, featuring ex-Navy SEAL and undersea robotics engineer Matinicus Hawkins, and its sequel, The Minoan Cipher, which was nominated for a Thriller award by the ITW. SHARK BAIT is the eighth book in the Aristotle “Soc” Socarides private detective series that includes Cool Blue Tomb, winner of a Shamus award from the Private Eye Writers of America. He and his wife Christi live on Cape Cod.