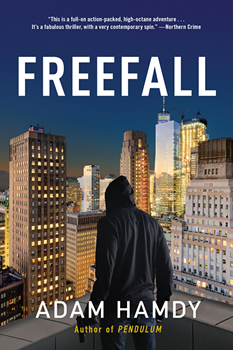 Eight months after confronting the Pendulum killer, John Wallace is losing himself in a dangerous warzone in a misguided attempt at penance for the deaths that he believes he caused. But an assassination attempt leads Wallace to realize that he has once again been targeted for death. This time, Wallace is prepared and, tracking down his would-be assassin, he discovers a link to his nemesis, Pendulum.

That link is the missing piece of a puzzle that has tormented FBI Agent Christine Ash ever since they confronted Pendulum, but with no Bureau support she has been unable to pursue her case. Wallace’s proof puts her back on the trail, but it also exposes them both to terrible danger.

Confronted by a powerful, hidden enemy, Ash and Wallace must overcome impossible odds if they are to avert a dangerous challenge to the networked world that threatens to destroy our entire way of life.

Author, screenwriter and filmmaker Adam Hamdy took time out of his busy schedule to discuss his latest thriller, FREEFALL:

I hope readers will be thrilled and entertained by FREEFALL and gain some insight into the way technology exposes us all to people with sinister objectives.

FREEFALL is a contemporary reflection of the world around us. Six months after finishing the first draft, I discovered the plot at the heart of the book had been perpetrated against Britain by a hostile nation, almost exactly as I’d imagined it. Technology is changing the world at an incredible pace, which is great news for thriller writers. We’re going to need a steady supply of books to reflect the rapidly evolving world.

FREEFALL travels the globe, from New York to London to Geneva. Parts of the book are set in Nuristan, a province of Afghanistan. Researching the lives of the people in that part of the world was eye-opening. They’ve been at war with one enemy or another almost constantly for over a century. The impact of never-ending war on the local economy and society has been profound, not to mention the tragic loss of life.

Fans of the trilogy will learn more about Christine Ash and her warped relationship with her father. They’ll gain an insight into the formative experiences that made her such a unique FBI agent.

I was raised on a diet of John Wyndham, Steven King, James Herbert, Alexander Dumas, Tom Clancy, John Le Carre and many other great crime and thriller writers. One non-fiction book that has stuck with me is I Escaped from Auschwitz by Rudi Vrba. It is a harrowing account of his experiences during the Second World War. Beneath the horror of what happened is an inspiring tale of the power of the human spirit to overcome adversity. 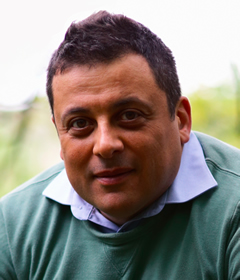 Adam Hamdy is an author, screenwriter, and filmmaker who has worked with producers and studios on both sides of the Atlantic. In addition to his own original work, Adam has adapted a number of comic books and novels for the screen, including the forthcoming film version of David Mitchell’s novel, Number9Dream. Pendulum is Adam’s third novel. Prior to becoming a writer, Adam was a strategy consultant and advised global businesses operating in a wide range of industries. Adam lives in Shropshire with his wife and three children.

To learn more about Adam and his work, please visit his website.